Tsikhanouskaya Says Her Position Is Not Pro-Western, Yet She Still Wants the West to Help 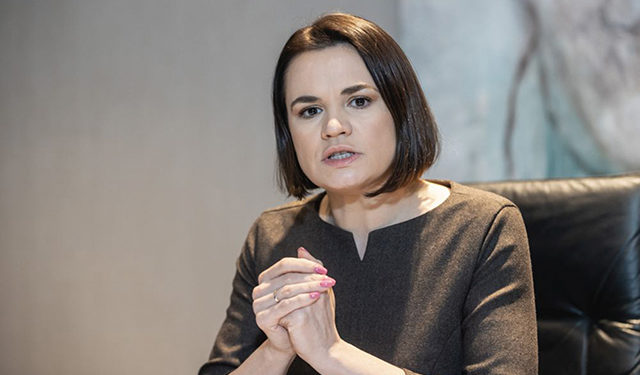 In a joint interview for the Spectator (UK) and GISP, Belarus opposition leader in exile, Sviatlana Tsikhanouskaya answered questions on her vision of a Lukashenko-free and democratic Belarus, what she expects from the West and is willing to give in return, discussed the finer points of the relationship with the Kremlin, and whether it should be expected that Belarus, should it find itself without the strongman calling the shots in all matters domestic and foreign, might entertain the notion of joining the wider Euro-Atlantic political blocks such as NATO and the EU.

The protests are ongoing, but there doesn’t seem to be significant progress in making Lukashenko relinquishin the reins. What is your long-term plan / vision of changing the stalemate?
Lukashenko the strongman, as he likes to portray himself, cannot re-establish control over the country as Belarusians peacefully protest in spite of the violence and lawlessness. More pressure, internally and internationally, will further take away resources from him. We also need make sure we are splitting the bureaucracy and law-enforcement apparatus that has essentially turned into a mass repression machine. These and other steps in sum will create conditions when Lukashenko has no other choice other than to opt for a dialogue.

What would a Tsikhanouskaya administration – or a Tsikhanouskaya-approved administration if someone else takes the lead – look like? Would officials of the Lukashenko era be arrested for crimes against the Belarusian people? The crackdown on the protests has occasionally been quite brutal.
Such an administration would oversee the transition to democratic governance, which would entail first and foremost the organization and conduct of free and fair elections. There will not be a sweeping replacement in the public service or law enforcement but those members of the Lukashenko regime who have committed heavy crimes will face a fair and just trial.

Although you have heralded a pro-Western position, you are unsatisfied with how the West has responded to the crisis. What would you say is the reason behind their reluctance to be more active? What is it ideally that you would like Europe and the US to do?
My position has not been pro-Western, just like the protest in Belarus has not had geopolitical undertones. It has been about the democratic choice which is a universal concept. Western countries have supported these aspirations of Belarusian people and we are grateful for this. At the same time, we have a sense that the steps taken by them have not been resolute and consistent, and therefore they missed a chance to be impactful in changing the behavior of Lukashenko in usurping the power and oppressing Belarusians. We are working closely with the EU and its member states, the US, UK and Canada, to keep them informed about the developments in Belarus, to jointly work out the steps in response, to consolidate and coordinate the position. Finally, we are calling friends of Belarus to be consistent in implementing the policies they are adopting.

Under your leadership – or, again, a leadership of which you would approve – would Belarus follow the paths of Georgia and Ukraine, and eventually the Baltic states, and aim to become a member of the EU and NATO?
The next leadership of Belarus will be elected by Belarusians, not approved by me, and just like in any democratic process, they will choose their leaders based on their vision for the future. For decades, Belarusians have been deprived of a competitive electoral process where people would be able to vote in favor of the policy options suggested by different candidates. What has been certain and definite about the choice of Belarusians since the last presidential elections is that they want and demand democracy where they would be able to participate in governing the country.

What would a Tsikhanouskaya administration’s relationship with Russia be like? Would you worry about provoking the Kremlin with a pro-Western foreign policy?
Once again, neither I nor my team have been advocating for or practicing a pro-Western foreign policy. It happens that Western countries have been more empathetic to and supportive of the aspirations of Belarusians to freedom and democracy. At the same time, we have been signalling to the Kremlin our readiness for dialogue. Russia has important legitimate interests in Belarus – economic, financial, investment, security and others – and we will respect them as long as they conform with the national interests of our country, with sovereignty and independence being at the top. Belarus is charting its own course of history and any comparisons would have numerous gaps and mismatches.

Belarus, under Lukashenko, has remained peculiarly neutral on issues like the annexation of Crimea or the recognition of Georgia’s secessionist enclaves – neither recognizing nor denouncing them. Would a new government in Belarus change that and if yes, in what way?
Lukashenko has been balancing on these issues, which is rather indicative that even being supposedly the most pro-Russian politician in Belarus, he would not fully support his most important ally and helper that has secured his political longevity time and again. I expect that these approaches will be reassessed and reviewed once the new administration arrives, but what changes will be adopted if at all remains to be seen.