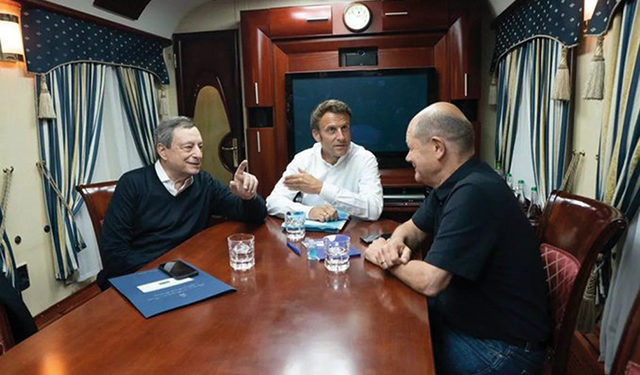 In the 15th week of Russia’s invasion of Ukraine, Ukrainian intelligence says Russia is developing plans for a long-term war.

“Where the first plan was for 10-14 days and the full occupation of Ukraine, the plans began to change, and amendments were made. Every 30 days they develop new plans. We have unequivocally confirmed data that they have a plan for the next 120 days,” he said.

Skibitsky noted the Russian forces would adjust this plan based on their success in Donbas.

The International Organization for the Study of War (ISW) says Skibitsky’s statement is likely to indicate that the Kremlin has at least acknowledged that it will not be able to achieve its goals quickly in Ukraine, and is adjusting its military objectives to address its shortcomings.

Current Key developments from the war this week include:
• The head of Ukraine’s military said Russia had concentrated its main strike forces in the north of Luhansk region and were trying to attack simultaneously in nine directions.
• Russia’s defense ministry accused Ukrainian forces of disrupting efforts to allow civilians to escape from a chemical plant in Sievierodonetsk, scene of a weeks-long battle.
• Two US citizens who travelled to Ukraine as volunteer fighters against Russian forces have been missing for a week and are feared captured, family members said. A White House national security spokesperson said if the reports are true, the United States ‘will do everything we can’ to get them back.
• US President Biden announced another infusion of $1 billion in weapons for Ukraine that includes anti-ship rocket systems, artillery rockets, howitzers and ammunition.
• Russia’s UN ambassador denounced Western countries for supplying weaponry.

Russian Attempts to Advance
The ISW says that as of June 11, Russian forces continued ground attacks in the Severodonetsk region, however, Ukrainian defenders retained control of the city’s industrial zone. The Russian armed forces allegedly resumed attempts to cross the Hirske-Lysychansk Highway and carried out unsuccessful attacks on settlements along the Bakhmut-Lysychansk Highway.

Russian soldiers continued to attack settlements southwest and southeast of Izium in order to resume their advance into Slovyansk. Ukrainian forces are likely to have resumed counterattacks northwest of Kherson, a Russian-occupied city that straddles tributaries to the Black Sea, south of their previous operations.

The Russian occupation forces distributed the first batch of Russian passports in Kherson and Melitopol.

Kyiv Pleading for Faster, More Frequent Deliveries of Weapons
Ukraine ignored a Russian ultimatum to surrender the eastern city of Sievierodonetsk as the United States announced more weapons for Kyiv, which warned that arms deliveries were taking too long. Sievierodonetsk, now largely in ruins, has become the focal point of the war. Russia had told Ukrainian forces holed up in a chemical plant there to lay down their arms from Wednesday morning as it fights for control of eastern Ukraine.

Kyiv is pleading for faster and more frequent deliveries of weapons as Russian President Vladimir Putin seeks full control of the Donbas and a swathe of southern Ukraine.

Adviser to the Cabinet of Ministers of Ukraine, Alexander Daniliuk, said that Russian forces have adopted a new unspecified strategy that allows them to make more careful maneuvers. Daniliuk added that Russian forces have more resources than Ukraine, which would be advantageous in the event of a protracted conflict. The mayor of Severodonetsk, Alexander Stryuk, said Ukrainian defenders needed long-range artillery and air defense systems to fight against Russian troops advancing in the Luhansk region.

The visit by the three European leaders has taken weeks to organize, with the three men looking to overcome criticism within Ukraine over their response to the war. Kyiv has criticized France, Germany and, to a lesser extent, Italy, for alleged foot-dragging in their support for Ukraine, accusing them of being slow to deliver weapons and of putting their own prosperity ahead of Ukraine’s freedom and security. (Reuters)

Gazprom reduces gas supply to Germany by around 60% in two days
Russian energy giant Gazprom has begun reducing the volume of gas it supplies to Germany via the Nord Stream 1 pipeline to a daily maximum of 67 million cubic meters early on Thursday.

Overall, the cut represents an approximate 60% reduction in gas supplies to Germany in just two days.
German Economy Minister Robert Habeck accused Moscow of attempting to create unease and increase gas prices. He added that it was still possible to source alternative gas supplies on the market, albeit at a high price. (Deutsche Welle)

Ukrainian grain shipments have stalled since Russia’s invasion and ports blockade, stoking global prices for grains, cooking oils, fuel and fertilizer. The United Nations is trying to broker a deal to resume Ukraine exports and Russian food and fertilizer exports, which Moscow says are harmed by sanctions.

Biden announces new $1 bln in weapons for Ukraine
President Joe Biden on Wednesday announced a fresh US infusion of $1 billion in weapons for Ukraine that includes anti-ship rocket systems, artillery rockets, howitzers and ammunition. In a phone call with Ukraine President Volodymyr Zelensky, Biden said he told the embattled leader about the new weaponry.

“The United States is providing another $1 billion in security assistance for Ukraine, including additional artillery and coastal defense weapons, as well as ammunition for the artillery and advanced rocket systems,” Biden said in a statement after the 41-minute call.

It said the agriculture sector had so far suffered losses of $4.292 billion. It estimated that the number of animals killed in areas affected by fighting included 42,000 sheep and goats, 92,000 cows, 258,000 pigs and more than 5.7 million birds. (Reuters)