The War in Ukraine and Evolving Georgian-Russian Relations 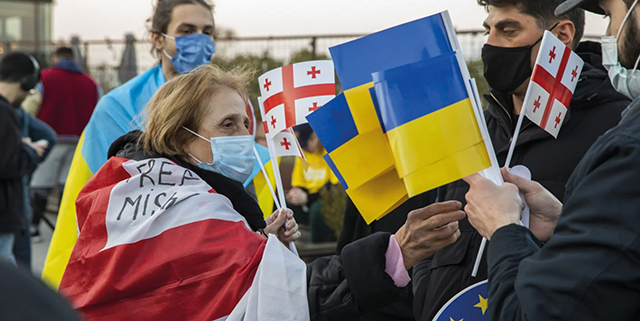 Russia’s war on Ukraine upended the regional balance of power. Vulnerable states bordering on Russia now seek greater support from the West to balance the Russian threat, efforts which have borne some tangible results, with Ukraine and Moldova being offered significant economic support and granted EU candidate status.

At the same time, third of the trio, pro-Western actor Georgia, has been a critical player in the EU’s expanding influence in the wider Black Sea region, but as of late, the country has slipped to last place in the trio pursuing the Euro-Atlantic foreign policy course. This was evidenced by the EU’s decision not to grant Tbilisi candidate status, only “European perspective,” a move thought by many to be sending a negative signal to Russia. Many compared it with 2008, when Georgia was denied a Membership Action Plan at the NATO summit in Bucharest, which led to the Russian invasion in August of the same year. Credible comparisons could be drawn, but the situation presently is much more critical for Moscow, and engaging in a military and aggressive diplomatic campaign against Georgia would bring little benefit to Russia while it is occupied in Ukraine.

Beyond the intra-party clashes about the legitimacy of elections, there is a growing chasm between political elites and the challenges faced by ordinary people in their daily lives

Since the war in Ukraine, Georgia has maintained a rather careful position. It has not joined anti-Russian sanctions and has supported Ukraine in international fora. Tbilisi has also abstained from openly criticizing the Russian military aggression, but has shown support for the Ukrainian population through sending immense humanitarian aid and accepting Ukrainian refugees. This careful, though often criticized, position has helped Tbilisi maintain a stable economic position. It could also be seen as a signal to Russia that Georgia should not be regarded as an enemy.

Tbilisi is engaged in a classic realpolitik when, amid the shifting balance of power, it faces a revanchist Russia which could either win or be defeated. Small and unprotected states are also playing their game as the period of uncertainty continues. From Tbilisi’s perspective, what would the region look like if Russia achieved its strategic aim in Ukraine? It would surely pursue its agenda in the South Caucasus, where it will try to squeeze the West out by forcing Tbilisi to abandon an openly pro-Western political course.
Georgia is also worried that there are no concrete Western military guarantees that would cover the country’s security. Thence comes Tbilisi’s “dance” when it occasionally criticizes the West and wants to present itself as a sovereign state capable of defending its national interests.

Georgia’s “dance” was rather well received by politicians in Russia. No public criticism against Tbilisi has been made since the war started, and a series of public statements and policy moves indicate that the Kremlin has carefully measured Georgia’s position. When Anatoly Bibilov, the former leader of the separatist South Ossetia, announced that the occupied region would be aiming to join Russia, the Kremlin abstained. Similar hesitancy was reflected more recently when Alan Gagloev, the new leader, also hinted at becoming part of Russia – Putin’s spokesperson, Dmitry Peskov, nearly ridiculed the idea.

It is still far from calling it a tangible rapprochement, but there clearly is an emerging understanding between Tbilisi and Moscow as to what the limit to Russia’s behavior is beyond which Georgia would strongly lean toward NATO and the EU. Therefore, any move toward annexing Abkhazia and South Ossetia would result in greater cooperation between Georgia and the Western alliances.

Yet, there are no illusions in Tbilisi that Russia will be ready to make major concessions in order to widen the divide between Georgia and the West. The recognition of Abkhazia and South Ossetia will remain in place, and the Kremlin will try to further increase its influence in the two regions. “Borderization” will also continue, as will occasional kidnappings of Georgian nationals by separatist forces. All of this shows that the limited understanding is more of a tactical nature than a concrete long-term process. The occupation of nearly 20% of the Georgian territory will remain a major dividing point which would constrain any serious attempt to improve bilateral relations.

Russia’s Biggest Ally – Georgia’s Internal Polarization
Russia also sees that Georgia is not in a position to maintain the initiative in the bilateral relations for long. Internal weaknesses hamper Tbilisi’s more robust foreign policy. The political parties fail to bridge the differences on critical questions of national importance. Beyond the intra-party clashes about the legitimacy of elections, there is a growing chasm between political elites and the challenges faced by ordinary people in their daily lives. Tackling these challenges successfully will not be easy.

Both the ruling party and the opposition have been facing declining support from the public at large. Long-term economic problems, which have been greatly exacerbated by the pandemic, have not been credibly addressed by either side. Instead of solutions, both sides have engaged in political theatrics. For many voters, the current crisis is more about a struggle for political power than about democracy and the economic development of the country. No wonder that most people consider their social and economic human rights to have been violated for decades, no matter which party is in power. These attitudes help explain high abstention rates during the most recent election.

At the end of the day, democracy is about a lot more than finding an intra-party consensus or even securing a modus vivendi in a deeply polarized society. It is about moving beyond the push-and-pull of everyday politics and addressing the everyday needs of the people. No party has yet risen to the occasion. Georgia’s NATO and EU aspirations remain a touchstone for Georgian voters, and both parties lay claim to fully representing those aspirations. But only through credibly addressing Georgia’s internal economic problems can these aspirations ever be fully realized. The party that manages to articulate this fact would triumph.

Given Georgia’s vulnerabilities, the Russian perspective is quite straightforward: Tbilisi is unlikely to become a NATO or EU member state any time soon. The need for rapprochement is not critical either, though, and some understanding of this is indeed emerging. The two sides are carefully measuring each other’s red lines, which has led to more predictable bilateral relations over the past several months.