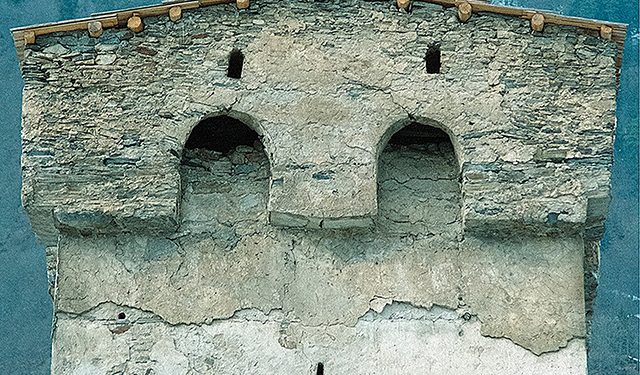 Fifteen-year-old Khalina has been dreaming of a Svan watchtower with only two top “eye” windows on each side, which to her resembles a warrior’s helmet. A face appears there, and it begins talking to her; she has just learned that each tower is also a whole city-state for thousands of denizens of all shapes and sizes.

—All happening right around us, and under our feet, as we walk through you towers ourselves… I had no idea. I must be careful whom I disturb!

Now, I’ve heard tell that the towers in faraway Ushguli are much more varied than ours in Seti, which all have either two or three eyes on a side. There, you can see a twin pair built touching all the way up—six eyes on the wide sides, three on the others! And a short, fat one with four eyes on opposing sides, five on the others. Plus, many other differences in size and shape. So… did the builders experiment there first, and settle on the standard forms which they then made in Seti? Or did they standardize here, and then grow bored and play with the form there?

—Ahhh, this is a deeper question than you realize; or perhaps you are that cunning, girl? On the answer hangs the AGE of the towers in these two communities. And a mountain-sized dollop of your petty pride to go with it. This I will not answer, and have one of your communities strut over the other! For now, I will also not comment on the question of whether the Mongols who plagued the lowlands have ever reached your highlands—or is this yet to come?

—I did not mean to offend…

—Oh, I am not offended. I merely point out that centuries of watching have shown us more of you little builders than you know of yourselves, perhaps. And our memories are as old as we, many of your lifetimes. Do not fret: you are what you are, although you can also improve much.

As for why there are so many of us towers in each community: It has become clear to us that your own worst enemy always comes not from without, but from within: you, yourselves! You are so jealous of each other’s success that none of you can bear it. You fight against one another, bitterly remembering past wrongs instead of laying them to rest. And so it goes on. We towers are more than a symbol: you attack each other with rock, arrow and spear from our fastness, spit on each other from one of us to the next! If you ever banded together, you would be a mighty force indeed. Do you not know of the description one of your own ancients wrote of you, even before we were raised, that you could summon an army of two hundred thousand men? Or is this yet to be rediscovered among you, though known to the outside world? I sometimes get my times mixed.

—I’m afraid this description does match what I have heard and seen. How wrong we are! How can we ever change or go back to those glorious times of unity?

—If you did, now, you might reach out far beyond your own determined borders and do some conquering of your own. Your nation is only now in the process of uniting for the first time as one kingdom; it would be a shame to undo all of that, ringed about as you are with so many enemies eyeing your beauty and resources. Let the main enemies of Georgia be from outside, at least, not from inside!