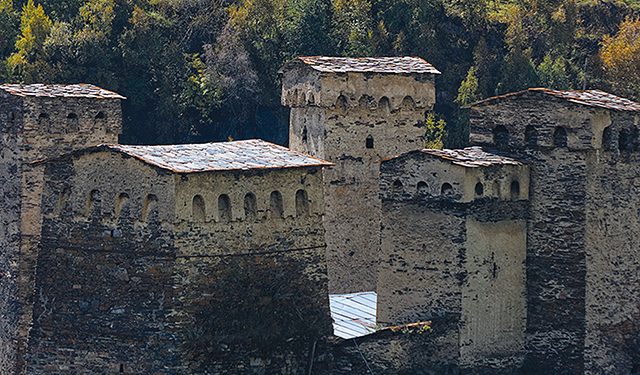 This one, Svan Tele number 4, I dedicate to Nodar Aprasidze, my blood brother and one of two best men at my wedding. You’re the reason I live in the village of Etseri, your own home place. And it’s your portrait which eventually will be revealed to be looking out from the tower too.

Khalina dreamed that she saw a stone watchtower with two main top windows on each side; and was struck by its resemblance to a warrior’s helmet, with the windows spaced just right for eyes to look out from. Then she woke up, but she could not get the image out of her mind. Once her morning chores of milking and mucking out were done, she went on a walk around Seti to see what she would find with her newly opened eyes.

Sure enough, there were a number of two-eye watchtowers mixed in with the three-eye ones, and only the former gave her the returning stare of a helmeted man in the crisp spring air. Strange how she had never noticed them before in all her fifteen years’ life here! But she kept this thing to herself for now, trying to make sense of it. The towers were everywhere, dominating the landscape of this town, as well as most other villages of Svaneti and some communities quite far away. But there were no enemies threatening to invade at the moment, had not been for the memory of all the elders still alive as far as she had heard. In the lowlands of Georgia, yes, plenty of trouble from every greedy side, more of it than peace. Svaneti was so inaccessible, though, that it had become the repository for the country’s royal treasure. Horse load after load had been sent up, quietly, during calm years, fabulous painted or chased gold or silver icons, handwritten Bibles in the original script of the country with jeweled metal covers, now locked up in ancient village churches and displayed usually only on their saint’s day. So the watchtowers, in the absence of marauders, were watching… what?

That night, tired out from helping her mother with cooking and washing up for the family, she went to bed and fell asleep almost instantly in the cool mountain air. And was transported.

She stood before one of the Helmeted Ones, as she now called them. A face appeared, but the mouth was sealed with a black vertical slash: one of the narrow windows from which to fire arrows. And yet there was a voice to go with the eyes coolly regarding her form frozen below. He was talking straight into her mind!

—Do you accept, girl, that most of what I tell you must remain between us for now? Not an easy burden, but a necessary one. I would tell you because you have perceived me for what I am: not just a place for others to watch from, but a being who himself watches.

—You could easily refuse, and then this would be as far as our communication went, a fanciful though short dream. There is more, though, much more, if you are willing.

—I still accept. Tell me, Helmeted One.

—It should be no wonder that I watch, along with most others of my kind. Svaneti itself is full of life, in its very bones the rocks and mountains, as well as in things which you humans know to be alive, the trees, flowers, animals and birds. And we towers are made of those living bones, their life even concentrated in us by the act of your people’s quarrying, gathering and mortaring the rocks of which we are made. Plus, our foundations go deep, deep into the earth, and there connect with all that life.

—Surely, though, the enemy is an outsider? Would not one of you suffice for each village’s protection, put in a high enough place to see danger coming from any side? Why are there so many of you here, for example, in Seti, but also in every village of my province?

—There is a sad truth here. I will work up to it. First, more of ourselves.
Each of us is not only the edifice which you see, but a whole city-state. The inhabitants are varied: the raptor-birds making their nests high up in our structures; their prey, the rodents of all sizes which run through us, our little crevices their streets, as well as the smaller birds; and their own prey, the myriad insects and worms for whom one of us is like a whole world.

Continued in next week’s GT.