The Potential in Georgian and Cypriot Naval Cooperation 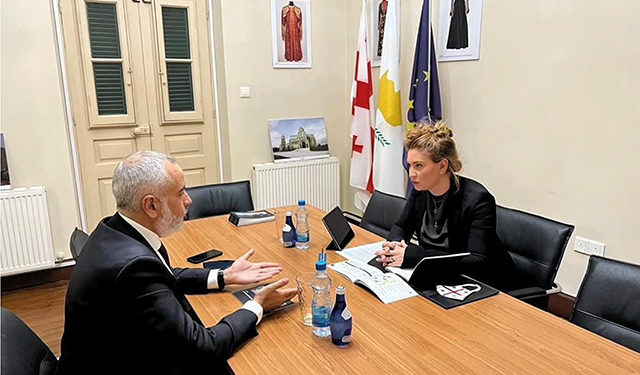 Georgia recognizes that it can learn from Cyprus, which walked the same road towards its accession to the EU… One might think that Cyprus is a small country, not one that might decide the fate of the EU. But for Georgia, it is very symbolic because Cyprus has already walked the path we are on today. Cyprus achieved its result in 2004 and knows that path. – said President Salome Zurabishvili.

When viewing the broader intergovernmental relationship terrain of Eastern Mediterranean and Black Sea nations, Georgia and Cyprus do not often make large waves. In the shadow of larger regional players such as Turkey and Russia, Cyprus maintains a low profile. However, the connection between both Georgia and Cyprus made headlines when the former made an overt escalation of diplomatic ties.

Georgian President Salome Zurabishvili paid her first official visit to the island nation of Cyprus in early November. At the same time, the Georgian Maritime Transport Agency also engaged their Cypriot counterparts in a new discussion on partnerships. This culminated in a new Joint Maritime Committee agreement.

The agreement is angled at expanding the education and training of their maritime assets, sharing techniques and procedures in the fields of research, and innovative new methods of interlinking maritime industries to create maritime clusters.

These maritime clusters consist of various entities, both private and public, that operate in close cohesion to develop the maritime and naval fields of a nation. Cyprus, since its independence in 1960, has rapidly grown its standardization measures as well as expansion of its ports. In addition, Cyprus has commissioned multiple naval patrol vessels from other EU member states, thus expanding its defensive naval capabilities.

This EU membership is something the Georgian President made significant note of during her visit, stating that Cyprus is not far ahead of the position that Georgia finds itself in today; the pursuit of EU member ascension. Since joining the EU in 2004, Cyprus has adopted many of the now-standard European economic and political customs.

While these trade, technology, and general maritime partnerships are the first ripples in a wave of new development, the national security implications run under this current of cohesion. Cyprus and Georgia are of surprising similarity in terms of technology, research and development, and operational capabilities and restraints.

From the outset, Cyprus was forced to rapidly develop its security infrastructure. Internal strife and invasion plagued the country during the 1960s and 1970s. In the Turkish invasion of 1974, the majority of the naval vessels of the Cypriot Navy were sunk in an almost mirror image to the Georgian Navy in the 2008 Russian invasion.

In another kindred image between these two nations and their naval component, Cyprus also has no large capital or significant warships. Despite their location as a key strategic island in the Eastern Mediterranean, they have yet to expand from coastal patrol and littoral tactical vessels. Nonetheless, they have repeatedly purchased quality ships from EU partners such as Italy, Spain, and France.

The new collaboration and sharing of relevant maritime data stands to allow both nations to operate with unusual effectiveness despite their small size. Manufacturing procedures, new technologies, and shared experience as a naval underdog in combat situations all make these two nations ripe for increased partnership.

This partnership needs to bring the two nations and their fledgling naval forces into the spotlight of European and American support programs. With so many capable warships being retired, Georgia and Cyprus make excellent candidates as recipients for these vessels. The Cypriot navy, similar to the Georgian, is too small to be of effective use for NATO or other operations.

Being composed of Offshore Patrol Vessels (OPV), Fast Patrol Boats (FPB), and Fast Attack Crafts (FAC), their combat efficacy is somewhat limited. Faced with larger threats, these craft are incapable of properly defending the coast. As such, the relationship between these two nations must evolve into a combined effort to acquire modern warships and achieve naval relevance.

The requirement for these nations to arm themselves accordingly will not go unheeded, as European and American partners continue their investment in these nations. The practicality of keeping these two in the NATO fold are key to ensuring the security of Central Asia as well as potentially stymieing Russian advancement. Georgia and Cyprus, paired and in similar predicaments, are the sabre’s edge in maritime trade, security, and defense.