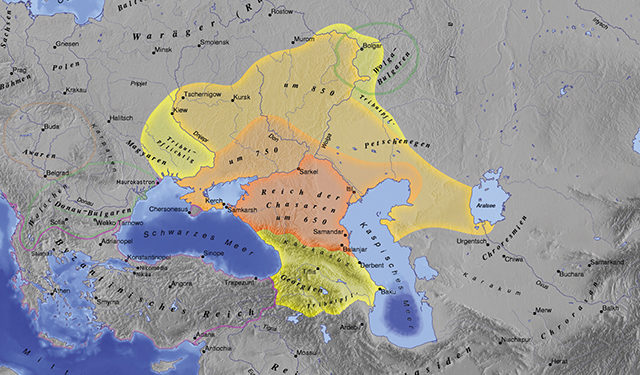 Harnessing the Eurasian lands has always been difficult. The Khazars, an obscure people from the steppes that converted to Judaism many centuries ago, stand out as an exceptional example of how geography, economy, and religion can be used to advance geopolitical interests.

Halford Mackinder, father of geopolitics, who laid out the concept of a heartland encompassing central and northern Eurasia, maintained that Russia was the first power ever to manage to harness the power of geography and economy in northern Eurasia. The Khazars, an obscure people that existed well before the modern Russian state, might beg to differ.

The Khazars were neighbors to two world powers: Byzantium and the Islamic caliphate. At the time of the united and relatively strong Islamic empire (the seventh to the tenth centuries) that dominated the vast territory from Spain to Central Asia, the Khazars, a nomadic people from the Eurasian steppes in the North Caucasus and the territory north of the Caspian Sea, created a large, powerful state.
Reports from Islamic historians and geographers, as well as archaeological evidence, suggest that along with nomadism, agriculture was widespread among the Khazars, and they were able to produce goods.

These details suggest a rather inconspicuous people on a par with other nomadic peoples of the past.
However, a closer look at the Khazars (whose language and ethnic origin remain obscure) suggests that they were quite a bit more interesting as geopolitical actors. Their understanding of geographic space and their ability to harness the power of their lands allowed them to stay relevant for centuries.

Furthermore, their religious policy (they chose Judaism as their state religion) was remarkable, as they lived in close vicinity to an Islamic world that was condescending toward other religions.

But let us start with their geographical knowledge and their drive to use geography for the advancement of state interests. The Khazars built their state at the crossroads of two strategically important trade routes. One ran from the Baltic Sea in northern Eurasia to the Caucasus, the Caspian Sea, and the Near East; the other ran from Central Asia (Khwarazm) to modern-day Ukraine and the territories of western Russia.

The Khazars thus placed themselves at a major transit point. Traders, both Muslim and Jewish, from the Near East, Central Asia, and lands that are now Russia and Ukraine, visited Khazaria and its capital, Itil, on the river Volga.

It is astounding how well the Khazars understood and used geography to attain their economic and political goals. They managed to control the major rivers of the region: the Volga, the Don, and various estuaries running toward them. They built fortresses and collected taxes at the rivers’ major entrances and exits. Moreover, the Khazars were in contact with the Baltic Sea and even with eastern and western Europe. Ninth-century geographer Ibn-Khordadbeh recorded that Jewish traders from Andalusia (Spain) visited Khazar lands. Trade was so active that millions of coins have been found in lands north of the Black and Caspian seas.

The Khazars’ geopolitical thinking was also visible in their desire to control strategic passes and cities such as Daruband, between the Caucasus Mountains and the Caspian Sea, at the point where the pass narrows to only three kilometers.

These strategic moves by the Khazars led them to clash with the Islamic empire, which also aspired to control key crossings, roads, and transcontinental trade routes.

In the west, around the Black Sea, the Khazars found themselves facing the Byzantines, who also aspired to control trade and strategic fortresses around the sea. However, because the Muslims had been largely victorious against the Byzantines, the latter decided to ally with the Khazars, using the logic that a Byzantine-Khazar alliance would be too much for the Muslims from a strategic point of view.

The Islamic empire likely concurred with this assessment, which probably explains why it established a sudden peace with the Khazars in 750, when the Abbasids came to power and moved the imperial capital from Damascus to Baghdad.

The Byzantines and the Muslims were thus locked in a battle for a strategic alliance with the Khazars. Both sides made economic and religious tools in their attempts to sway the Khazars.

Remarkably, the Khazars responded to the dual courtship of the Christian and Islamic empires by making the strategic decision to adopt neither of their religions but convert to Judaism instead. This decision suggests that the Khazars’ strategic thinking extended well beyond geography and trade.

Muslim travelers to Khazaria, as well as Muslim historians and geographers, made note of the cleverness of this choice of state religion. The Judaist state was very tolerant of foreigners as well as of local and world religions. The Khazars’ judicial system consisted of Jewish, Muslim, Christian, and pagan “judges” who tried cases concerning major disagreements.

The Khazars’ understanding of geopolitics was manifested in their drive to dominate river, military, and land trade corridors and correlate geography with the economy. They achieved significant geopolitical power by establishing wise strategic alliances to counter Byzantine and Islamic military, economic, and religious influences.