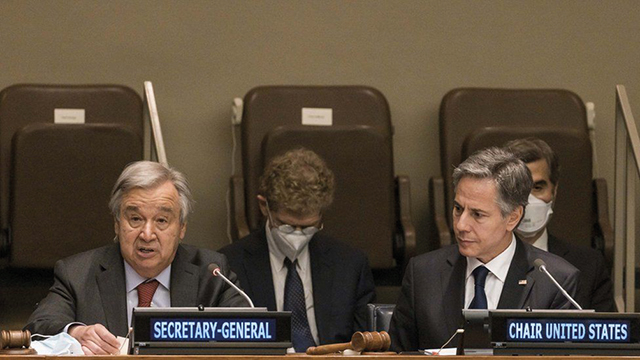 Top United Nations officials are leading negotiations on a package deal to ensure that both Ukraine and Russia can export stalled shipments of grain and fertilizer, “which will somehow refill a global market in dire need of food as severe hunger crises loom,” UN Secretary-General Antonio Guterres said Wednesday.
The announcement from Guterres came the same day the organization released a bleak new assessment on the ways Russia’s invasion has “exacerbated a global cost-of-living crisis unseen in at least a generation.” The report warned of worldwide social and economic upheaval if world leaders do not act fast.

Russia’s invasion has devastated and reshaped Ukraine, and its impact has also rippled out far beyond both countries’ borders, affecting millions worldwide by sending food and fuel prices soaring and driving up the cost of living, the United Nations reported.

Key updates of the 14th week of the war include:

In Eastern Ukraine
Luhansk regional governor Serhiy Haidai on Wednesday said Ukrainian troops were facing an onslaught of Russian shelling that is targeting Ukrainian-held supply lines in Severodonetsk, where Moscow claims it now controls 97 percent of the territory.

“Fierce battles are taking place. Our defenders are fighting for every inch of the city,” said Serhiy Haidai, current Governor of Luhansk Oblast, acknowledging that Ukrainian troops may need to “withdraw to stronger positions.” However, the Ukrainian side says their fighters are not going to surrender.
Images collected by US satellite company Maxar Technologies show the destructive path of Russia’s invasion in Luhansk and Donetsk, as it intensified its attacks on the eastern provinces in recent weeks.

In Rubizhne, near Severodonetsk, before-and-after pictures show parts of the city reduced to rubble.

In Crimea
Moscow claims it has restored rail and road links to the annexed Crimean Peninsula via the Ukrainian cities it now controls — including Mariupol and Melitopol. Capturing Mariupol last month after a bitter fight provided Russia with a vital land bridge to the peninsula, which it annexed from Ukraine in 2014.

The Russian military says the ports of Mariupol and Berdyansk have been demined and are ready to ship grain.

In Zaporizhzhia
Zelensky has warned that Moscow is preparing to seize the major southeastern city of Zaporizhzhia, which would give Russian troops better access to the center of Ukraine. Ukraine has appealed to the International Atomic Energy Agency and the UN Secretary General to “liberate” the city’s nuclear power plant that has been held by Russian forces since March.