Russia’s Invasion of Ukraine: 9 Weeks In 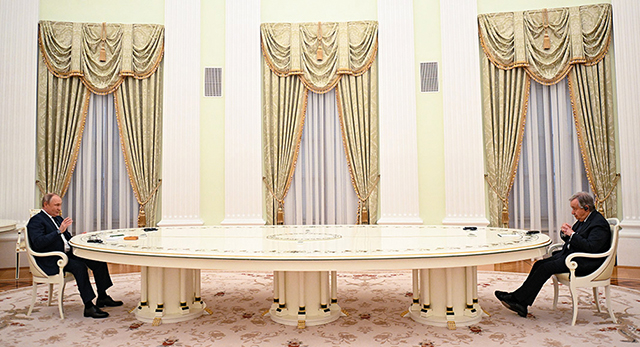 In the 9th week of the devastating war in Ukraine, the Kremlin halted natural gas shipments to Poland and Bulgaria in its toughest response yet to European sanctions, and explosions inside Russia near the Ukraine border have raised fears that the war might spread. Inside the country, Mariupol’s last standpoint is being bombarded as leaders and citizens demand the opening of a humanitarian corridor for trapped citizens.

The highlights of another week of Russia’s invasion of Ukraine are as follows:

Airstrikes on Azovstal Plant, Street Fights Continue
Russian forces were on Wednesday pounding the Azovstal steel works in Mariupol where the southern Ukrainian city’s last defenders and some civilians are holed up, a local official said.

Petro Andryushchenko, an aide to the city mayor, said there had been no let-up in airstrikes on the Azovstal plant despite Russian President Vladimir Putin saying there was no need to storm it after declaring “victory” in Mariupol.

He added that street fighting continues on a part of the plant territory and noted that no agreement was reached on Wednesday to try to evacuate the civilian population from Mariupol.

On Wednesday, Ukrainians held a rally in the capital city of Kyiv to demand foreign leaders step in to open a humanitarian corridor for those trapped in Mariupol.

UN Secretary-General Antonio Guterres Meets with Putin
Russian President Vladimir Putin agreed “in principle” to the United Nations and the International Committee for the Red Cross becoming involved in the evacuation of civilians from the Azovstal steel plant in Mariupol, the UN said.

Putin made the concession to UN Secretary-General Antonio Guterres during their meeting in Moscow.

In televised remarks, he told Guterres that he still hoped for negotiations to end the conflict.

“Despite the fact that the military operation is ongoing, we still hope that we will be able to reach agreements on the diplomatic track. We are negotiating, we do not reject [talks],” Putin told Guterres.
Guterres reiterated his call for Ukraine and Russia to work together with the UN to set up aid and evacuation corridors to help civilians in Ukraine. Guterres earlier met with Russian Foreign Minister Sergey Lavrov where he called for a ceasefire.

Standing beside the wreckage of residential apartment blocks in Borodyanka, just north of the capital, Guterres was clearly saddened by what he saw, the BBC reported.

“When I see those destroyed buildings, I imagine my family in one of those houses now destroyed and black. I see my granddaughters running in panic,” he said.

“The war is an absurdity in the 21st century – the war is evil and when you see these situations our heart of course stays with the victims, our condolences to their families. But our emotions – there is no way a war can be acceptable in the 21st century. Look at that”

Zelensky: Russia Using Energy to Blackmail Europe
On Wednesday evening, Ukraine’s President Volodymyr Zelensky said Russia’s was using energy to blackmail Europe, and Russia’s decision to cut off gas supplies to Poland and Bulgaria on Wednesday showed “no-one in Europe can hope to maintain any normal economic cooperation with Russia.”

“Russia considers not only gas, but any trade as a weapon. It is just waiting for the moment when one or another trade area can be used,” he said, adding that Russia “sees a united Europe as a target” and “the sooner everyone on the continent agrees that they cannot depend on Russia for trade, the sooner there will be stability.”

The BBC reported that he also welcomed a deal with the EU to suspend duties and quotas on Ukraine’s exports, saying Russia wanted to create chaos in global markets – especially for food.

“Ukrainian exports would help stabilize markets and support the country’s economy during the crisis,” Zelensky noted.