Russia’s Concerning Military Movements Are Only The Beginning 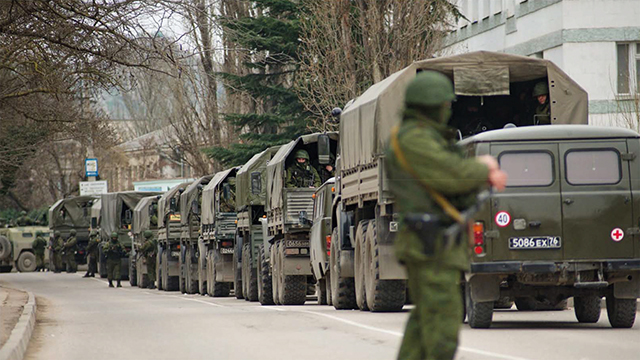 The visible movements in recent days of Russian military hardware have raised concerns. From local community leaders to global leadership, people have been reacting to this aggression with almost universal condemnation. However, it should be noted that it is uncharacteristic of the Kremlin to openly display its intentions in this way, and it should be in the minds of political, defense, and internal security leaders that there is more to this iceberg than meets the eye.

Beneath the waterline there lies a much greater threat that is already active. This threat comes in the form of counter intelligence, sabotage, and aggressive information warfare tactics designed for destabilization and preparation of the battlefield. This tactic is not generally uncommon in warfare, and is taught at virtually all military academies worldwide. It is known cumulatively as “Intelligence Preparation of the Battlefield,” or simply IPB.

The United States Army’s own field manual on the matter, Field Manual 34-130, offers a broad definition as “IPB is a systematic, continuous process of analyzing the threat and environment in a specific geographic area. It is designed to support staff estimates and military decision making.” Simply put, it is a multi-faceted analysis of a coming battle for commanders and their teams to plan and war-game various possible situations.

Russia is currently in this process, some of which offer visible signs, but others are far below the surface. However, they have added more components to the IPB process not a part of the American Army doctrine. These components include the more covert informational subversion and overt probing, harassing, and fixing attacks. While these have been going on since well before 2014, there has been a rise in both of these actions in recent months.

Russian subversion operations in Eastern Ukraine have been working diligently to sway public opinion and erase any remaining Ukrainian identity in the people. Even prior to the invasion in 2014, agents had been pushing propaganda across the country to sway public opinion against the EuroMaidan movement and any pro-Western sentiment, and to slow the advancement of national defense development. In the east, villages and towns were systematically targeted with pro-Russian messaging centered around how remaining in the Russo-centric world best suited their individual and community goals.

The Ukrainian military units that first entered the battlespace were met initially with these “separatist” fighting units that were heavily supported, armed, trained, and often led by Russian special operations elements. These elements had been working for months in the shadows to build popular support for the planned invasion and Russian presence. In addition, as the Ukrainian military scored early victories, weaponry, uniforms, and identification documents found on bodies, and equipment, it clearly confirmed these covert actions.

Now, the Security Service of Ukraine, as well as other internal security elements, have been encountering weapons smugglers, Russian propagandists, and undercover sabotage teams operating in the country. From behind their iron fence, the Kremlin and its puppets in eastern Ukraine have been injecting ideas into the population to solidify their control, even if ground is lost militarily. Many people who used to associate themselves with local ethnicities, such as the Crimean Tatars or those who believe in their Ukrainian heritage, have been forced to accept a new Russian oriented identity. Any opposition is “erased.”

An increase in more openly aggressive actions has also brought more attention to the world’s eye. While the internal movement of military units in Russia towards its 2,295 kilometer border with Ukraine is raising flags on news and social media, the pressure on the Donbas aggression line is heating up. New electronic warfare, artillery, and sensory equipment has been identified as being used.

Small penetration teams have been encountered by Ukrainian soldiers holding the line, and the frequency of salvos of artillery have increased, resulting in the death of 27 Ukrainian service members this year. Compared to a total of 32 in 2020, this is on par to exceed last year’s death toll as a direct result of the increased aggression. This aggression serves multiple purposes for the IPB mission.

Reconnaissance has always been an important component of military planning. While reconnaissance, or simply recon, can be done in a wide variety of ways, the Russian occupation forces have used a renewed “recon-by-fire” approach to determine soft points in the Ukrainian line. Small probing and recon teams have been sent forth, sensing and monitoring but also provoking resistance to estimate Ukrainian unit size and composition. This information is vital to any brigade or assault maneuver.

In addition, usage of drones and electronic surveillance methods have begun providing an image of the battlefield-to-be. These systems have offered a refined picture of the depth of the Ukrainian opposition. Russian occupation commanders are gaining information that will allow follow-on tactics to be used should they break through the first line. Course of Action, or CoA, preparation is another vital point, and is simply defined as the planning for what the enemy will do upon one’s offensive actions.

Assessing the CoA of Ukrainian forces may be somewhat predictable, but the predictability of large global entities is far more difficult. Anticipating a response from NATO, the UK, US, and other relevant entities is something that even the “masterminds” in the Kremlin will be tested to map. Additionally, the Caucasus is in the crosshairs and will not be spared the rising tension, let alone any increase in hostilities.

While Georgia and Ukraine have developed a close bond in this counter-aggression movement against Putin, and with the total objective of reclamation of Soviet Black Sea and Caucasian dominance, Georgia will either be directly or indirectly involved. Tactically or strategically, operations along the ABL and other areas will become tense. But actions that would normally capture headlines will fall to the wayside and go largely unreported in lieu of renewed combat in Ukraine.

While military support is most likely improbable given the size and capabilities of the Georgian Armed Forces, maintaining pressure on another front is important. Drawing resources away from Ukraine will be a key tactic against any attack, just as in Poland, Estonia, Latvia, Lithuania, and even Norway in the far north. Ensuring that the South Caucasus is still a “front” would force the Kremlin to divert attention and, if necessary, alleviate pressure on any defense on the Dnieper River.

Ukraine, with Georgia, needs now more than ever to embrace NATO tighter as Putin hisses and shows his teeth in the Black Sea region. This brotherhood between the two allows for a defensive axis to form, with backing from Turkey and Eastern European nations. Leaders and military commanders from all nations must take note that this IPB is being done for a reason, and the only answer to the threat of this Bear is vigilance and a firm united defense.