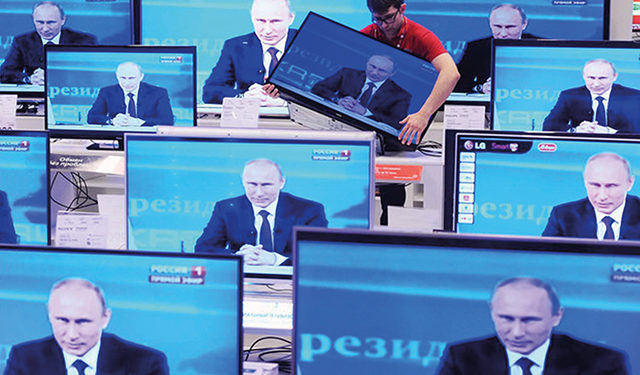 By ‘intelligence’ we mean every sort of information about the enemy and his country – the basis, in short, of our own plans and operations. – Carl von Clausewitz, Prussian general and military theorist, 1780-1831

For those that resist the painful addiction of defense and security studies, strategic foreign information warfare tactics are generally absent from their dinner table conversation topics. However, the presence of Russian information operations in Georgia is exceptionally evident and deserves greater attention. While the vast majority of these tactics go unnoticed by the general public, upon closer observation, it is clear there are subversive connections that are shaping ideals and popular opinion.

Understanding Information Operations (IO) is no longer something in which only intelligence and special operations forces are exclusively schooled. Something lacking from much of the public education and awareness campaigns is a basic understanding of what enemies of the state are capable of when they have the resources necessary to infiltrate various media and information outlets. Russia has grown to master this, taking lessons from their Soviet predecessors and simply modernizing them with new technology. These tactics span a spectrum of different methods to shape the socio-political environment in a given country, such as Georgia.

IO encompasses a broad selection of topics that the Kremlin uses against its enemies and occupied territories. The primary part of this action is the interruption of military decision-making funnels, and the ability to support offensive military operations with popular support propaganda. This workflow is often known as the “OODA” loop, and is the cycle of observe, orient, decide, and act series of actions taken in military planning operations. Interruption of this flow can stall, and ultimately cause a long-lasting atrophy of the targeted military command and control structure.

With this stall of command ability, the influence of the general public to oppose their nation’s resistance to Russian military aggression only compliments this tactic. This includes the continual normalization of Russian military occupation and incursion. It takes such forms from children’s cartoons and comedy, to more overt news coverage and political interactions. While these attempts at public influence are subtle, they are vast and measured only by the Western attempts to secure Georgia in their sphere of security and stability.

Russia’s IO capabilities were visible in the August War, but were especially more so in their invasion of Ukraine. This invasion, being conducted in a far subtler way than that in Georgia after seeing their forces cut down due to ineptitude, was evident. The infamous “Little Green Men” that were marched into the occupied portions of the nation, as well as the subsequent media campaign, made Russia out to be a non-combatant despite being clearly engaged in combat with Ukrainian forces.

Manipulation of the data that is fed to the targeted populace primes the region for military intervention. So much of this is veiled by innocent attempts at luring the populace to be comfortable with interacting with the front organizations Russian intelligence use to engage their targets. From simple Facebook posts to direct email campaigns, some of these reach people at an individual level and attempt to ensnare them in an endless loop of stimulation. With this attained, they are able to more easily slide in their propaganda. Through “news” and advertisements, the targeted people can become docile and less apprehensive to their more aggressive influence.

Religion has been an avenue of this front, as proposing an “us or them” situation against European or American Catholicism or Protestantism compared to the “only true” Russo-Georgian Orthodox allegiance. This has recently proven to be a considerable point of contention, and also a means with which to pry nations away from Western alleged “decadence” and “perversion.” Even the recent division between pro-church organizations and Pride supporters has opened an opportunity for Kremlin operatives to exploit separations in public allegiances.

This weaponization of information is a significant portion of the Kremlin’s power projection. However, since their Soviet operational environment collapsed, they have been forced to expeditiously renovate their avenues of reach to vulnerable populations that they find ripe for the culling. So many of the residents of South Ossetia and Abkhazia, now almost a generation into their occupation, have been brought up believing that Russia is their savior. Despite the destruction of their infrastructure, healthcare, and social fabric, they have been convinced that it’s better than Tbilisi and Western influence.

The perversion of trust and allegiances lies at the heart of these tactics to split nations and reclaim the former soviet territory Putin so desires. This Janus approach of both overt and covert endeavors to remove suspicion of their operations has largely been successful. Convenient diversion tactics and puppeteering have allowed the Russian government to control the narrative around their shadowy and illegal operations, not just in Georgia and Ukraine, but the world over.

Additionally, the normalization of this allows the continuation of these operations to maintain control of the populace. Even the questioning of “Russian meddling” has become parallel to the proverbial child’s worry of a monster under the bed- something to be dismissed and labeled absurd to its face. However, the intervention of Russian intelligence and counterintelligence elements, not only in Georgia but also in the West as a whole, is a real horror to behold, only rivaled by China.

Like the Chinese legendary Forbidden City’s exclusion, Russia has created a bubble of control, a haven of twisted information, and crafted their own truth, even on occasion labeling the internet itself as a CIA pet project. Despite the absurdity of such a claim, the Kremlin has invested significant resources into promulgating this and other lies. Entire departments within the myriad of government organizations related to intelligence, state security, and foreign relations have been cultivated to push propaganda.

While the former might of the Russian Empire or the Soviet Socialist Republic is a far cry from what the crippled Russian Federation is now, their asymmetric IO campaign remains a continual threat. Georgia, among other nations, remains in the crosshairs of Putin’s scope. Brushing off his advances is exactly what he and his ilk are attempting to elicit from not only local national but also foreign officials. It’s not only national defense and intelligence groups that need to be informed of this threat, but also the general public.

Georgia consists of a wide variety of social groups, as any backpacker or keen-eyed tourist will attest to. However, maintaining unity through not only strength of arms but also extensive counter-IO measures are imperative. IO has become the preferred method of warfare, as NATO warms up to Georgia, and Russia is not about to reduce its subversive offensive. Georgia, with support from its allies, needs to ensure that they are willing to counter with able and willing elements, dedicated to the preservation and security of the nation.