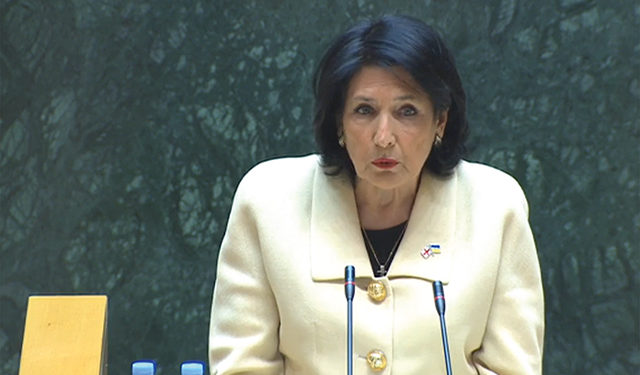 While Georgian political events this week have largely been focused on the ongoing war, it also came time for President of Georgia Salome Zurabishvili to deliver her annual report to Parliament.

On March 14, she entered the session hall together with the temporary representative of Ukraine. Her annual speech began with a minute of silence and the Ukrainian national anthem.

The President noted that the selfless struggle against Russian aggression “only leads to respect, solidarity and support,” and added that Georgia stood and stands by Ukraine and Ukrainians.
Zurabishvili addressed the President of Ukraine, Volodymyr Zelensky on the issue of his country’s Ambassador, withdrawn from Georgia two weeks ago “for consultations.”

“In my parliamentary speech, I appeal to the Georgian government to return our Ambassador to Ukraine, and, today, from this tribune, I address my colleague and friend, the President of Ukraine, Volodymyr Zelensky, and ask him to return the Ambassador so that the connection between the two nations in these difficult times, can be fully strengthened and brought closer and made more unwavering.”

The President also expressed dissatisfaction with the government and noted she had been refused the chance to visit Paris, Brussels, Berlin, and Warsaw, instead having to use personal contacts and to carry out “unofficial” visits.

“The restrictions imposed on the President’s international activities are incomprehensible when the need is greatest and time is running out. On February 26, I was refused in writing to pay working visits to Paris, Brussels, Berlin and Warsaw. Despite the current situation, I had to cancel all official formats and found it necessary to use my personal contacts and turn working visits into personal meetings. I think this approach and such restrictions are harmful to our country, it being in such a difficult region,” Zurabishvili said.

She went on to highlight her 40 years of experience in diplomacy and strategic affairs, and noted that the personal contacts she has acquired during this period should be used to the maximum rather than lost.

Irakli Kobakhidze, Chairman of the Georgian Dream, responded to Zurabishvili’s statement by saying that if the Georgian president had truly visited Europe in such a way, it meant she had violated the country’s constitution and, as such, the Georgian government would be appealing to the Constitutional Court against her.

The subsequent statement released by the Georgian Dream Political Council reads that in the process of implementing Georgia’s foreign policy, the President had violated the Constitution, a fact needing to be confirmed by the Constitutional Court.

“[Further] The appointment of ambassadors and other diplomatic representatives is one of the most important tools for foreign policy implementation. The relevant act is issued with the co-signature of the President and the Prime Minister, and, according to the Constitution, political responsibility for such an act lies solely with the Government. This means that the material authority to appoint an ambassador is vested in the Government by the Constitution, while the president has only legal and ceremonial powers in this area.

In contradiction to the reaction of the ruling party, ex-PM Giorgi Gakharia thanked President Salome Zurabishvili for the sentiment expressed in her annual address.

“I am grateful to the President of Georgia, Salome Zurabishvili, for her leadership during this difficult period for Georgia and its future. I am grateful for her showing the will of the citizens of Georgia and for the restoration of national self-esteem,” Gakharia wrote on Twitter.