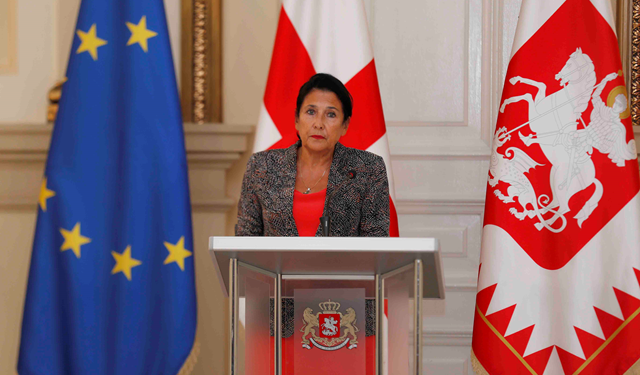 “The refusal to accept an EU loan is a very incomprehensible step for a large part of the population and personally for me,” President of Georgia Salome Zurabishvili said at a special briefing.

The first person of the country responded to the position of the Georgian government regarding the refusal to receive financial assistance from the European Union, noting that “it is unclear what causes the reduction of international debt to more important than the crisis situation of citizens.”

“Exactly one month is left until the local elections! Elections, which has a special significance for our country and our European path. We must be able to hold exemplary elections without hate speech, violence and insults, in a democratic, competitive and fair environment! This is what our citizens are waiting for and our partners will observe it! We have overcome so many political and economic difficulties, however, without the help, solidarity, support and hard work of our partners it would have been very difficult to endure and overcome the economic crisis caused by the pandemic and the internal political confrontation.

“We also understand that the weakening of European support and interest in our country and region, for any reason, is in the interests of internal and external forces that are trying to destabilize and weaken our country.

“Given these circumstances, the refusal to accept an EU loan is a rather incomprehensible step for a large part of the population and for me personally.

“The economic argument, the need to reduce the debt, is not a proper argument! No matter how much our economy grows, even if it is double-digit, it still does not annul out the social and human damage that COVID brought to our population, and the reduction of which was directly linked with the 75 million euro (or 300 million GEL) loan. It is unclear what causes the reduction of international debt more important than the crisis situation of our citizens. Until the result of the double-digit growth is reflected in the welfare of the community, the logic of refusing help is hard to understand!

“It sounds paradoxical to refuse a loan from Europe on the one hand, but to benefit from various projects, including the construction of the Rikoti Highway on the other hand, which is largely being carried out with loans from Europe!

“The economic consequences of this step are not limited to the refusal of this loan only. The main thing here is the reputation of our country, the credibility of our word! It is true that the government has the right to refuse any loan, but the changing attitude towards the documents signed along with the loan and the unilateral unexplained decisions may affect the future rating of the country, as well as the mood of foreign investors.

“I am convinced that the economic isolationism, which is unattainable even for the rich countries of the world today, and is a dangerous illusion for us as a small country, is not the basis of these decisions, but we need to be careful so that such steps do not inspire false perceptions.

“There is no alternative to EU solidarity and partnership, which 80% of the population does not even understand, but even shares. We must also understand that in the post-Afghanistan period, a new strategic situation is emerging where our stability and security will depend more on Europe than before.

“When we promise our citizens “More Europe in Georgia and more Georgia in Europe” and when we tell our European partners that we want to apply in 2024, it is necessary to maintain the full trust and support of our partners on this path!

The President also responded to the signing of the April 19 agreement by the United National Movement, saying:

“My role is very clear in this situation: I stand and will stand on the side of Georgia’s European choice. I will do my best to ensure that no one, neither the government with its unreasonable steps nor the destructive opposition, which today brazenly signed the document that it had been undermining for 6 months, harms the European path of the country and jeopardizes the strategic interests of our country. One of them has the responsibility to conduct elections fairly, to fulfill its obligations, and to build trust in the country and the other one should not be allowed to provoke destabilization by questioning the legitimacy of the elections for no reason.

“My position remains unchanged: I am committed to everything I have always defended from day one: social unity, depolarization, unification of the country, political democracy and a European future,” the president said.

Georgia failed to sufficiently address the conditions for the macro-financial assistance, and, notably, to increase the independence, accountability and quality of the judicial system, – EU Charge d’Affaires ad interim, Julien Crampes, said at a briefing held at the EU Delegation Office, following on from Prime Minister Irakli Garibashvili’s announcement that the Georgian government would not be taking the second tranche of EU support.