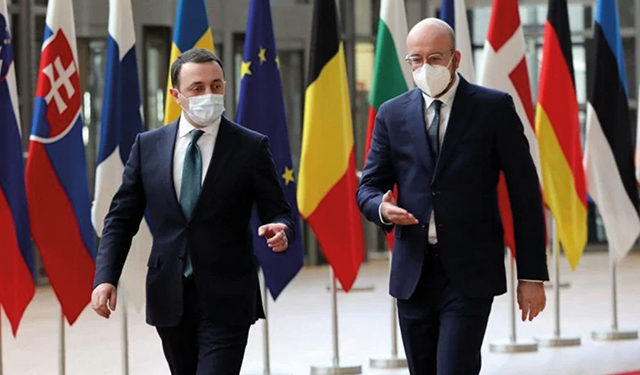 Georgia failed to sufficiently address the conditions for the macro-financial assistance, and, notably, to increase the independence, accountability and quality of the judicial system, – EU Charge d’Affaires ad interim, Julien Crampes, said at a briefing held at the EU Delegation Office, following on from Prime Minister Irakli Garibashvili’s announcement that the Georgian government would not be taking the second tranche of EU support.

However, he added, Georgia had in any case failed to sufficiently address the conditions for the macro-financial assistance.

“This amount was due to be disbursed before 30 September 2021, should Georgia have been in compliance with the mutually agreed commitments taken on by its government in September 2020 when signing the conditions for this assistance program. The macro-financial assistance, EUR 150 million in total, out of which half has already been disbursed, was aimed at helping Georgia and its citizens address the challenges of the COVID-19 pandemic. These funds were intended to be available for the benefit of the Georgian people.

“The European Union takes note of the reasoning provided by the Georgian Government on their decision not to ask for the rest of the EU micro-financial assistance. While we respect the decision of the Georgian authorities, at the same time, we note that Georgia failed to sufficiently address the condition for this macro-financial assistance, and notably, to increase the independence, accountability and quality of the judicial system.

“In particular, the selection for Supreme Court judges proceeded in the absence of the legislative changes needed to ensure full compliance with all recommendations made by the Venice Commission. The process also failed to guarantee the equal treatment of all candidates. Several further legal changes aimed at increasing the transparency of the court system have not been adopted.

“The justice-related conditions of the macro-financial assistance were also commitments taken on by Georgian political parties when signing the 19 April 2021 Agreement, mediated by the European Union,” Crampes added.

On Tuesday, PM Garibashvili announced that the government would refrain from taking the second part of the EU loan.

“In order to avoid any insinuation, we have decided to refrain from taking the second part of the EU loan,” he stated.

Garibashvili explained that the reason for the above decision was, on the one hand, “high economic growth in Georgia” and, on the other hand, the desire to reduce foreign debt.

Irakli Kobakhidze, Chairman of the Georgian Dream, told PalitraNews that receiving macro-financial assistance from the EU is “no longer a financial necessity,” as the economic growth has accumulated an additional 1 billion GEL in the budget.

Since 2008, the EU has conducted four macro-financial assistance operations in Georgia.

Based on the decision of May 26, 2020, the European Union provided macro-financial assistance to Georgia to the amount of 150 million Euros.

The amount was divided into two equal tranches – the first tranche of EUR 75 million was conditional on the fulfillment of obligations under the International Monetary Fund (IMF), and this amount was received by Georgia at the end of last year. The transfer of the second EUR 75 million would depend on the positive assessment of the European Commission of seven preconditions Georgia took on the responsibility to fulfill. Among them, the main one concerned the reform of the justice system.

She noted, though, that the European Union does stand with the Georgian people.

“Unfortunately, the Georgian government didn’t fulfill the conditions listed in the MoU for the second tranche (€75mill): judicial reform, etc. You can’t decline what you were not eligible for. We stand with the people of Georgia,” the MEP wrote.

PM Garibashvili responded quickly. “The European Parliament is not our boss: our boss is the Georgian people. If they [EU] are really interested in the situation, they should find out the details and not make superficial statements,” he said, reiterating that the country had decided not to take the 75 million Euros in aid because it was a loan that Georgia “does not need at this stage.”

“I will remind the people that this is a loan, part of which we took in 2020. 75 million Euros was the second part of the loan, which was not a grant or assistance [and so would need to be paid back],” the PM told reporters on August 31.

“This year, since we started reducing our foreign debt, in all probability, it will no longer be necessary to receive this amount. We are grateful for all the help the EU has given us during the pandemic, and in general for everything they are doing for us. We will continue to move in this direction,” the PM said, noting that further details will be given by the Ministry of Finance later.