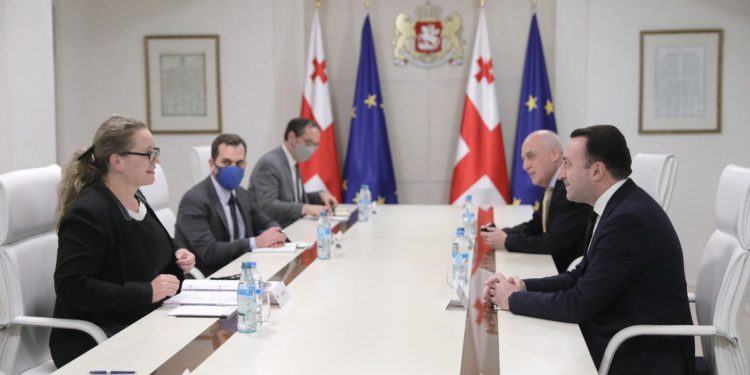 The Prime Minister of Georgia, Irakli Garibashvili, met with US Deputy Assistant Secretary of State Erika Olson, after which he stated that in the current geopolitical environment, a strong partnership between Georgia and the United States is even more important for the common interests and Euro-Atlantic security.

Gharibashvili underlined the unwavering, bipartisan support of the United States for Georgia, as a result of which the country has made significant progress in a number of areas that are firmly on the path to European and Euro-Atlantic integration. The meeting focused on the security environment and challenges in the Black Sea and South Caucasus region.

Irakli Garibashvili noted that Georgia remains a loyal and reliable ally of the United States in the region. Attention was paid to the situation in the occupied territories of Georgia and the threats posed by the occupation, as well as to the humanitarian problems that citizens living on both sides of the occupation line face on a daily basis.

During the meeting importance of ensuring peace and stability in the region was especially emphasized. In this context, a new peace format was mentioned – the Neighborhood Peace Initiative, by which the Prime Minister of Georgia addressed the UN and the importance of the involvement of the United States and European partners in this process.

The US side also stressed Georgia’s significant contribution to the evacuation effort from Afghanistan. During the meeting, they talked about Georgia’s European and Euro-Atlantic integration process and the reforms implemented on this path.

The meeting at the Government Administration was attended by US Ambassador to Georgia Kelly Degnan and Deputy Prime Minister and Minister of Foreign Affairs of Georgia David Zalkaliani.