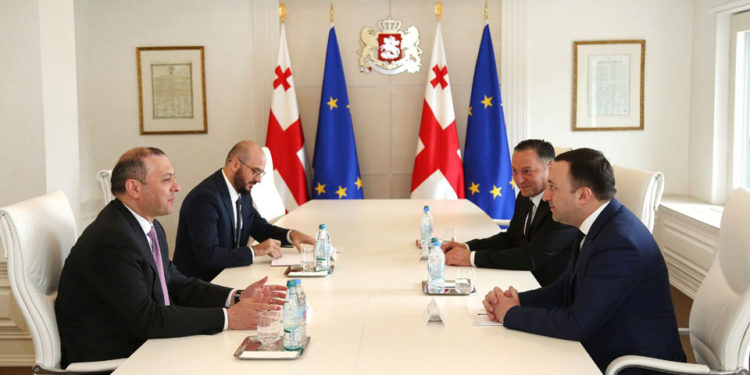 Today, on May 4, Georgian Prime Irakli Garibashvili held a meeting with Armen Grigoryan, Secretary of the Security Council of the Republic of Armenia.

The parties discussed the good neighborly relations between Georgia and Armenia, along with directions for future cooperation.

Garibashvili thanked Armen Grigoryan for his visit and emphasized the importance of ensuring peace and stability in the region.

It was underlined that, in order to further bilateral relations, Georgia remains committed to contributing to regional dialogue for fostering economy, trade, culture, and other directions. The conversation also touched on the Prime Minister’s peaceful neighborhood initiative.

The parties also discussed the ongoing military action in Ukraine. Georgia stands by Ukraine, supporting it politically and in every international format, the Prime Minister added. Special attention was paid the country’s humanitarian aid for the Ukrainian people.

The meeting underlined 2022 as a special year for the friendly ties between Georgia and Armenia, in that it marks the 30th anniversary of the diplomatic relations between the two countries.