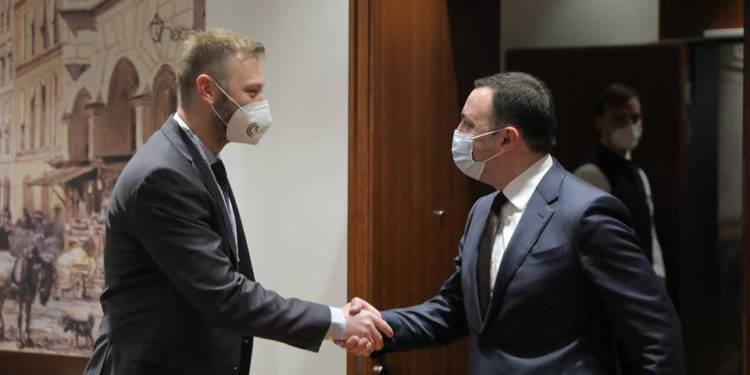 Garibashvili highlighted a close political relationship with Slovakia, thereby noting that cooperation between research institutions and think-tanks, as well as businesses of both countries, has tremendous importance.

Primer Minister confirmed the readiness of the Georgian side towards deepening further cooperation with Slovakia on the grounds of common European values.

Firm support of the Republic of Slovakia towards the territorial integrity and sovereignty of Georgia, as well as towards European and Euro-Atlantic integration, was highlighted at the meeting.

The Prime Minister of Georgia spoke about the active cooperation with GLOBSEC and confirmed readiness to further deepen the relations. Irakli Garibashvili noted that the Government of Georgia welcomes a continued partnership with GLOBSEC within such conferences as the European Way of Georgia and NATO-Georgia Public Diplomacy Forum.

The process of European and Euro-Atlantic integration was also referred to at the meeting, along with the progress achieved towards this end.

GLOBSEC is a think-tank based in Bratislava, which is focused on boosting the security and sustainability in Europe, including the new ideas and solutions that are offered to the world towards this end. Róbert Vass created the Bratislava Forum of GLOBSEC several years ago, which is ranked within the Top 5 Conferences of the Planet along with the World Economic Forum and Munich Security Conference. Forum usually hosts over 1300 delegates, including the Heads of States and Governments, high-ranking politicians, chief executives of largest corporations, decision-makers from non-government organizations and think-tanks, and leaders of various other fields.