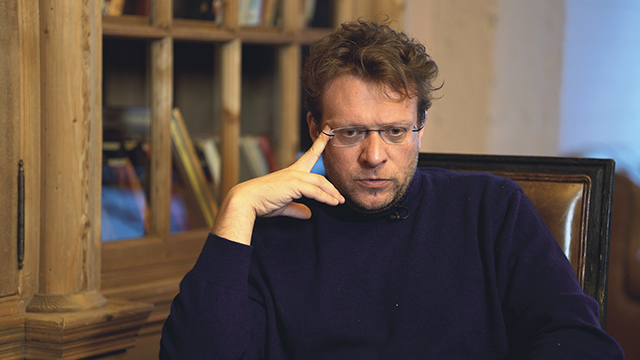 Radio Free Europe spoke to one of the most prominent Russian disinformation scholars in the West, Peter Pomerancev, on Russia’s colonialist mindset and how it affects their decision making.

Do you consider Russia a colonial state?
Yes, but I’ve just been at this fascinating session where I was told that there’s a difference between colonialist and imperialist. So I don’t know if it’s colonialist or imperialist, but it clearly believes it has a right to crush everybody around it.

How long do you think it has been like that?
I’m not a specialist on Russian imperial history. But I assume almost from the start, I mean, it’s immediately born of this idea of its own grandeur, the third Rome; that it has a mission. That implies an imperial progress. I think it’s always been there, it’s quite inbuilt. I don’t think there’s been a moment where it was a normal nation state. It’s always doing expansion and grandeur and messianic mission.

Imperialist, or colonialists, how much longer can it remain like that, especially in light of recent events?
I can’t put a timeframe on it. But it doesn’t end with Ukraine and Georgia. There’s internal colonialism towards ethnic minorities. And then in an even deeper way, maybe there’s a sort of internal colonialism within those who have power, whether it’s oligarchs, or the KGB; they see the state and its population as something to extract from and make themselves powerful with. They don’t see themselves in some sort of economic unity with the rest of the country: There’s the Kholopi, and slaves who work for them. I guess it’ll last as long as there’s Russia.

The West talks about the utmost importance of Putin being dealt a strategic defeat. What kind of strategic defeat can we talk about if he ends up with more territory than he had?
The way I’ve understood it, and maybe there’s a lack of clarity, is that we can’t let Putin set an example for China and anybody else who might want to do the same thing. Who, in this day and age, measures success by territory? I mean, European colonial powers gave up on their empires partly because they were unprofitable. So it’s a pretty perverse type of measurement. But maybe it’s one that’s attractive to China. I don’t know.

It clearly works with Russia.
Yes. For the Russians, it works. There are a lot of things they can be happy about at the same time. But you’re right. There is a popular rhetoric in Russia about “nashi zemly,” an obsession with territory. Definitely territory and size, as a compensation for failure and everything else. So we failed everything. We failed as a science superpower, as an economic superpower. We’ve blown our chances as an energy superpower, which was incredibly self-destructive, but “at least we’re the biggest.”

Russia seems to hope that winter will come and Europeans will freeze and they’ll give up on supporting Ukraine in favor of not having to wear an extra thick woolen jacket. They obviously believe that Europeans are fickle.
I think when we say “Europeans,” we are talking about one country, Germany, because they decide everything. Russia is doing everything so badly – I mean, I don’t know how you manage to lose Germany when Germany is socially, politically, leadership-wise, business-wise, so aligned with Russia. I’m not counting my chickens, but, you know, Scholz is going around nationalizing oil companies. I mean, the Germans are very weird. They clearly love doing deals with the devil. And they moralize it, which is the most surreal thing I’ve ever seen.

Morally justified mercantilism?
Yeah. But there’s something really rotten in German political culture. Something quite sadistic. But if you offend them in a certain way, and you get to their pride, they can find backbone very fast. Right now, they seem intent on making Germany and Europe energy independent. That seems to be the policy. If they manage to do that faster than we thought, respect, hats off to that. That’s pretty amazing. We thought it would take two years. They seem to want to do it in one.

That matters a huge amount to Ukraine.
Yes, it would be huge. Despite the slowness on the weapons fronts, if they can forge true energy security, which is what this is about, then that’s pretty impressive.

Let’s discuss this nuclear blackmail that Putin is peddling. How much of an impact is it going to have on decision-making both in Kyiv and further westward?
The Ukrainians are full of resolve. They’ve already factored a nuclear attack in. They say this is going to be less than Mariupol. That they don’t care. But if he does a Hiroshima on Vinytsa and says Kyiv is next, then I don’t know. If he does that, so much changes. The wind will blow to Europe; radioactive particles will land in Europe. We can pretty much safely assume how the Baltics and the Poles will react to that. Then he’s played his last card, doesn’t really have anything left. So I don’t know.

It’s actually a card he can play repeatedly, a kind of “recharging Joker.” I know it’s not a nice talk we’re having here. But that’s how it is.
We don’t know what the reaction from the West would be if he did that. I’d like to hear from the West, and from others, that the costs would be so high for Russia, that it would not be worth doing. I mean, this is just about signaling.

I’ve seen many opinion makers say that this is existential for Putin. When you say the West needs to make clear the cost will be high, how much higher can it be than losing to Ukraine and then losing his own power?
It could be something like destroying the Black Sea Fleet. Taking out all the nuclear bases and centers inside of Russia, so he doesn’t have that capability anymore. That’s the main thing we’re saying. Many, many, many things on our laundry list of what he cares about, and what he thinks is important. I assume that you do it in such a way that he can’t do it a second time.

I think the closer he gets to nuclear, the weaker he is. I think we’ve completely misinterpreted this. I think this is the only card he’s got left. And you never play your last card. You only use it as a threat, and if he plays it, that’s going to be it for him anyway. He’s the one in a bad situation, not us; his choices are terrible. We have lots of choices. We have lots of ways forward yet.