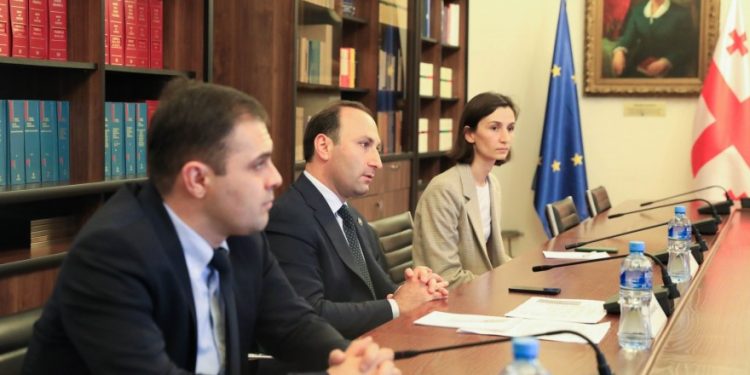 The Counsellor of the EU Delegation to Georgia, Julien Crampes, and the US Embassy political officers Lana Owens and Evan Elliott, held a meeting with the Chair of the Political Group Citizens, Alexander Elisashvili, Chair of the PG Lelo – Partnership for Georgia, David Usupashvili; Chair of the Faction United National Movement – Unified Opposition Unity Makes Strength, Khatia Dekanoidze, and MP Mikheil Daushvili to discuss the fulfillment of the 12-point recommendations set out by the EU.

“We overviewed the course of the fulfillment of 12 tasks the EU set out for Georgia for the reception of the so desired EU candidate status. We informed the guests about the intensive works in the working groups, the engagement of the opposition in this process and attached particular attention to the judicial reform. We revealed to the diplomats that we are the only party submitting an alternative vision to that of the Georgian Dream about the judicial reform, and stressed its importance,” Elisashvili stated.

Usupashvili stated, “speaking about the EU candidate status, the officers of the embassies expressed their commitment to aiding us in this direction. They asked about the de-polarization processes. I introduced the position of Lelo, our intention to actively participate in the Committee and plenary sessions but as to the preparatory stage, working groups, etc. the positions shall be reconciled through an open process at the Committee sittings, where we shall submit our positions.”

“The 12 points put forth by the European Commission (EC) include de-oligarchization. Similar proposals were made for Moldova and Ukraine,” he said. “The European Commission gave Ukraine the instruction to actually put the de-oligarchization law into practice. This indicates that the EC views the passing of the law favorably, and that the law now needs to be put into effect. We require an objective benchmark by which we can determine whether the de-oligarchization requirement is achieved. We will use the EC’s position on Ukraine as an objective benchmark and, in line with it, adopt the model that the EC demanded be put into practice. We want to prevent disputes about the document’s content, as there is a considerable likelihood that this provision won’t be deemed satisfied in such a situation because the interpretations will be open-ended. Even if Ukrainian law is not perfect, we have from it established requirements for the implementation of particular issues,” Okhanashvili remarked, adding, “the working group intended to modify this statute to Georgian conformance in order to eliminate any suppositions.

The process will begin with us drafting the law before moving to the political arena, the committee, and the plenary sessions. At the same time, perhaps by this point, the Venice Commission will reach a resolution regarding the Ukrainian model.”

Anri Okhanashvili, the Chairman of the Committee and the head of the Working Group, stated that the meeting helped identify a number of issues that will be further elaborated upon by the Group, including the creation of an independent anti-corruption agency in accordance with the proposal, a prevention-oriented anti-corruption direction, rapid response in case of corruption detection, and where necessary, revision of specific criminal law compositions and sanctions as well as the creation of an independent anti-corruption agency as per the proposal of the representative of the civil society.

“Each participant had the opportunity to address the topics of their choosing. From our perspective, we brought up concerns about the need to improve agency collaboration and the effort put forth to avoid corruption. We invited the representatives of the various agencies to submit suggestions regarding the danger zones and work-related obstacles in each direction. Our goal is to further strengthen criminal justice policy where necessary in addition to prevention. The civil society representative brought up the need for a distinct anti-corruption agency. The Group will discuss the aforementioned topics in its upcoming meeting, which will take place soon. It is important to emphasize that Georgia has achieved significant strides in the fight against corruption. Georgia ranks first in Eastern Europe and 45th out of 145 states according to the Corruption Perception Index, indicating that the battle against corruption is a top priority for our nation. Several efforts have been taken in this direction, and we are still working to strengthen institutions even more,” Okhanashvili remarked.

The Working Group is composed of: members of the faction Georgian Dream and individual opposition groups, as well as representatives of the government administration, the prosecutor’s office, the State Security Service, the Ministry of Justice, the State Audit Service, and civil society (EaP CSF Georgian National Platform.)

Human Rights and Civil Integration Committee to Initiate Legal Package Related to 11th Point of EC Recommendations
“The public is aware that the Parliament of Georgia continues intensive work on the implementation of the recommendations set out by the European Council,” Chair of the Human Rights Protection and Civil Integration Committee, Mikheil Sarjveladze, stated at a briefing this week.

“Following adoption of these amendments, the legislation of our country will further encourage the use of the jurisprudence of the European Court of Human Rights by national courts, which, in turn, will contribute to the more active implementation of the standards of the protection of human rights in the country, which are the best European standards.

“Specific spaces will be set up in all procedural legislation in order to ensure more active use of the practice of the ECHR by courts, lawyers, prosecutors, and administrative bodies in justifying their positions. At the same time, specific obligations will be created for legal professionals to improve their qualifications in terms of the case law of the ECHR.

“Another block of issues regulated in a novel manner will concern increasing the accessibility of the decisions of the ECHR, which will be manifested in their translation, analytics, and the provision of information to the public and professional circles. The legal status of the decisions of the European Court of Human Rights, as official interpretations of the Convention, will be defined in a new way,” he stated.
Sarjveladze concluded that the Committee will further cooperate with all parties concerned and the Working Group is to develop the recommendations in view to monitor the practical enforcement of the legal changes.

Okhanashvili Meets with Acting Head of EU Delegation to Georgia, Discusses Process of Implementing EC’s 12-Points
The Chairman of the Legal Issues Committee, Anri Okhanashvili, met with the Acting Head of the EU Delegation to Georgia, Julien Crampes, to discuss the process of implementing the EC’s 12-point plan and the activities of the working groups at the Legal Issues Committee.

“I had a lengthy conversation with the EU representative regarding the structure, objectives, and directions of the working groups, as well as how to make the process as open and inclusive as possible. I also outlined the conditions of this process and our goal for the aforementioned concerns. We had a discussion and agreed that, in general, they are fully aware of the working groups’ activities and the status of the process. Naturally, it is crucial that the EU office in Georgia is properly informed on the 12-point plan’s implementation process, which ultimately aims to further Georgia’s integration into the EU,” Okhanashvili stated after the meeting.