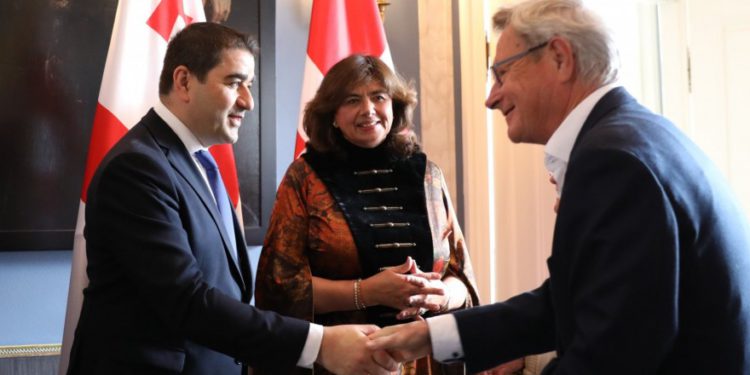 The Speaker of the Parliament, Shalva Papuashvili attended the Reception dedicated to the 30th Anniversary of the Diplomatic Relations with the Kingdom of Denmark and delivered a speech dwelling on the Georgia-Denmark bilateral relations.

In this context, the Speaker underlined the importance of the support of the friend countries on the EU integration path of Georgia.

“Georgia is a capable and reliable partner to the NATO and the EU, being a devoted ally within and beyond the region. Georgia and Denmark share the common values and interests in maintaining the international order based on peace, democracy and law,” he stated.

As he underlined, as Georgia is expecting the decision of the EU on granting the EU candidate status to Georgia, the support of the Kingdom of Denmark is of utmost importance.

The Ambassador of Georgia to Denmark, Nata Menabde also addressed the attendees.

The Reception, attended by the representatives of the diplomatic corps, executive authorities and the Georgian Diaspora, was organized by the Embassy of Georgia to Denmark.

The Delegation accompanying the Speaker on his official visit to the Nordic countries is composed of MPs: Nikoloz Samkharadze, Maka Botchorishvili, Maia Bitadze and Hermann Szabo.