Painful but Inevitable Changes in the South Caucasus 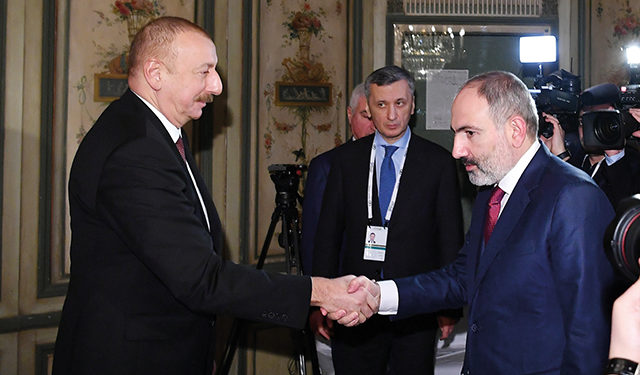 President Ilham Aliyev of Azerbaijan and Prime Minister Nikol Pashinyan of Armenia greet each other before one on one meeting in Munich, Germany, February 2020. Source: President.Az

While all the attention is on Russia’s invasion of Ukraine, the South Caucasus is experiencing long term geopolitical changes.

I have already talked about the impact of the invasion on the region and how each country is approaching the dilemma of balancing between Russia and Ukraine, and, at the same time, West and Russia.

But perhaps a more critical change in the region is the emerging rapprochement between Armenia and Azerbaijan. The Second Nagorno-Karabakh War has irreversibly tilted the geopolitical balance in Baku’s favor. Armenia, though it managed to retain control over a truncated part of Nagorno-Karabakh, has gone through a difficult realization of the need to end its historic geopolitical isolation by improving relations with its neighbors to the west and east, Turkey and Azerbaijan respectively.

But this would require signing a definitive peace agreement with Azerbaijan, which would involve a major border demarcation effort, possible restoration of railway connections, and most of all recognition of each other’s territorial integrity. The latter point has been a particularly sore point in Armenia-Azerbaijani historically antagonistic relations. Yerevan has so far refused to recognize its eastern neighbor’s sovereignty over Nagorno-Karabakh.

This, however, could change, as, over the past several months, the Armenian leadership has been quite positive about reaching an overarching peace agreement with Baku and recognizing the troubled Nagorno-Karabakh as a part of Azerbaijan. At least, Yerevan has not officially denied it would be following this path. It is likely that Armenia will demand autonomy, which would include special cultural rights for the Armenian population. It is impossible to say with certainty how the negotiations would unfold, but a range of cultural rights guaranteeing the use of the Armenian language is a likely solution.

The anticipation of the agreement has been also seen in the unfolding internal Armenian political situation. The opposition to Prime Minister Nikol Pashinyan has concentrated its remaining energies to oust him by staging continuous demonstrations in central Yerevan.

Here, too many unknowns complicate to predict how the internal situation will impact the negotiations with Azerbaijan. Yet, the indications at hand show that the opposition is unlikely to succeed. Like the neighboring Georgia, the opposition in Armenia, in many ways, is not sufficiently attractive.

Pashinyan is also likely to survive because of the growing discrepancy in expectations and motivations between the public in Armenia and the powerful Armenian diaspora abroad.

Yet another unknown in the unfolding geopolitical revolution in the South Caucasus is the emerging rapprochement between Armenia and Turkey. In many ways, a potential peace deal with Azerbaijan will depend on how Yerevan’s ties with Ankara progress. Earlier examples show that achieving reconciliation with Turkey cannot go independently from the developments in relations with Azerbaijan.

Thus, Armenia is revolutionizing its foreign policy. The time is propitious for bold moves. The opposition inside the country is weakened, while the momentum to sign an overarching peace agreement with Azerbaijan and reach a rapprochement with Turkey is growing.

There are also immense economic benefits for Armenia to be reaped from the opening. Goods could reach the European market, while trade with Turkey could turn Armenia into a transit country. A peace deal with Azerbaijan would potentially guarantee the revival of the stalled railway project to Russia.

What remains to be seen is Russia’s position. Being Armenia’s security guarantor, much hinges upon Moscow’s willingness to facilitate the improvement of ties between Armenian and Azerbaijan and Armenia and Turkey. It is still unclear how Russia benefits from Armenia’s moves. After all, Moscow’s ability to tightly control Armenia’s foreign policy has been based on the latter’s geopolitical isolation.

Therefore, Armenia’s opening would change many facets of this arrangement.

But viewing this diplomatic process as if orchestrated by Moscow might not be the right way to explain the developments. Russia might be resigned to accepting changes in the South Caucasus. This is no longer an era of exclusive control over the region, and the Kremlin is well aware it cannot exert enough influence to singlehandedly dominate Armenia, Azerbaijan, and Georgia. Moscow might simply be unable to prevent the emergence of other major actors from penetrating the region. And Turkey is one of those players.