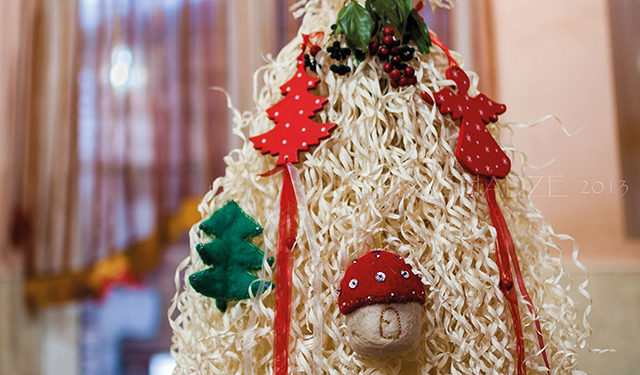 A traditional Georgian "chichilaki" tree. Georgians believe that it resembles the famous beard of St. Basil the Great, who is thought to visit people during Christmas. It is also a symbol of hope. Every year, people buy chichilakis and decorate them with small fruits and berries. The chichilakis are then ceremoniously burned the day before the Georgian Orthodox Epiphany on 19 January to symbolize the passing of the previous year's troubles. Photo by Irma Laghadze

Christmas is very near, coming up in just a couple of days, but we will not be celebrating it here in Georgia. We have our own Christmas Day, and it has nothing to do with the Christmas celebrated by most of the Christians of the world: ours is a fortnight later because we are different, so to speak, and we feel separated from the rest of the world in this respect. The 25th of December is going to be a regular Saturday – some of us relaxing and some working away, depending on our occupation and our place in society. Nothing special will be happening on the 25th because we will be saving our rejoicing energy, fun-having mood and partying capacity for New Year and then the 7th of January, which the majority of Georgia’s population sincerely believes is the real Christmas, gifted to them by the Lord and the indigenous religious tradition. Of course, there are some people in this country, like Catholics and Protestants, who will not lag behind the rest of the world in their Christmas celebrations, and will elatedly hail the birth of the most popular saint and prophet in history, Jesus Christ, on December 25th. So, I always tell them Merry Christmas before I join my Orthodox brothers and sisters in wishing the same to one another.

The New Year is a little different, as, in this, Georgia will celebrate the Day of onset of the next year together with all other inhabitants on the planet. And it feels so good! But incidentally, we also have our own New Year, which is toasted to on the 14th of January, and we call it the Old New Year. This might seem a little strange, but this is what we do here – see the New Year in on two occasions annually.

But that’s not the end of differences in the Christian realm. The coming Orthodox Easter Sunday will fall on the 24th of April in 2022, but Catholics and Protestants believe that Christ arose on the 17th of April. The same day, the Orthodox believers will be celebrating Palm Sunday, but their fellow Christians of Catholic and Protestant belief will already have done so on April 10th. Such are those minor calendar differences in the Christian Church, which likely purports no harm. And still, those little diversities do feel like a nuisance.

Why should we be divided even that much? Why does it make sense to be scattered all over the calendar? Would not Our Father hear us better if all of us prayed at the same time with the same zealous Christian heart, and with a Christian mind that brings us together rather than divides? Christians of the world, unite! Although the slogan is borrowed from the Communist manifesto, it might still work to the benefit of Christian believers all over the Earth.

Take our brother Muslims for example, be it Sunnites or Shiites: They all celebrate Ramadan the same day, without even a vestige of calendar distinction or spiritual disparity, unless my knowledge of religion fails. I am not ashamed of taking a good example from anybody who gives that good an example, because a good example is a good example, be it based on Christian or Muslim credos.

Religious dissimilarities and contradictions have never worked to the benefit of Mankind. Vice versa, they have instigated in history bloodshed and millions of deaths. And the differences within one and the same religion are even worse. Man is so funny: never sated with his ambitions, whatever those ambitions are associated with, be they major beliefs or petite principles. And some of those ambitions and aspirations are bizarre, if not totally stupid.

Conclusively, I would like to have the Christians of Georgia, in their sincerest entirety, celebrate Christmas and New Year and Easter, and whatever else there might be to celebrate, in peace and brotherhood, and in loving togetherness.