“I appreciate the open conversation with Georgian civil society on the conflicts in Georgia and South Caucasus, as well as women’s meaningful participation in peace processes.” – Ann Linde

Gakharia noted that the Government of Georgia is committed to continuing close cooperation with the Kingdom of Sweden, including through the OSCE Chairpersonship, with regional conflict resolution as one of the key priorities set by the Swedish side.

The conversation also touched upon the effective functioning and importance of the formats of the Geneva International Discussions and the Incident Prevention and Response Mechanism. Linde reiterated the OSCE’s support for Georgia in conflict-resolution and institutional empowerment efforts.

The meeting also paid attention to the country’s implemented and ongoing democratic reforms, seeking to empower Georgia’s most vital institutions.

“Grateful to my colleague and OSCE CEO Ann Linde for yet another visit to Georgia. Had an interesting exchange on issues of vital importance, including conflict resolution. It is pivotal that the issue of Georgia’s sovereignty & territorial integrity is to remain high on OSCE agenda,” David Zalkaliani wrote, later noting that the Russian occupation of Georgian territories poses security threats not only to Georgia but also to the whole of Europe. 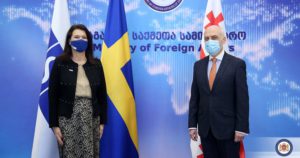 “I appreciate the open conversation with Georgian civil society on the conflicts in Georgia and South Caucasus, as well as women’s meaningful participation in peace processes,” the OSCE Chair stated.

Linde is also scheduled to meet with the Georgian President, Parliament Speaker and State Minister for Reconciliation and Civil Equality.