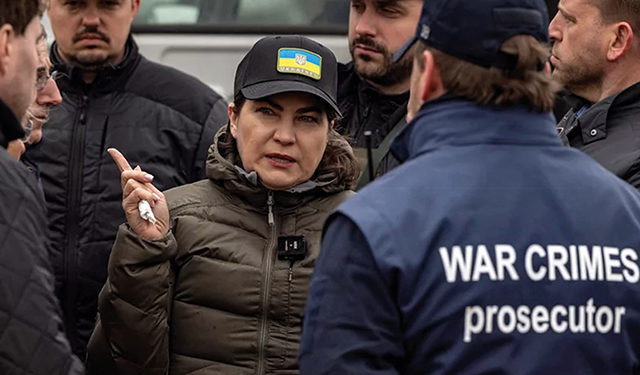 Ukraine's Prosecutor General Iryna Venediktova visits a mass grave in Bucha, on the outskirts of Kyiv, on April 13, 2022. By Fadel Senna/AFP via Getty Images

Note: This article is purely opinion. It is NOT in support of or to rationalize the Russian military actions and alleged crimes in Ukraine. It is merely an attempt to explore why this option is even open to Russian soldiers and their commanders from the point of view of a Western military mind.

The world was shocked after Russian forces began to retreat from their positions around Kyiv. Scenes of the streets of Bucha left people enraged and in tears. Imagery from the surrounded bastions in Mariupol stun Western audiences. Even the breadth of the destruction of soldiers and military vehicles have brought a litany of powerful emotions to viewers. However, it should come as no surprise that this is what the Russian military is doing. This, in fact, is the only way the invasion force can possibly pull some semblance of victory from the fires of destruction.

The reasons behind the decision to commit these acts go back to Soviet military doctrine. Overwhelming firepower and an “active defense” model allow the enemy to take ground but be hammered by thunderous artillery until the attack is unsustainable. Once the force is broken and cannot attack further, the motorized infantry and armor crush the remaining force in an unrelenting storm of attacks and scorched earth advances. This, along with the infamous weather, were the undoing of both Napoleon and Hitler. Simple.

This has been the underlying strategy in virtually all of Soviet and then Russian military doctrine. However, in the 1990s and early 2000s, Russia forces faced a more insidious enemy; insurgents and guerilla light infantry. The fluid and regenerative nature of these types of forces were able to withstand the unrelenting and oppressive force. In Chechnya, they leveled Grozny in order to subdue it. However, this only emboldened the defenders, and resulted in massive casualties in the urban assault.

In 2008, they discovered the new face of modern warfare. While technically and tactically overpowering the Georgian Army, they were unable to coordinate between themselves and deliver a decisive blow. Several incidents of friendly fire occurred, even resulting in the accidental downing of their own aircraft. In a combination of both frustration and confusion, civilian structures were torched, Georgian cities bombed, and innocent civilians shot.

Then came the reformation. After the Russo-Georgian war, the Russian Ministry of Defense set out to deliver a massive rehaul of the armed forces. From advanced targeting and fire control systems on armored vehicles to the new Ratnik infantry combat kit program, the entire force structure was rebuilt.
Their first, more covert, invasion of Ukraine, in 2014, was conducted with immense informational and electronic preparation of the battlefield. As the territory was already of Russo-Slavic persuasion, it was far easier to coax popular support for a puppet regime. Syria (another venture deserving of its own deep-dive) was a venture exercising this power into the Middle East.

For Russian soldiers, this is simply a means to an end. Civilians are either an obstacle to overcome or a bargaining chip on the battlefield

Fast forward to Ukraine 2022. A rapid strike to change the regime became a dogged street to street fight. Russian forces suffered a massive logistical and rear security miscalculation, leaving expeditionary forces stranded, airborne forces cut off, and supply lines vulnerable. After almost two months, a forced withdrawal under the guise of “shifting to Phase 2” began. However, it revealed the only means with which the Russians could subdue territory.

Russian troops at the tactical level are wholly unable to engage and destroy an enemy without brutal and withering supporting fire and immense casualties. Despite the new look of Russian soldiers in Western-style kit, they are not far from their 1990s precursors. Coupled with abysmally low morale, poor training standards and inexperienced leadership, these forces know that brute strength and ignorance can still win.

One thing of note is the leadership structure in the Russian army. Unlike what many Western soldiers and veterans are used to, the Russians have a virtually non-existent Non-Commissioned Officer (NCO) framework. In the United States Army, it is often said that the NCO is the backbone of the Army. Sergeants are the core of a soldier’s upbringing in the formative years in their military service.

Millions, even billions by some estimates, are poured into the training, development, and broad education of America’s NCO corp. NCOs are notoriously sent to various courses to expand their technical and tactical prowess. By the time a junior NCO becomes a senior NCO, company or battalion level, they have over a decade of experience and training behind them. This is used extensively to train and develop the junior enlisted, and so the cycle continues.

The Russian army is a different matter. Russian army NCO are not tasked with the same leadership roles that many are in the West. Rather than being tasked with the professional development of their subordinates, they are simply more senior soldiers. This significant change has been termed a difference between “enlisted professionals” compared to Western “non-commissioned officers.”

The psychological distance between the Western and the Russian soldier is massive. For the Russians, the political and career goals are far more of a concern than the costs to achieve them

Much of the leadership, command, and control responsibility is shifted to the officer corps. While their officer training regimen is certainly not subpar, it is very narrow in scope. Whereas many NATO officer candidate programs aim to build flexible and tactically creative leaders, the Russian model is focused only on teaching the technical aspects of the officers’ occupational field. This tight focus on doctrinal thinking creates leadership that problem-solve on the battlefield in a linear method, with little room for deviation, leading to a fighting force that is prone to frustration and anger. As always, it is either the enemy force or the civilians that will bear the brunt of this. For Russian forces in Ukraine, it was both. In their mind, if the populace would not support them, they would be placed in a position where they had no choice.

The assault on civilian populations is the natural response to weeks fighting a determined enemy. Watching their squadmates killed by the dozens due to inept or delayed leadership decision making, reprisals are their natural response. The leadership is unwilling, unable, or both to contain this criminal violence. According to some intercepted radio communications, the tactical-level leadership were the ones encouraging the crimes. Rather than face an insurgency, the old Stalinistic tactic of “no man, no problem” has resurfaced.

While they attempt to take hard fought for cities, such as the coastal town of Mariupol, the mass destruction is only the tip of the iceberg. Again, incapable of precision strikes and defeating a near-peer enemy in urban combat, they have resorted to a “wasteland” strategy to achieve victory. Indiscriminate shelling would encourage the populace to leave and the defenders to surrender to preserve their city.

Striking key resources will cut them off from essential infrastructure, such as electricity and water.

Regardless of the conditions of civilians on the battlefield, isolation and deprivation of essential resources for the enemy takes precedence. Russian commanders see this as a far more expedient method of warfare than what they saw as inefficient and tedious tactics used by the United States and NATO in Iraq and Afghanistan.

Many operational level commanders are unconcerned with the rate of losses of both men and equipment. For them, the political and career goals are far more of a concern than the costs to achieve them. If this means leveling entire city blocks and incurring a humanitarian disaster, that is well worth the career boost of getting to report victories. Conversely, it would be a career ending move to report anything less than success. This is another holdover of the Soviet-era structure that has sadly remained and cost innumerable lives, both military and civilian.

The psychological distance between the Western and the Russian soldier is massive. For an American or NATO soldier to knowingly fire upon a civilian or civilian occupied structure or vehicle is virtually inconceivable. In the few times it does happen, the perpetrators are swiftly prosecuted, along with immense media fanfare. After their names and mugshots are paraded through the media channels, they often spend the rest of their lives in a military prison.

For Russian soldiers, this is simply a means to an end. Civilians are either an obstacle to overcome or a bargaining chip on the battlefield. As seen in Ukraine, they have seemingly attempted to use their deaths as a psychological weapon against Ukrainian defenders. Additionally, they are a virtual hostage to pressure Kyiv to sue for peace on Russian terms. While the full scope of the devastation has yet to be fully calculated, it is likely the full civilian toll has yet to be taken.