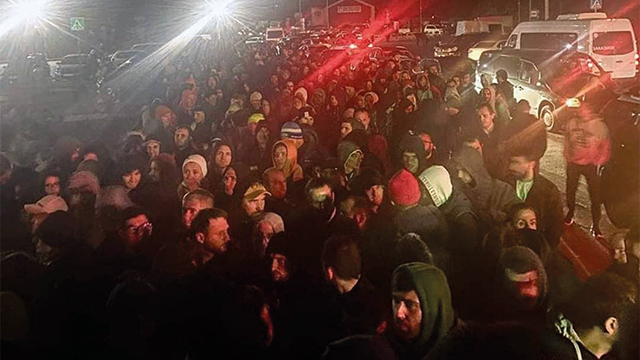 “Only those citizens of Russia who are currently in the reserve and, first of all, those who served in the ranks of the country’s armed forces, have a certain military specialty and relevant experience, will be subject to military service,” Vladimir Putin said in his address to citizens.

He claimed that “the decision on partial mobilization was made to protect Russia, its sovereignty, territorial integrity and to ensure the security of the Russian people.”

“Movement is very slow and some people are waiting for more than 20 hours to cross the border,” the correspondent wrote.

The flow of people has also grown on the Russian-Finnish border. The Finnish authorities said the number of Russians arriving in the country had doubled in the last week and on Thursday said they would be following the example of other EU countries and shutting their borders to the Russians fleeing their country.

FSB Confirms that Russian Military Has Moved towards Larsi Checkpoint “To Enforce Order”
The Federal Security Service (FSB) on September 26, confirmed that a Russian armored vehicle was moving in the direction of the border of Georgia, towards the Zemo Larsi checkpoint. As the agency noted, there are no plans to open an additional military checkpoint near Zemo Larsi.

“BTR is moving in that direction, but not to open a checkpoint there – we sent the military to pay attention to maintaining order. This is, so to speak, a preventive measure in case the reservists decide to break through the checkpoint and move to Georgia without signing any documents. The checkpoint is working as usual, no additional restrictions have been imposed,” said an employee of the border service of the FSB of Ossetia.

Rumors that Russia might declare martial law and close its borders were actively spread immediately after the mobilization was announced. 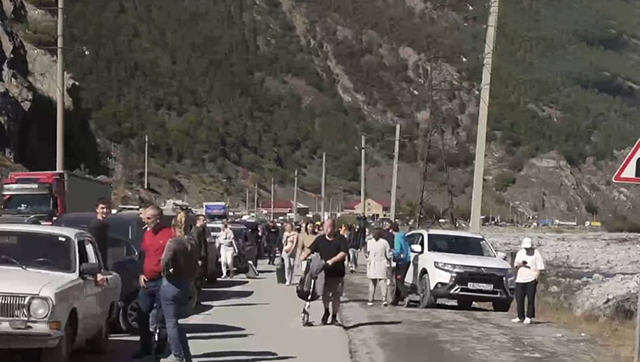 International Reactions
“The nation of Georgia would be wise to close their border and not allow Russian tourists at least in the short term,” American congressman Adam Kinzinger wrote this week.

“An influx of fighting-age males into this small but important ally is very dangerous. We must see it’s a sacrifice, tourism is important,” the congressman wrote on Twitter.

Pawel Herczynski, EU Ambassador to Georgia, stated: “Unfortunately, I cannot tell what should be the attitude. It’s for Georgia and the Georgian authorities to decide. Of course, I can fully understand that the decision of the Russian President to start partial mobilization has created an influx of Russians, but it is for Georgia to decide.”

The Ambassador of Austria in Georgia, Thomas Mühlmann, stated: “It is not up to me to give recommendations to the Georgian government. But I see that many Russians are trying to come to Georgia, and I know that this is a big challenge for Georgia, but I am sure that the government will be able to deal with it.”

Ruling Party Response
“One of the main reasons for not closing the Russian-Georgian state border is that our fellow citizens live in the Russian Federation and they are also interested in entering Georgia – a priori closing the border will not be correct and it will first of all harm the interests of Georgians,” chairman of Georgian Dream, Irakli Kobakhidze, stated.

Kobakhidze added that “apart from this, there are many issues that should be taken into account,” adding “the country’s security will not be under threat under any circumstances and the situation is under control.”

“State agencies are responsible for controlling the situation, and the situation is currently under control from beginning to end. Of course, it is fundamentally important for us to protect the interests of people who left Georgia and are living in Russia. All issues must be measured. This is the business of state agencies. And they work responsibly. The country’s national security interests were protected and will be protected to the end,” he told journalists.

Minister of Finance Lasha Khutsishvili stated: “Customs and border control are carried out according to the established rules – relevant information is collected at checkpoints, analyzed and only after that a decision is made regarding specific persons. In this direction, each agency responsible for border-crossing is working very intensively. The workload of all agencies that actively monitor the rate of border crossing and are responsible for both security and fiscal order has increased.

“In this situation, we all see that the flows have increased both in terms of cargo and physical persons. The situation is under control. There is no dramatic situation at the borders. The number of people entering and leaving the country has increased, therefore, this issue is being strictly monitored.”

“The flows at the Larsi checkpoint have increased,” Deputy Minister of Internal Affairs Aleksandre Darakhvelidze acknowledged. “Usually, during the day, there were 5-6 thousand Russian citizens entering. That number has increased by 40-45%. The Ministry of Internal Affairs does everything that is defined by the law. Each citizen is examined. If they do not meet the requirements defined by the law, they are denied entry. All necessary measures are being implemented. We are controlling the situation there as much as possible, and additional forces have been sent to Larsi.”

“After September 21 of the current year, the number of people entering from Russian Federation increased at the Georgian-Russian state border,” the MIA writes.

“Based on the public interest, the agency, therefore, is publishing data collected within the last 10 days. In particular, all border crossing points of Georgia have been crossed in both directions (entry-exit) by the following number of people:

The Ministry of Internal Affairs notes that in order to effectively manage the increased influx from the Russian Federation, police teams have been additionally deployed at the Dariali border crossing point for border migration control procedures, ensuring public order in the vicinity of the border checkpoint as well as for the prevention of potential violations of the law.

“In addition to the mentioned, a unit of the State Security Service is permanently present at the border checkpoint, to ensure security and identify the risks,” the MIA notes.

The report mentions order control procedures carried out with special observation, in full compliance with the acting legislation of Georgia.

“In the recent period, the number of citizens who are not allowed to enter the territory of Georgia due to the reasons stipulated in the legislation has increased. Therefore, questions are being raised more frequently on the rules of admission and the reasons for refusal.

“According to Article N12 of the Law on the Legal Status of Aliens and Stateless Persons of Georgia, any citizen of a foreign country, upon entering Georgia, undergoes an inspection at the border crossing point, as a result of which they are either given permission to enter Georgia, or denied entrance and are not able to cross the state border. The inspection/interview of each foreign citizen is carried out in accordance with internationally recognized best practices.”

It is also noted that the border guard makes the decision to grant or refuse entry to a citizen of a foreign country as a result of evaluating various factors and circumstances.

“The inspection/interview process of citizens for identifying persons with high risks at the border-crossing points, and arrangement of the checkpoint as well as road infrastructure during movement in conditions of the increased influx, to a certain extent, leads to the formation of queues, which, at the same time, requires an increased period of time for registration,” reads the statement.

A statement published by the party this week notes that the ban should not apply to Russian citizens of Georgian origin, who should be allowed to cross the border from Russian territory.

“After Russia attacked Ukraine, Russian citizens began to enter Georgia, and by now their number is approaching a critical limit. The flow increased especially after the announcement of military mobilization by the Russian authorities. The current situation threatens the national interests of Georgia and the security of our country,” Strategy Aghmashenebeli representatives claim.