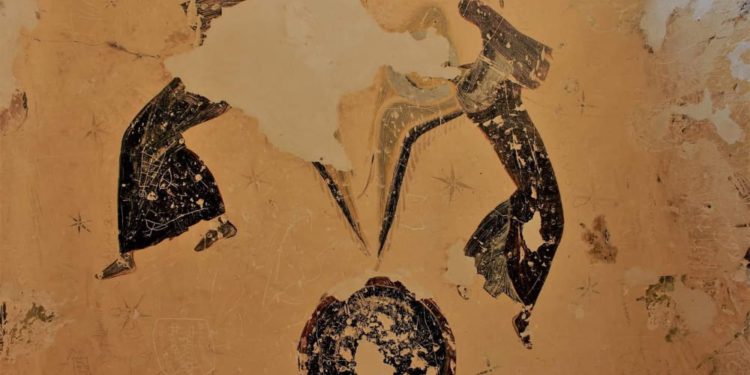 Activists Union Movement for Cultural Heritage (the Sakdrisi Committee) is starting to fight to save the unique wall painting of Kolagiri Monastery.

On November 9, members of the Movement for Cultural Heritage (the Sakdrisi Committee) arrived in one of the monastery complexes of Davit Gareji – Kolagiri – to get acquainted with the condition of the stones and wall painting. At the request of the activists, archaeologist Keti Digmelashvili, a specialist at the Georgian National Agency for Cultural Heritage Preservation, was also present.

Unfortunately, due to the fact that the XII century monastery was carved into a mountain conglomerate made of clay-cemented rock, its destruction has been irreversible for centuries. Today, only the western part of the monastery is preserved, and it is still collapsing. Currently, only a few caves with unique frescoes remain on the ground.

The Kolagiri wall painting (1178-1185) is in a particularly difficult situation, which, in addition to natural processes, has also been the victim of vandalism by irresponsible citizens over the years, resulting in the destruction of most of the unique frescoes.

Traces of “black archeology” can also be seen in the caves.

Specialists think that the monastery will soon fall to total ruin, however, it is still possible to save the wall painting, so the Sakdrisi Committee is starting to fight to save it.

The Movement has already appealed to the Prime Minister of Georgia and all relevant agencies to establish a complex group of geologists, architects-restorers, hydrologists, art historians, wall painting specialists, etc. which will work towards assessing the rock structure and wall painting.

After making appropriate conclusions and recommendations, an action plan for the survival of the Kolagiri monastery complex should be created.

The Movement has already written a letter to the world-famous rock monuments specialist, UNESCO expert Claudio Margottini, asking for an initial assessment of the condition by attaching appropriate photos. 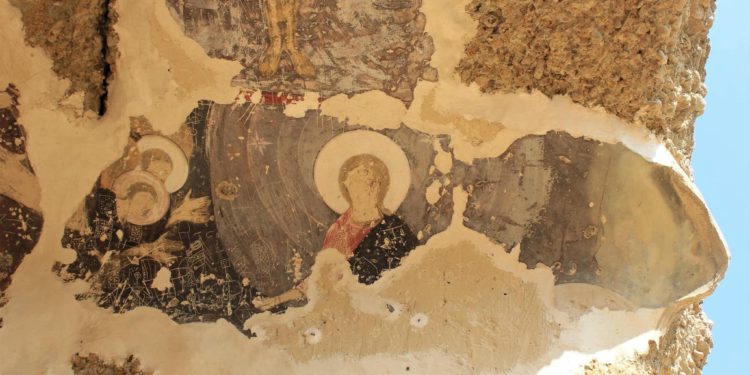 Activists plan to meet with scientific groups in the near future to better protect the interests of the monument.

Nino Burchuladze, a member of the activist’s union Movement for Cultural Heritage, explains the current condition of the ancient monument and elaborates on possible solutions to be taken in order to save it:

“Several days ago, I was informed that the local citizens noticed a strange cave on the banks of the Iori River. They were wondering what was inside, so they entered the cave and found out amazing and unique frescoes and wall paintings. As this place was unknown to them, they informed media representatives about it. We also asked archaeologist Keti Digmelashvili about this monument, and she informed us that it was the Kolagiri Monastery, a part of Davit Gareji Complex. Specialists think that the Monastery can not be saved due to natural processes on the ground, however, it is still possible to save the unique frescoes. As the Movement for Cultural  Heritage (the Sakdrisi Committee) is actively involved in the issue of preserving Davit Gareji as an important cultural heritage monument since 2019, obviously, we got very excited and interested in this topic. We’ve been demanding to create a working group of experts consisting of both Georgian and Azerbaijani specialists to work on the issue of preserving Davit Gareji Monastery Complex over years. 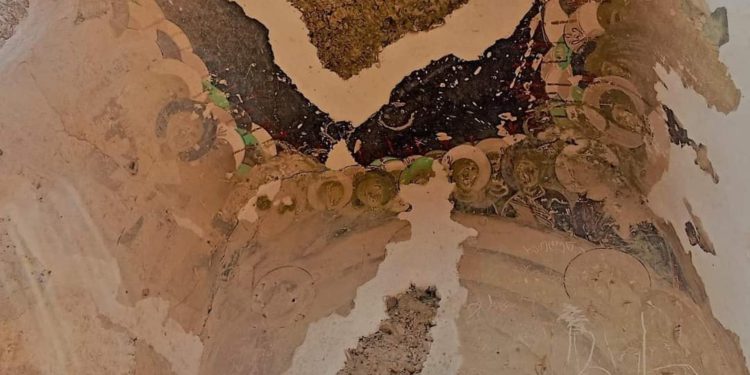 “Now, the issue of Kolagiri Monastery turned out to be a very sensitive and important topic for us, accordingly, we immediately visited the monument together with Keti, as we often collaborate with her on various issues and she often helps us with her experience and knowledge. What we saw on the ground turned out to be very hard for us, as the monument is in grave condition. In addition to natural processes, the cases of vandalism carried out by irresponsible citizens significantly damaged the monument. As a result of their behavior, this unique wall painting is damaged and distorted. The Monastery preserves unique frescoes and information about less-known figures from the history of Georgia, so it carries both historical and cultural importance.

“Immediate action is necessary to save even the wall painting of the monument. Upon visiting Kolagiri, our organization released a statement addressing the Prime Minister of Georgia and all the relevant agencies for help, demanding the creation of an experts group consisting of geologists, hydrologists, art historians, architects, wall painting specialists, etc. to evaluate the condition of the monument and offer solutions and recommendations, based on which the action plan will be created. We also addressed the Prime Minister personally with this request. We’re also going to meet scientific groups in the nearest future to think about the methods of our fight for saving these unique examples of wall painting. Also, we’re launching an informative campaign to raise public awareness about this monument, as the opinion of society always plays an important part in saving historic monuments. We believe that we will manage to save kolagiri, and it might become the 7th monument saved by the activists of Movement for Cultural Heritage (the Sakdrisi Committee). The other monuments saved and protected by our activists are Pitarety Monastery, Satkhe Monastery, Abulmugi Persian Bath, Ananuri Fortress-Complex, Samshvilde and the House of Baratashvili Family in Tetritskaro.”

Archaeologist Keti Digmelashvili notes that apart from the central part of Davit Gareji, the so-called Gareji Lavra, other parts of the monument, such as Kolagiri Monastry, are no less important in terms of both cultural and historical value.

“Gareji includes up to 21 monasteries in total, of which 2 monasteries are no longer located on the territory of Georgia: Bertubani and Chichkhituri. Kolagiri is one of these 21 monasteries from the 12th century, actually, it’s not a big monument, however, it can be called an „elite monastery” due to its importance and is a spiritual center of one of the noble families of Georgia.

“Considering the relatively weak structure of the materials used for building the monument, and due to the fact that the XII century monastery was carved into a mountain conglomerate made of clay-cemented rock, its destruction has become irreversible for centuries. The process of dismantling still continues. Also, natural disasters such as earthquakes pose serious risks to its existence. Presumably, exactly the quake that occurred in the 13th century caused significant damage to the monument. The Kolagiri Monastery was forgotten for years and studies around the Monastery were resumed in the 20th century. Now, its destruction has become very difficult to be stopped, however, at least its unique frescoes and wall painting can still be saved, so all the relevant agencies and experts should take an action. 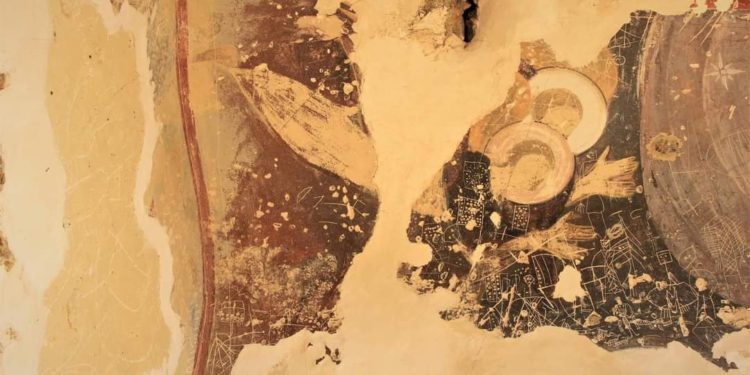 “Georgia has experience in this field, so there is a chance to save the Monastery. Once the experts’ group draws conclusions and recommendations on how to act, the actions should be taken immediately, as the frescoes are already very damaged and the process will become worse over time. In the 90s, when the research was carried out regarding the monument, there were 9 portraits of historical figures preserved on the spot. Today, only 6 portraits remain, as they are being damaged and lost over time due to natural processes and vandalism. There are also traces of black archeology found on the ground, which indicates that some persons were searching for something.

“To conclude, immediate action is necessary, otherwise, these unique examples of wall painting will be lost. Even a single earthquake can destroy it completely,” the archaeologist elaborated. 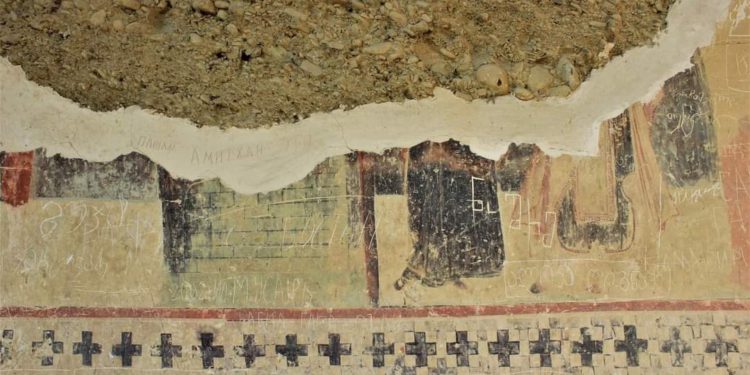 Members of the Movement for Cultural Heritage promise that they will not spare efforts to save Kolagiri Monastery and preserve its ancient frescoes which are so important for the Georgian culture and history. However, coordinated work of the state, relevant specialists and the society will be required to achieve this goal.