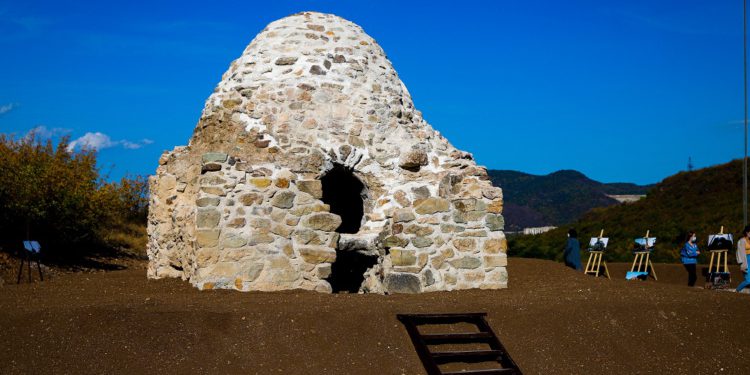 The transfer of the cultural heritage monument, the Abulmugi Persian Bath, to a new, safe area has been successfully completed.

The Abulmugi Bath was discovered during archeological works in 1977, when the Arakhlo-Kazreti expedition of the State Museum was working on the territory of the historic small town of Abulmugi.

The Abulmugi Bath is a Persian building typical of the late Middle Ages (XVII – XVIII centuries). During the excavations, a coin of Queen Rusudan was found nearby, as were fragments of glazed pottery (now kept in the National Museum). The existence of water supply systems at the monument was also confirmed during the expedition. A clay oven (tone) was examined near the bath, which it seems was built after  demolition of the bath.

The first conservation work on the monument was carried out in the 1970s, although by 2018 the condition of the bath had become alarming.

The Abulmugi Persian Bath has been protected by the Sakdrisi Committee since 2014. At the request of  activists, in November-December 2018, urgent fortification works were carried out on the monument.

In August 2020, at the request of the Sakdrisi Committee, archeological-cleaning works started at the Bath. At the same time, consultations were held between the Sakdrisi Committee and the National Agency for Cultural Heritage Preservation in order to assess the condition of the monument in a timely manner by relevant specialists in order to plan effective measures for the survival of the monument.

The study was conducted in September 2020, which found that despite a number of measures taken to preserve the monument, its condition remained bad, and a geological report showed that the monument was endangered not only by age and vegetation, but also by geological processes taking place on the territory.

In October 2020, at the request of the Sakdrisi Committee, consultations resumed to find more effective ways to save the monument, including radical ones.

As Abulmugi Bath is located in the production area of ​​the mining company RMG, the company fully funded the works carried out on the monument in 2018-2020, at the request of the Sakdrisi Committee. The protected area of ​​the monument was fenced-off, and a 24/7 surveillance camera was installed to monitor the natural processes taking place in the territory of the monument.

In 2021, the National Agency for the Protection of Cultural Heritage considered it permissible to relocate the monument due to its dire condition, in order to save it. The Sakdrisi Committee made a principled request: “in order to preserve the authentic structure of the monument, it should be relocated intact, without dismantling, which will be the first such experience in Georgia.” After the issuance of the relevant permits, the general fortification of the monument began in April 2021 for its future relocation. The Sakdrisi Committee was fully involved in the four-month, difficult process of monitoring. 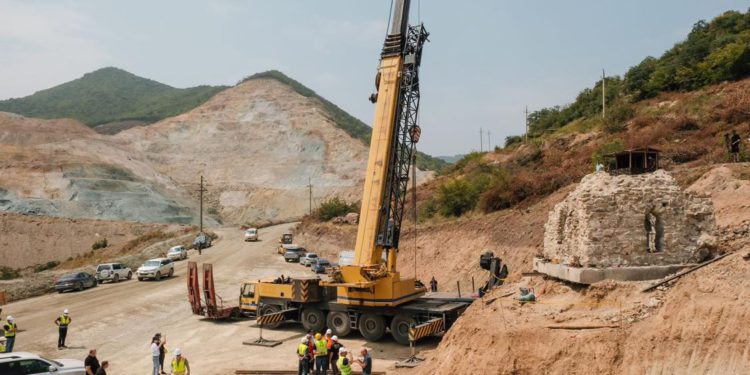 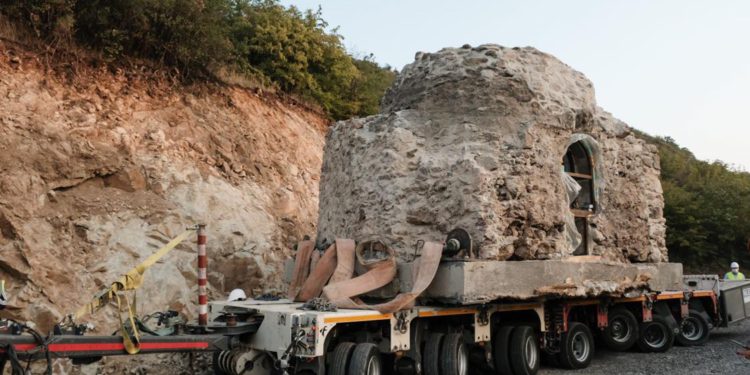 The relocation works were conducted by the company Bagineti+.

On August 18-19, 2021, the relocation of the 134-ton cultural heritage monument, Abulmugi Bath, was successfully completed.

The selected location and its landscape are fully adapted to the monument, meaning the content and character of the monument were not violated in its new environment. Infrastructure works are currently underway in the vicinity of the monument, and in the near future, this place will become even more attractive for visitors and locals.

During the presentation of the rehabilitated historic monument, Nino Burchuladze, a member of the Sakdrisi Committee, addressed the audience and thanked all the sides involved in the process of saving the Abulmugi Bath.

“The monument was in a grave condition. In November 2018, at the request of our Committee, urgent fortification works were carried out on the monument. As Abulmugi Bath is located in the production area of ​​the mining company RMG, the company fully funded the works carried out on the monument. Then, as we could not stop the demolition process, we requested a geological survey, which once again proved the dire condition of the monument, mainly due to natural processes. We had consultations with the National Agency for Cultural Heritage Preservation to plan effective measures in order to save the monument. Then I came up with the idea of moving it intact, without dismantling, which would have been an unprecedented fact in Georgia, although it was a very difficult and risky process technically. Due to a strong desire to save the monument, we took a risk and it turned out successful, which makes us very happy and proud!

“In 2021, the National Agency for the Protection of Cultural Heritage considered it permissible to relocate the monument. Very hard work was done in order to preserve the authentic structure of the monument during relocation. However, it was associated with high cost (up to 600,000 GEL), which was fully allocated by RMG. Finally, as a result of hard work and joint forces, we managed to implement this unprecedented project in Georgia and safely relocated this important monument! Now it has a new location, more accessible for tourists, and it has a new life, and visitors of Kvemo Kartli can browse its unique beauty. Infrastructure works are now underway, including greenery, to make this location even more attractive to tourists. Bolnisi Museum, Satkhe Monastery and Abulmugi Persian Bath will be the three main tourist attractions in this area.” 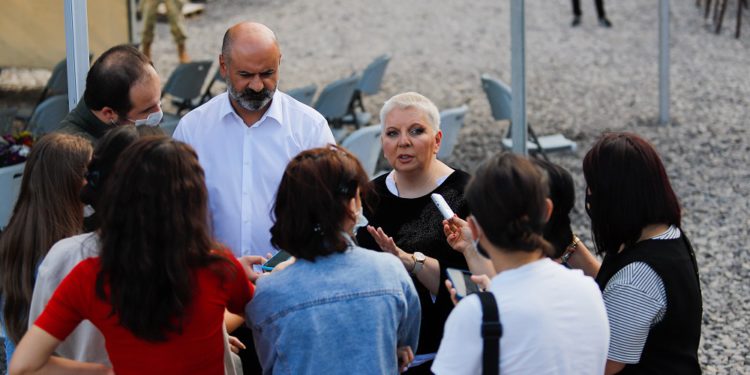 Kakha Mchedlishvili, Corporate Director of RMG, noted that, “the Sakdrisi Committee has been protecting the Abulmugi Persian Bath since 2014. As it was located on our production territory, we considered their requests and started working on this project. A very experienced company, Bagineti+, was involved in relocation works, although they had no experience of moving an entire monument safely, actually, no-one has, as this was an unprecedented case here in Georgia. Without the Sakdrisi Committee and their dedicated work and constant monitoring, this project would not have been so successful. Today, we see this monument even more beautiful, moved to a safe place, accessible to all visitors, and moreover, the experience which both Sakdrisi Committee and Bagineti+ received through this process can be useful for other companies working in this direction. We are happy to see the result of these works, although it was not easy. Most importantly, we, RMG, and the Sakdrisi Committee, managed to overcome certain well-known disagreements, and worked in a constructive manner for the best interests of our country and for preserving our valuable cultural heritage. Hopefully, this will be exemplary for other companies. We are also working on other projects and our collaboration is expected to continue in the future.” 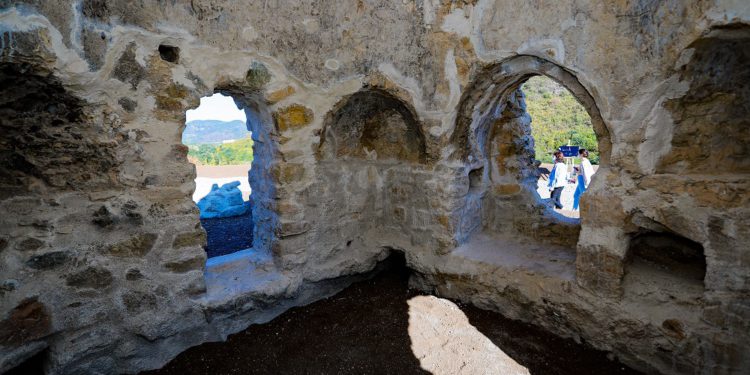 “We had several versions on how to relocate the monument. Finally, based on a fair request of the Sakdrisi Committee, it was decided to move the entire monument, without dismantling. All of the workers involved in the process showed exemplary professionalism and dedication, often even risking their own lives. Notably, all of the specialists were Georgians, and they received a different and new experience through this project. Other businesses should also consider this practice to save more cultural heritage monuments. Fortunately, we, representatives of business, activists, workers and specialists of the field, proved that we can perform well and do good work for our country together.”

In May 2016, the construction of an aerodrome in the city of Mtskheta, a UNESCO-listed city, was halted by the activities of the committee. Construction is still suspended.

In 2019, the Sakdrisi Committee has stopped the illegal construction of a hotel in the Vardzia Museum-Reserve Visual Protection Zone. The works are still suspended.

In October 2019, the Committee suspended the privatization of the Baratashvili family house in Tetritskaro, which was aimed at opening a restaurant in the historic building. The Sakdrisi Committee is still fighting for the preservation of this house.

At present, with the initiative and active involvement of the Sakdrisi Committee, the following rehabilitation works are underway:

The struggle of the Committee for the protection and preservation of cultural heritage actively continues today.