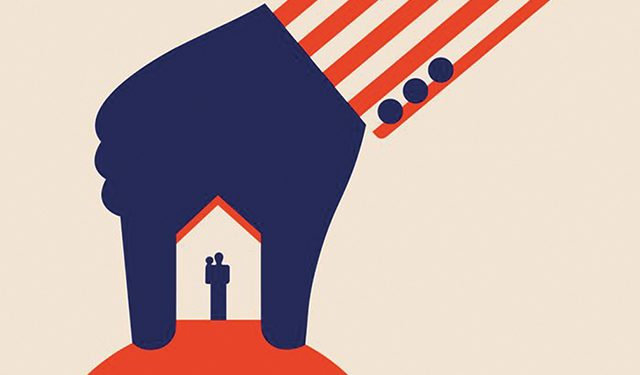 Illustration by Angus Greig for Barrons.com

The first two parts of this article were dedicated to the specifics of the Georgian case in the context of the modern security dilemma, and we discussed current trends and possible solutions. However, as with any nonlinear topics, discussing general issues is one thing while highlighting special “implementing” nuances, describing them in detail and evaluating them is a different (and specifically difficult) task.

It is apparent that in the conditions of this (dis)orderly world, the problem of the Georgian polyhedron is a good example of a puzzle of the abovementioned category. In this case too, agreeing on “what we want” is a separate challenge while realizing how and by what means to achieve what we set as the aim is an additional objective.

Since we already talked extensively – by making assumptions as well as affirmative statements – about so-called framework theme of the Georgian security dilemma, in this part we will discuss operational methods and practical approaches of facilitating-strengthening Georgian security (in the broad sense of this word) for the interested audience.

Higher security with economic and social levers
We have repeatedly stated that “security,” in the modern sense of this word, means significantly more than a defense system and armed forces. In the system of global relations, a broad overall notion of security is, in addition to various formal or situational relationships and configurations of military security, linked with the wholeness and health of the system of social relations primarily inside the country.

We think that one of key components of that wholeness and health is the national socioeconomic policy that is easily comprehensible, competitive for equal opportunities, and is based on co-participation by deeds, not words and inclusiveness. As regards smaller countries with their external and internal challenges, we think that an additional means of socioeconomic nature for national-social resilience is a greater implementation of welfare state model in practice.

The welfare state model is periodically discussed in Georgian media too. We have also published several articles on this topic. This model, if put concisely as we understand, is based on a larger participation of the state to ensure social justice, equal economic opportunities and to tackle challenges faced by citizens.

At the same time, apart from a reasonable and well-thought-out management of state budget expenditures for citizens’ social needs, the responsibility for social participation also lies with the corporate segment of the country. A return from a business model that is oriented on excess gains, the so-called wild capitalism, to a relatively more responsible model, will not only help Georgian companies improve their moral image, but will also open up possibilities for the country’s global competitiveness and adaptability.

Such transformation will produce many positive effects: citizens will get a better understanding of the country as their own, the state machinery and business circles will notably reduce a possible estrangement of society from them. Furthermore, the recovery of genuine meritocracy in economic activity and public sphere will reduce the main threat to social stability – excess inequality in revenues as well as in the access to possibilities of development. This process will also entail the decrease of hotly debated polarization to a permissible level and turn the struggle for power in the political life into a battle of ideas for the development.

All this will serve the aim of filling dangerous cracks in the social and political process in the country, minimizing vulnerabilities, balancing risks with economic and social levers, and, hence, strengthening Georgian security.

Higher security through stronger regional ties
The course of Euro-Atlantic integration and the related security “shield” remains the main vector of Georgia. At the same time, no force can change our complex geographic location and unpredictable neighborhood. Such a reality (seeing Georgia described as a “geographic prisoner” at a meeting held in Oxford some time ago) must be accepted and not only accepted but set as the priority of state security, needing to be adapted, adjusted to our favor, in short, requiring constant work.

When talking about the region we cannot expect the approximation of political systems or harmonization of external goals; it is also unrealistic to strive for a regional harmony that will ensure an eternal peace and stability in the region. Such a gift “from heaven” is unimaginable in the modern world and it is especially hard to achieve in the greater Black and Caspian Sea region.

In any case, the management of the Georgian security dilemma particularly requires a closer contact with the reality of practical needs, not useless ideological cliches; as well as thematic communication of Official Tbilisi with that geopolitical neighborhood or regional actors that have a similar understanding of “risk” and “threat.” Why primarily risks and threats? Because if we stop seeing the world through rose-colored glasses, we’ll see that a situational and structural unity of countries primarily depends on a shared threat, not loudly declared pathetic statements. Neighboring-regional dimension of Georgian security must be expressed in, maximum, sharing by others of the threat in the Georgian understanding, and, minimum, in correctly identifying points of convergence of others’ threats.

When talking about the Georgian dilemma in the context of regional security, one must necessarily underline a constant care about a functional need and “usefulness” of our country. This may happen only through implementation of large-scale projects that are based on systemic vision. Georgia already obtained a relevant historic memory and experience at the turn of previous and current centuries. Now this historic memory needs to be refreshed by implementing new transborder and regional projects. It is unarguable that along with a common understanding of abovementioned “threat,” a closer integration of Georgia into the interconnectedness and interdependency system will become an additional practical means of managing Georgian security system. An attempt to make someone “like” or “befriend” you in the modern world is a generous and exciting but insufficient and illusory endeavor. When it comes to a country, it is necessary to make others to need you and in light of that need, to act pragmatically for a better management of your national security in this stripped-of-romanticism modern world.

By Victor Kipiani, Chairperson of Geocase