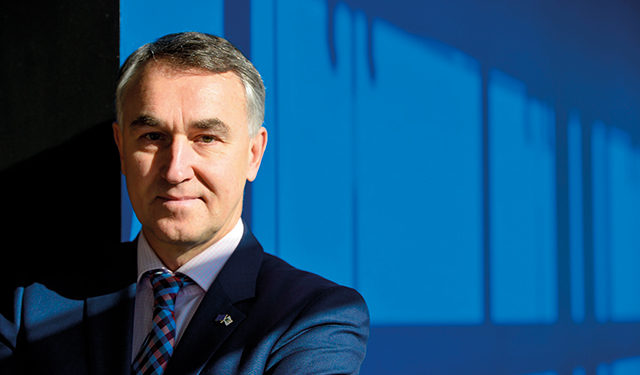 Lithuanian MEP Petras Austrevicius is a longtime friend and strong proponent of Georgia and Ukraine’s Euro-Atlantic aspirations. He was one of the members of the EP fact-finding mission that recently visited Ukraine. While there, he shared his take on the situation with Radio Free Europe.

Impressions of your Ukraine visit? What did you see? And based on what you saw, what do we expect will happen there next?
What can I tell you? I think Ukraine is very different now than it was in 2014. We saw a very determined military this time. No panic, just preparations and acknowledgement that a risk exists. But, you know, Ukrainians are used to it after a war ongoing for eight years. And while politicians have to handle the economic situation, loss of investments, political infighting, I think we’ve been really assured that for Ukraine, European integration remains a priority. On our side, we brought not just a declaration of support, but tangible things which are needed for the economy, like 1.2 billion in macro financial assistance, joining the lethal weapons and military ammunition provided by an increasingly bigger group of NATO and EU member states. And this is a demonstration of our readiness to stand by Ukraine. We sent a message to Russia.

The West’s position now is that new sanctions will only be introduced if new military escalation happens. So what about the huge economic loss and harm that Ukraine has already suffered by Russian troops just standing there at the border?
This is a very good point. From my point of view, the most likely scenario of developments in Ukraine is a long-standing tension and pressure on Ukraine from the Russian side. It’s a huge economic pressure. And we have to work out how to assist Ukraine in this regard. I would consider this already an act of hybrid war against Ukraine. I think we have more than enough arguments for sanctions against Russia even now.

We are too tolerant in watching this ongoing war against Ukraine. In Putin’s strategy, this debilitation of Ukraine is a major, major task. And he does it continuously, using numerous different instruments and means. Russia has broken every international agreement, treaty and convention when it comes to Ukraine. It has turned into a European Gendarme of sorts. And this is absolutely unacceptable. And they are going to use this policy line as long as we accept it as normal. It’s not normal. We have to be vigilant and maintain a smart understanding of the situation and not just sit and wait for military involvement in this war, because an economic war, cyber war, and hybrid war is already happening.

Speaking of being vigilant and being smart, do you think that right now the Western Front is vigilant, smart and most importantly, united enough?
In spite of some differences, I think we still see quite a united Western response when it comes to Russia. So far, so good. But I’m not sure that there will be enough understanding and interest to keep this united position for long, because it’s a long-term engagement, and sometimes I see the West getting tired.

There are some Western politicians who are like doves of peace, thinking about reconciliation or compromises, but those compromises will be made at the expense of Ukraine, at the expense of European security. That’s why we have to keep this understanding, unity and common action going as long as possible. Because Russia will never tire of it. They are trying to introduce instability as the new “normal.” We should not expect Russia’s policy today to change tomorrow. No, they will not change. 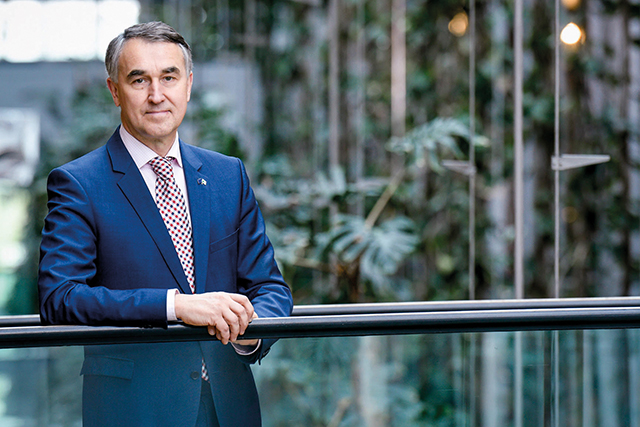 Putin made a very peculiar statement during his meeting with President Orban. He said “Imagine Ukraine is a NATO member, and it tries to militarily retake Crimea or even Donbas. What should we do? Should we fight NATO?” And he meant this as a question for the West to answer. What are your thoughts – is that a justified concern?
Ask President Orban what he said to Mr. Putin, representing an European Union and NATO member state. What was his response to this fake message from Putin? Putin wants to convince everybody around that Ukraine is getting ready for war and aggression against the people of Russia, twisting the reality. The Kremlin is painting an enemy from a peaceful nation. Who is suffering from aggressive acts – Moscow or Kyiv? I wish Mr. Orban had asked Putin this in Moscow, and not just stopped by for a friendly cup of tea.

There are fears that Crimea won’t be the last piece of post-Soviet land the Kremlin will try to snatch away. Just how far do you think Putin is prepared to go?
What Putin wants to do is act out a kind of “salami” policy. He is taking that salami piece by piece, territory by territory. And it’s never enough; he is not satisfied and goes for the next piece, as long as that salami remains on the table. Let’s not be Putin’s salami. Let’s not be passive observers who are cut and lost piece by piece. It’s unacceptable. We know Putin is dreaming about rebuilding the former USSR. What that new USSR is for him only he knows. But as long as we remain a soft power, we are a potential piece of salami on Putin’s table.

On to Georgia now – what impact is this crisis going to have?
Georgia remains a hostage of Russian policies, with lost and occupied territories. Georgia is in a very peculiar situation. With what’s going on in Ukraine, I think Georgia is being given a message: When we’re done with Ukraine, it will be Georgia’s turn. Next time, it might be a concentrated army on the Georgian border, and this might happen very quickly. Ukraine is almost 10 times bigger than Georgia. So Putin started from the biggest piece of the Eastern Partnership.

More and more often, we hear EU officials and politicians commenting on Georgia with poorly hidden disappointment. Why?
Disappointments come and go, but, of course, in the end, the elites are still lacking mobilization, national unity, a clear strategy, and everyday commitment: Everyday- not just from time to time. But I have to admit that there is a greater resistance towards those political and economic reforms, instigated in many cases from outside, from Russia. And they have very strong fifth columns in all Eastern Partnership countries.

What would that column be in Georgia’s case?
In Georgia’s case, we have a not necessarily completely committed ruling party, Georgian Dream. And within that party, there are, of course, different people that have different attitudes. But I don’t see a leadership commitment to act in a European way. They proclaim it is still on the agenda, but I presume they have a very political and individual agenda, and it does not correspond to the European understanding of how things are done.

I have to admit that Georgia is no longer the best example of a strengthening democracy, strengthening civil society bringing more confidence into domestic policies. It’s got a long road to go, and I’m sorry to say that the leadership declarations and actions go very much against our understanding of how it should be done according to the European practice.