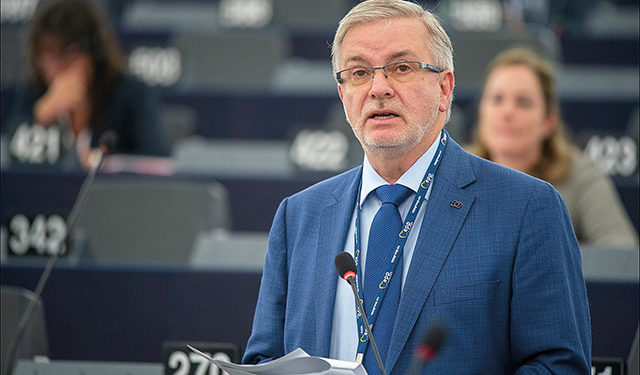 After a week of fruitless talks between Russia, the US and NATO, it seems that Germany is going to get involved in an additional round of talks – according to German media reports, the new German Chancellor wants to meet with the Russian president by the end of January. Prior to the possible meeting between Scholz and Putin, German Foreign Minister Analina Berbock visited Kiev and Moscow. Should we expect a change in Berlin’s pragmatic course towards Moscow? How should the West oppose the Russian ultimatums?

“We are not going to make concessions, and I assure you, Germany will not be a country that will make concessions to Russia,” MEP Michael Gahler, a member of the Foreign Affairs Committee from the Christian Democratic Union in Germany, told RFE / RL. He also answered questions related to Georgia.

German media wrote that German Chancellor Schultz might meet with President Putin in January. What’s the mood in German on that?
I think what has been seen is that we, both in the EU and NATO framework, are all on the same page regarding Russia: to de-escalate, to refrain from any belligerent and violent steps, and to warn them that there will be an unprecedented amount of sanctions to be faced. The Russian troops are now almost two months there in the cold, and simply to let them go home – that’s what we all wish and what we all hope will happen. But it doesn’t seem that it will. So there is an urgent need to stand united and firm. On Tuesday, the foreign minister goes to Moscow to meet FM Lavrov. I hope she is well prepared, because he has that character Mr. Borrell experienced when he was there, and he will not be polite. But as it is so crystal clear who the aggressor in this field is, I’m pretty sure she’ll make her points in this dialogue that Russia has already heard unanimously.

Do we expect the new Chancellor to follow in his predecessor’s footsteps when it comes to the relationship and approach to Moscow?
We have a toughening of the Russian attitude, and the West as a whole is answering to that. I think there is a need to be clear and not to give the impression that there is anything legitimate in what they are demanding. We have an interest in discussing arms reduction, arms control, transparency, but there is no other possibility to make concessions and they will certainly not come from Germany. That is what I expect from the new Chancellor.

What can the EU do in this framework? We’ve seen High Commissioner Borrell travel to Ukraine. But then there was an impression the EU was sidelined from the three Brussels – NATO sessions and from the OSCE in Vienna. What is the EU able to contribute?
It’s good that for the first time ever, the High Representative visited the east of Ukraine. Mrs. Mogherini should have gone, but she did not. The EU policy is very clear: push back, constrain and engage. To answer the possible military aggression, we have real leverages in the area of economic sanctions. And we as a parliament have been outspoken, we have said- Swift must be switched off. And that will really have an enormous immediate effect. I think also what will have an immediate effect would be that we cancel globally all these tens of thousands of privileged permanent visas that certain people in Russia have in countries of the European Union, all these oligarchs and businessmen that are active and traveling back and forth on long term visas. Those visas need to be cancelled, they must feel it, and they must come to the conclusion that they should tell Putin that they are not happy with his policymaking. And they should tell him now before it all happens, so that this preventive effect gains ground. They should be concerned about their businesses, and know that if they side with Putin, they will lose with him.

And you think that would make Putin reconsider his plans?
He is a pioneer, but he has come to the end of his wisdom on how to handle his Russia for the future, because if you assess the real situation, he has the problem of a structurally weak industry, lack of innovation, with nothing but some military technology that you can only use for war and nothing else. They are by no means going anywhere. And Covid, too. You see how our stronger economies have suffered from the pandemic. In Russia, they tried to hide the real figures of how many died from Covid. Then Putin has to finance Lukashenko, he has to finance Crimea, Donbas, Luhansk, Abkhazia, South Ossetia, Transnistria and the war in Syria – they all put insurmountable costs on this weak economy, so he is clearly punching above his weight, something he doesn’t have the resources for, and that’s what makes him so dangerous. Because before he admits he’s on his knees, he would rather get aggressive and that is where we are at. We should not be afraid, but remain firm and steadfast.

So far, the European allies, including Germany, have been staunchly against lending military support to Ukraine. Would you say that that approach should change in light of what’s happening now?
Yes, and it should have changed already. According to Article 51 of the Charter of the United Nations, any country has the right to defend itself. And when there is a threat from outside, they have a right to have at least defensive weapons. So I would like to see the Ukrainian demand for anti-tank missiles granted. I mean, the Germans have the Milan, the Americans have the Javelin – I think there should be at least one Javelin or Milan available for every Russian tank that is waiting on the other side of the Ukrainian border, to help stop any invasion. Fortunately, the Ukrainian army is not that of the year 2014 any longer. They have built up far better capacities.

Yes, there are 100,000 Russian troops, I’m not so sure that [the Ukrainians] can stand against such an invasion if it happens. That is why I’m firmly in favor of supplying them with sufficient defensive weapons to make it very clear they will not let it happen, they will resist and Russia will pay a high price, aside from the economic sanctions and severe measures. Also, militarily, there will be many dead bodies returning to Russia, which I do not wish the Russian mothers to mourn.

One of Russia’s outstanding demands put forward before the talks was to stop the NATO eastward expansion. What was the rationale for the Kremlin to demand that, considering they already seem to have a de facto veto? Does Putin want to put it on paper as well?
Well, they will not get anything on paper. And I think they may even see the adverse effect. Ukraine and Georgia wanting to join NATO is nothing new, but it is now being discussed in Scandinavia, Sweden and Finland, who say that we should not apply given this Russian development, we are already cooperating closely.

I really wonder who advises Putin or whether he is resisting any advice he is given? I mean, before the attack on Crimea, and the Donbass, there was never a majority in Ukraine in favor of NATO membership. It is all a situation where I can only come to one conclusion – it’s not the weapons of NATO, it’s not the economic prosperity of the EU that is a danger to Putin. It is our way of organizing society in a democratic way. And I bet his biggest fear is that Ukraine, which is historically very close to Russia, could develop a strong economy, a stable democracy, the rule of law, and thereby, show the Russians that one can organize society in a different way. That is the danger that comes from NATO countries, not NATO weapons, but the way we organize society. And everybody knows that he knows it. We know it. And that is why there is no argument for us to allow him to set up a second Yalta. Those times are long gone.

What about Georgia and Ukraine? There has been some dismay since the Eastern Partnership Summit, because there was no European perspective mentioned.
I understand the frustration, at least for the three countries who have association and free trade agreements, that there was no additional, formal perspective. But my point has always been to first do your homework. And I’m currently not unhappy about the developments in Moldova. I mean, apart from the blackmailing from Gazprom regarding gas supplies. With Georgia, I’m upset when I see how in the light of the Russian aggression, there are still political battles between the President and his predecessor. It is not the time for domestic struggles- they must stand united against this existential threat. The fact that we had Charles Michel three times in Georgia. I mean, that is not something that happens. And we are disappointed. And this disappointment has several addresses. It’s primarily the government, because they apparently think they can ignore warnings and good advice. But also, the opposition is not being particularly constructive mood either. The only one who profits from that and who is happy is again Putin. So I really can only appeal to all Georgian stakeholders, please do your homework and see your real interest and the long-term perspective for your country.

At the 2008 Bucharest Summit, Georgia was a poster child of the EU, Ukraine did not have any open warfare or annexation, yet we were denied a NATO MAP even then. Yours was among the skeptical countries. One could argue this hasn’t changed over the years, only worsened. What would it take to see a shift toward a more positive approach?
It’s not a secret. It was Germany and France. If, in 2008, we had taken the two countries in, perhaps it would have at first caused some outcry in Moscow, but not the reaction we’re seeing now. We would probably be in a different situation now, but we are where we are. The general point is always that when NATO enlarges, it must be at the will of the acceding country. I mean, we don’t force anybody into NATO, nor into the EU. That’s the difference with Russia. And, of course, it must add to our security. But then we see this situation, and the Russians are not lining up at the borders of the Baltic states, because they are in NATO. It is sad, under these circumstances, to have such discussions. I would have wished that inside Russia itself, there would be the beginnings of the necessary change. It will come, probably not with Putin, at least while he is rich and alive in the Kremlin. He knows he will not leave the Kremlin both rich or alive, so that is why he conducts these policies. But I think it has already caused a rethinking in the West and it is not in the direction of appeasement.

Interview by Vazha Tavberidze for RFE/RL