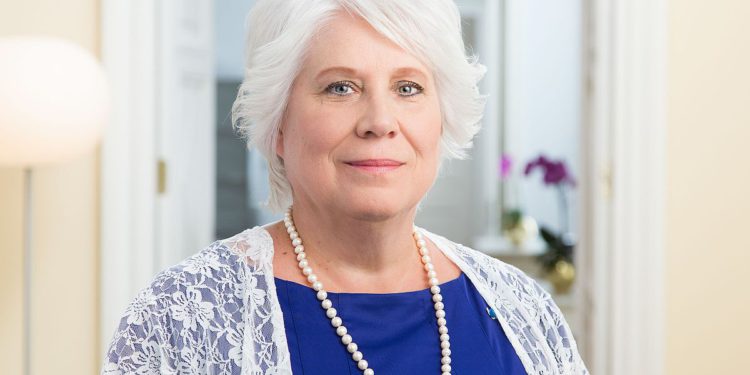 Two weeks ago, at an Euractiv conference, Estonian MEP and former FM Marina Kaljurand divulged some open secrets – namely, that Georgia’s EU 2024 bid is unrealistic. She also underlined the need to curtail Georgian ambitions and prevent false expectations when it comes to EU membership for the near future. Needless to say, her remarks sparked quite a debate back here in Tbilisi. In an exclusive interview with the Georgian Institute for Security Policy, she elaborated at length on her stance, why it might be a bitter but necessary pill to swallow, and what Georgia needs to go from stage “unrealistic” to “achievable”.

“As an individual, I’m a very strong supporter of the open doors policy,” she says. “I come from Estonia. We were lucky to decide our future, to be able to become members of the EU. I give absolute full support to all the Georgian aspirations, for its right to choose which organizations it wants to belong to, to have the right to apply. But then there is another perspective for me, which is not dictated by emotions and goodwill. In the European Parliament, and in the EU, I can see the present reality: that EU is not ready for enlargement among the Eastern Partnership countries. There are many reasons for that. One is that some member states, mainly Western European member states, think that the enlargement of 2004 was too much for the EU, that we had not yet been able to absorb that enlargement when another happened with the joining of Romania and Bulgaria. I think to some extent, there is also some fatigue with the Eastern Partnership, because what I hear here in Brussels is how come we have assisted for so many years since 91, almost for 30 years, and the countries are still in the process of reforming or democratic reforms? How come the Baltics did it in 10 years and these guys can’t do it in 30 years? These are the emotions are in Brussels. This is the reality. And in this reality, I think it’s important to be frank and open. I am saying that there is a very slim chance that Georgia will get accepted in three years, and I think the Georgian people deserve to hear it openly, because the EU is not exactly renowned for clear answers; it’s sometimes difficult to understand what the EU bureaucracy means. In Estonia’s case, we were assisted by Fins and Swedes, who were telling us what the EU means when it says something. Now Georgia is being assisted by the Baltic countries, Poland and so on. The EU is not ready to repeat the European perspective for Eastern Partnership countries, something that was so clear six years ago.

“Enlargement is a hugely complex political decision that needs consensus. And I do not see that consensus in the EU. And that’s why I think Georgian people deserve to know the feelings in Brussels today. And as I said, though, my personal views are completely different.

The impression is that the Eastern Partnership is sliding down the EU agenda – what do you think has happened?

There are also questions like why are we dealing with Eastern Partnership today, when we have much more important questions for Europe, from migration, terrorism, climate, digital challenged, not to mention the pandemic? Somehow, I think there is not much knowledge about the region in the EU. There are 705 members of parliament, and I think that if I stopped any one in the corridor and asked what the capital of Georgia was, not many would be able to answer. And not many would be able to say, for example, which are the Eastern Partnership countries, or which are the countries of the South Caucasus. Unfortunately, that’s reality.

I see that I, as the chair, and a former foreign minister, and as a friend of Georgia and Eastern Partnership countries, it is my duty to bring it to the agenda. And I’d like to assure you that it will be on the agenda in the EU, no question about that.

The EU will continue its policy of non recognition of occupation of Georgia’s territories, but I’d like to be realistic about expectations. And I always advise Georgian politicians to manage the expectations of the people, not to push them too hard. If you remember the visa freedom for Georgia, you were ready much before your counterpart Ukraine, but, for political reasons, we all had to wait for Ukraine to catch up, and then you got your visa freedom. That’s the reality. You were ready. You did not get it, because there was no political consensus. And the same goes with memberships and all other political questions.

We in the Baltic countries are friends. We know Georgia. My advice is to talk more to those countries who are skeptical. Introduce your country, the policies of your country, your aspirations; raise awareness. When we were acceding to the EU and NATO, nobody wanted us there. Nobody. We wanted to join the club. And we had to do much more than let’s say Finland to join. Before joining, when we were asked to do three things, we did five; when we were asked to do it by Monday, we did by the Friday before. We were making all these reforms, not only for the sake of the EU, but for the sake of our own people, hoping that maybe one day there would be a window of opportunity. And we were lucky, we got our window. The window for the Georgian people will come at some point. I don’t know when, but it will come. And that means that Georgia has to continue with the reforms, not for the EU, but for its own people, and wait for the right political momentum once it comes. It should be 1000% ready to take advantage of that.

Reforms are all great to have, but there are also external factors at play. Chief among those is the “Kremlin factor.” How much of a role do you think it plays in EU decision-making when it comes to Georgia and Ukraine?

It plays a role, but I would say less so than five years ago. Relations between the EU and Russia are at the moment at their the worst since the end of the Cold War. But they are very frank and open. I think that the visit of President Borrell to Moscow, and the humiliating press conference after the visit made it very clear that we cannot be partners with Russia. When Lavrov was humiliating the EU’s values, principles, cooperation, it was to some extent eye-opening. It doesn’t mean that the EU is not going to have relations with Russia, we will and we will continue cooperating in fields we find mutually acceptable, but I think that today, Russia’s influence on decision making in the EU is smaller.

Of course, you shouldn’t forget it took us a couple of months to introduce sanctions against Lukashenko just because one or two countries stopped it. And we see the same when we discuss our foreign policy towards Russia. There are one or two countries who always reject the common position, and who want to have closer ties with Russia and so on. Despite that, I think that Russia has less influence on the EU today.

Besides our different political views, we’ve been able to introduce sanctions against Russia from 2014. And we’re still keeping them, seven years on. And it’s a big thing. Yes, I agree that sanctions should be better targeted, and they should be better targeted to those whom Putin is protecting, the circle around him, people who are supporting his regime, people who are working for his regime. It’s difficult, but I think the targeted sanctions against specific economic sectors are right. And targeted sanctions against specific personalities are also right, even if we do not get a result quickly.

You mentioned the need to raise awareness of Georgia in the West, to talk more with the skeptical countries, to convince them to see our perspective. What venues and channels do you think are available that have not yet been explored enough?

Well, I think Georgia is doing it pretty well. At least, I’ve never seen lobbies of any other country visiting Brussels as often as Georgians do. What I would suggest to charm the skeptics is to introduce Georgian culture. Coming from a small country myself, Estonia, I know it isn’t easy to represent a small country. I always had to start with what Estonia is, where Estonia is. So I know how difficult it is. But it’s doable.

What was your selling pitch for Estonia?

It depended on the audience. For me, one of the pieces was always Skype. Because Skype was invented by Estonia. So yes, we might be on the periphery of Europe, but we put the Skype sign there. You have to say something that creates interest, that they can relate to, and then you can go into the details. But you have to be prepared, as it depends who the audience is. In talking to Spanish or French diplomats or MPs, for example, wine would be a relatable topic. When I organized the Arvo Pard concert in Washington, DC, I would argue that Mr Pard won more hearts for Estonia in 15 minutes than diplomacy did in 10 years. So you have to be smart. Georgia is a small nation like we are, so it has to find its own pearls. Who is your Bono? You need to find one and use it as a calling card.

In May, there was the trilateral signing by Ukraine, Moldova, and Georgia on creating the TRIO group, which will be tasked with promoting the three countries in the EU and the NATO. What do you think about this initiative?

I think it’s a very good idea. And it’s not only to promote the three countries, but also to encourage and promote better cooperation among the three. It’s what Estonia, Latvia, Lithuania, did. We’re always competing with each other but it’s a friendly competition. We are much stronger as a region, as a united force. So, I’m a strong supporter of regional cooperation.

The three coming three together makes a stronger voice than one country. And that’s also my advice to Georgia. It’s a good thing to do, to cooperate in all the fields where it finds it useful to work together to advance common European aspirations.

Interview by Vazha Tavberidze for GISP