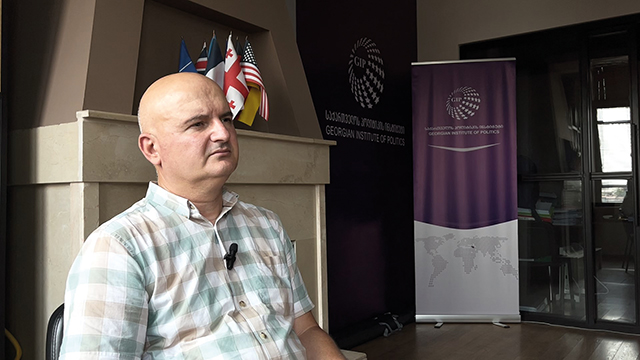 I would say the past six months were crucial for Georgian politics, especially in terms of foreign policy and the Europeanization of Georgia, because of the decision of the European Council to grant Georgia a European perspective but Ukraine and Moldova Candidate Status made many Georgians unhappy, -Kornely Kakachia, Director of the Georgian Institute of Politics, tells GEORGIA TODAY.

“Still, I think this was life-changing for the country because at least now we know the country has a geopolitical compass, but, of course, a lot of problems remain, including internal polarization, the radicalization of Georgian politics, and that’s why what we need to do right now, primarily political actors, is to fulfil this 12-point recommendation the European Union offered to fulfil the dream of the Georgian people.”

Do you believe we will manage to meet those goals?
I don’t believe it can be done in as short a term as the Georgian government believes. Georgia is currently expected to deliver this next year, but I don’t think it will. I believe the parliamentary election in 2024 will be very decisive, though. If Georgia manages to administer this election properly and it is held democratically, maybe after the election, we might get some results regarding the EU’s decision. But, as far as these 12 points go, it’s not easy to fulfil because both the government and the opposition are reluctant to engage in honest dialogue. The ruling party are afraid that if they meet these 12 points, they will lose power in two years, while the opposition believes that if they engage in genuine dialogue with the government, it may strengthen their position before the election, seeing them winning the elections for a fourth time. So, that’s why both sides are very reluctant to engage in issues like polarization, deoligarchization and other issues which the European Union highlighted.

Do you see the growing inflow of Russian tourists as a threat to Georgia’s security, economy and so on?
I think many people believe that this may cause some problems for Georgia. I don’t have evidence-based facts to say whether it’s bad or good for Georgia, but what we need and, especially from the governmental structure, is a SWOT analysis: What are the threats this kind of inflow brings to Georgian security? Then, based on this analysis, there should be a decision made. There is definitely a need to change the policy, maybe to a stricter regime, like in our neighboring countries. Some of them allow Russian tourists to stay there for 90 days and are not as liberal as we are in Georgia. We may also need to recalculate our interests based on our security needs.

What’s the name of the game ex-President Mikheil Saakashvili is playing right now?
I don’t think anybody knows what the rationale behind it is. His lawyers probably advised him that he needs to act according to his personal interests, and I think he sees this as a good strategy to avoid the Georgian court system, which I don’t think will be guaranteed. As we already know from the Georgian government’s reaction, they don’t buy this argument, and they are not ready, at least at this moment, to fulfil his promises. In reality, we don’t know whether he will leave Georgian politics, which he promised many times before; not to interfere in Georgian politics, even saying that he left his political party. Still, he remains the shadow leader in the UNM. It isn’t easy right now to say what his future will be. Still, if he manages to return to Ukraine, maybe, at some point, he will not get involved anymore. However, understanding that he’s still a Georgian politician, I think it will be very difficult for him to stay away from our politics.
In a few words, please, explain to us what the term “oligarch” means.

GD are afraid that if they meet the EU 12 points, they will lose power in two years, while the opposition believes that if they engage in genuine dialogue with GD, it will strengthen their position before the election

When we talk about the oligarchs in the post-Soviet space, in countries like Ukraine, Moldova and Georgia, we mean people who have an invested interest in politics, and their influence falls not only on the economy but also on politics. They control the executive branch, sometimes legislative and court systems. This was the case in Moldova, and this is the case in Georgia, while in Ukraine, the situation is a little bit different because there you have several dozen oligarchs, and they can balance each other out, while we have only one, and there’s nobody who can challenge him.

Is Mr Bidzina Ivanishvili really an oligarch?
Yes, definitely. He’s an oligarch in many respects. Everybody agrees, and you don’t need to be a scientist to see it. He enjoys a monopolized position in Georgian politics, and I think that’s precisely how we understand the rule of oligarchy in Georgia.

Will the EU consider this point fulfilled if the new law of deoligarchization is not applied to Ivanishvili?
I don’t think so. It’s a consensus decision that should be made by the government and the opposition on what this new law means and how it can be applied to anybody, including Ivanishvili.

Why does the US never name Mr Ivanishvili as a shadow ruler but considers it necessary to send its official to him to discuss the country’s critical issues? Here, I refer to Ambassador Kelly Degnan’s visit to him in March.
There was probably an attempt to exchange views about the future and trajectory of the country. I think that was perhaps one of the drivers why ambassadors, including the US and some other countries’ ambassadors, also met him, because they know that he’s the one who can influence the government’s decisions. This is no secret to anybody.

I think the understanding is that Georgia’s situation was not so grave a few years ago; frankly, Georgia was a frontrunner in reforms in the Eastern Partnership. It was also doing quite well in different indexes. But it started backsliding in the last two to three years. It’s already clear that the Georgian Dream party doesn’t want to give up power. They’re holding tight to their grip on power, and I think the West now needs to react, because they don’t want to irritate Ivanishvili and also to push the Georgian government or influence them because there’s some understanding in the West, not only in the US, but among European countries, that if you press the Georgian government too much, they may be prompted to change the geopolitical choice of Georgia or even change the trajectory of Georgian foreign policy.

The new political year is about to begin. What are your predictions as an expert?
I think the next few months will be crucial for Georgia because, as I mentioned, Georgia needs to fulfil these twelve points which were set up by the European Union, and if it manages to do so, then the country may have a future, and Georgia may get candidacy status, which is very important for many reasons, both geopolitically and internally. Still, if we do not manage, and the political crisis is protracted, Georgian politics may find itself again in turmoil, and we will not see any breakthrough until 2024.

The next few months will be crucial for Georgia

A second thing influencing Georgia’s situation is the outcome of the Ukrainian war. If Russia loses this war, then it will impact Georgia, and if Russia wins, it will have significant implications for Georgia and its internal politics. So, we have to see how this war ends and how Georgia’s political class will manage to fulfil the 12 points the European Union gave them.