Kelly Degnan: We Monitor Very Carefully for Any Attempts at Sanctions Evasion, and We Will Continue to Do So 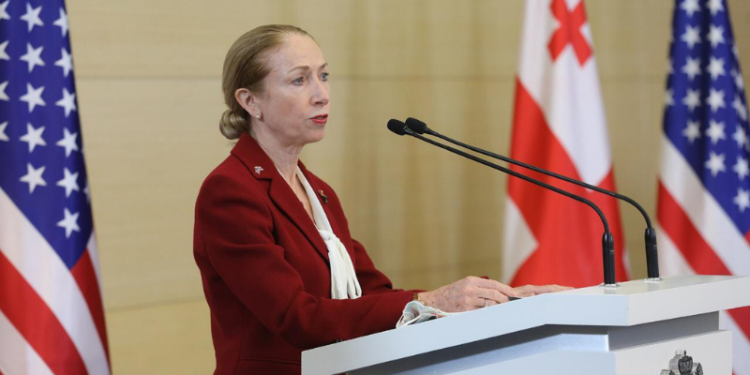 US Ambassador to Georgia Kelly Degnan responded to a question about the ship with sanctioned cargo in Batumi, noting they are looking into the issue.

“We are certainly studying this issue. This is very concerning, and we are tracking this kind of activity everywhere. We are working with the government agencies, Customs and Revenue Service, the Ministry (of Economy). We have had very good cooperation on following up on reports like this. It is very important, and I know the government takes it seriously that we monitor very carefully for any attempts at sanctions evasion, and we will continue to do so,” noted Degnan.

Revenue Service of the Ministry of Finance of Georgia says a Turkish-flagged ship loaded with Russian oil is leaving the port of Batumi, which it entered on June 26 this year.

“During the inspection provided by the law, it was found that neither the ship nor its owner were included in the list of internationally sanctioned. Accordingly, the ship was allowed to enter the Georgian port, which was clarified by the Maritime Transport Agency.

“Due to the above, the cargo was unloaded and further customs procedures were carried out. At the moment, a Turkish-flagged ship is leaving the port of Batumi with cargo,” the statement said.

Prior to the announcement of the Revenue Service, the Minister of Economy and Sustainable Development of Georgia, Levan Davitashvili, spoke about the ship, saying that the ship could not pass the customs control of Georgia.

The information about the ship entering the cargo of a sanctioned company in Batumi was initially spread by Mtavari Arkhi.

Sanctions imposed by the West on Russia after the attack on Ukraine also affected Russian oil and oil products.