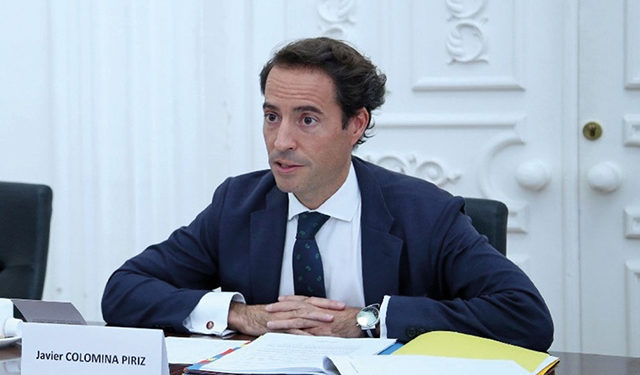 Talking to Vazha Tavberidze about the security issues in the region, NATO’s collective response to Russia and the so-called Rasmussen approach of getting Georgia into the alliance, Colomina says he plans to visit Georgia before the Madrid summit.

There was a statement made during the OSCE & Russia talks that was particularly evocative – the Polish co-chair said “this is the closest we’ve been to a war with Russia for the last 30 years”. Is this feeling shared at NATO?
It’s a difficult question to answer. The situation is a serious one, that’s for sure. The Russian military buildup has not stopped, and therefore the risk of conflict remains. At the same time, and whenever we’ve talked about that the Secretary General has been extremely clear, we are doing our utmost to work on the diplomatic path: we have offered paths of consultation to the Russians, we provided a set of specific proposals that we believe can be a basis for dialogue, but not the ones they proposed us, which are basically unacceptable. We have been working on all the things that we believe can be a basis for a dialogue and a process related with transparency and risk reduction measures, with non-proliferation, with the communication between NATO and Russia, which is right now completely stalled. We really believe that it’s time for diplomacy, we really believe there is still time for dialogue, but we need, of course, to continue work on our defense and deterrence. And it is needed due to Russia’s actions. We will convey that message as much as we need, and hopefully the Russians will stay engaged on this diplomatic path.

Russia has made it equally clear that they’re not interested in that kind of dialogue, and they’ve offered their own ultimatums which, as you said, are unacceptable to you. So where does it leave us?
Well, it leaves us in a difficult situation, to be honest. We are working and hoping for the best, but we need to prepare for any contingency. We know they have offered a few things that were mostly unacceptable. And we told them so, that we won’t compromise on our basic principles; we won’t compromise on the rights of any nation to design, freely, its own path and its own security arrangements.

We will, of course, support the territorial integrity and the sovereignty of Ukraine and Georgia. Our hope, my personal hope, as a special representative and as a diplomat, is that they will really follow the diplomatic path.

A consensus is needed to admit Ukraine and Georgia, but there are skeptics to that idea in NATO. As a special representative for the South Caucasus, what would need to change for that consensus to be reached?
Georgia is a very valued partner. All the tools that we offer our partners are in place, and we’re working very well with Georgia, both in practical cooperation and in terms of political dialogue. We are very engaged, and I think most of the things we need to see are there. But, of course, there are a few things that are not, and we’ve been conveying that to the Georgian side in terms of the reforms that we need to see, the domestic political situation, the extremes between the different parties is something that we don’t like to see, of course, and we’ve been quite clear about that. That is among the concerns of those within the alliance that might have a different view on an open door for Georgia.

Is the biggest obstacle in the path of Georgia that it needs to implement reforms and to improve the domestic political climate in the country?
Yes, probably. What I said to the Georgians is that they need to be prepared for whenever the time comes. We know that right now is not the time for a breakthrough in the open-door policy. And I know the Georgian authorities know that, but they still need to be prepared, to fulfill all the reforms that are needed- in electoral reform, judicial reform, security, etc. I know that the Georgians are doing a good job, but in some aspects, that job could be improved. And we need to see those reforms coming along. 2021 wasn’t the best year in that sense. We saw a few things, such as the withdrawal from the April agreement with the European Union, which can be read as messages that are confusing to the allies. I had to do some talking here to explain the situation.

If there wasn’t a Russian factor, would Georgia be a member already?
The decisions on the open door policy are taken by the 30 allies and by partners wanting to become part of the Alliance, no third party has a veto on those decisions. Russia doesn’t have any influence. Does the situation in the world geopolitics have an influence? Of course it does- on everything that is happening in the world. We’ve been very clear: accession is a matter that will be decided by the 30 allies. And by Georgia in this case.

What about the territorial conflicts in Ukraine and Georgia? Do they impact the decision making in the Alliance?
We have also been very clear about the territories occupied by Russia, and in my view, there is an absolute consensus by the allies that we support their sovereignty and territorial integrity, and we have asked on repeated occasions for the withdrawal of Russian troops in countries where they are not welcomed. We believe that Georgia should continue on its Euro-Atlantic path and whenever Georgia is ready to access NATO, it will do so, although I don’t think there is a possibility to integrate just one part of Georgia. We believe that the territorial integrity of Georgia is a fundamental principle. And therefore we will press the Russians to withdraw their troops and at the same time, continue to work as we are doing towards Georgia’s accession.

The former Sec Gen floated the idea of admitting Georgia without some of its territories. And you commented on that in the past, saying “it’s not very helpful in the current circumstances.” How so?
I think we have to stick to the principles we have defended all along. One of those is the territorial integrity and sovereignty of Georgia. We wouldn’t be doing a favor to the Georgians, in my opinion, if we accepted a sort of extension of a part of Georgia and moratorium on the territories that are occupied. I think we have to put the pressure where it has to be put, and that’s on the Russian side. They know they have to withdraw their troops from the occupied territories. And we know that that’s actually the path for Georgia to regain control of its own sovereignty. That’s what we all want.

How would you describe the current condition of the Georgia military, especially from the perspective of whether it lives up to NATO standards?
In most aspects, the relationship and the level of Georgian troops is optimal. It’s not for every partner to be able to have 800 troops in a NATO operation without any trouble. We are having a NATO exercise in March. NATO and partners exercising within the partnership is not something that we do with every partner; it is something that we do very specifically with the partners that we believe are actually trained at the level to exercise with NATO directly. This alone is proof of how excellent the relationship is. I said before that I was planning a visit to Georgia at some point before the summit, and I will try to do so in the framework of the exercise.