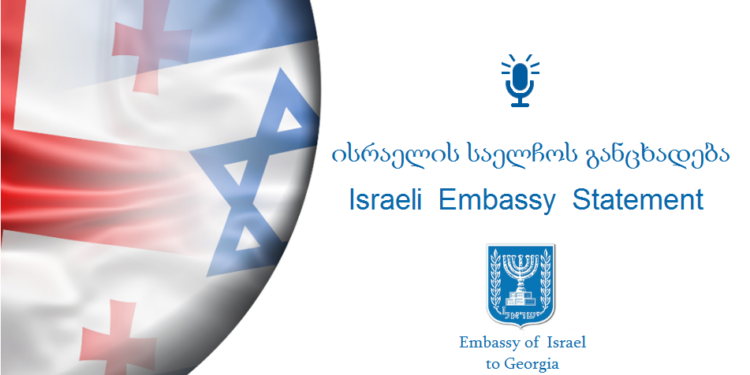 Israel rejects the decision of the International Criminal Court (ICC) on jurisdiction in the Palestinian case.

The Embassy of Israel to Georgia states:

“Israel is not a Party to the ICC and has not consented to its jurisdiction. Only sovereign States can delegate jurisdiction to the Court, and there is not, nor has there ever been, a Palestinian state.

“The Court in The Hague was established to confront mass atrocities that deeply shock the conscience of humanity; not to pursue democratic states with independent and effective legal systems. By this decision, the Court has unfortunately succumbed to politicization, violated its mandate and allowed itself to be dragged into a political conflict, making misguided determinations on issues over which it has no authority, and which the parties themselves have agreed must be resolved by direct negotiations.

“With this decision, the Court has not only gravely harmed its legitimacy, it has inevitably contributed to the polarization between the parties, distancing them further from the very dialogue that is so necessary to resolve the conflict between them. This, at a rare moment of opportunity for progress that has been created by the recent historic normalization agreements in the region, and the renewal of Israeli-Palestinian coordination. This unwarranted intervention by a foreign court effectively rewards the Palestinian refusal to return to negotiations, plays into the hands of extremists, and turns the Court into a tool of anti-Israel propaganda.

“The State of Israel is a democracy committed to the rule of law and international justice. Israel will take all necessary measures to protect its citizens and soldiers from this illegitimate decision by a Court that has proved itself today to be a political body, not a judicial institution.

“We call on all States who value the international legal system and seek to protect it from politicization, to oppose this decision and not cooperate with it.”

The International Criminal Court ruled on Friday that it has jurisdiction over war crimes or atrocities committed in the Palestinian Territories, paving the way for a criminal investigation, despite Israeli objections.

Judges said their decision was based on jurisdictional rules in its founding documents and does not imply any attempt to determine statehood or legal borders.

Israel, which is not a member of the court, has rejected its jurisdiction.