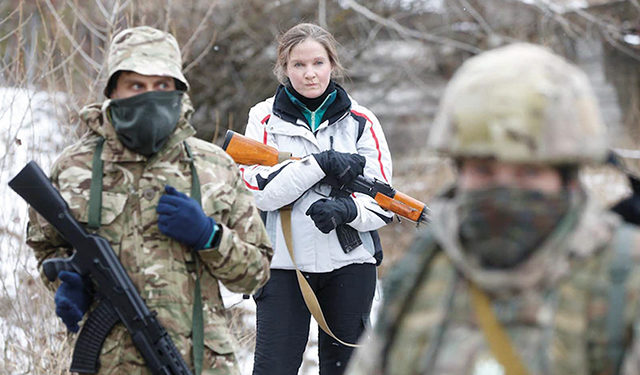 Civilian volunteers taking part in military exercises on the outskirts of Kyiv in Ukraine. By Valentyn Ogirenko/Reuters

Russia’s “special operation” in Ukraine has, literally and figuratively, become stuck in the mud. What was supposed to be a rapid assault, striking a spear into Kyiv within 48 hours, has now slowed to an arduous campaign. Forced to fight a taxing war against a determined defender, Russian forces have been forced to redevelop their strategy on the fly.

Faced with the looming prospect of battling a determined and now combat experienced insurgency, the Russian force is looking for any way to gain the upper hand. From potential recruitment of foreign mercenaries from Putin’s few friends, such as Bashar al-Assad, to the time-honored tradition of the Russian military pounding a city to dust, the stench of desperation is rising from the Kremlin. Like a cornered animal left with little to no prospect of survival, Putin is likely to lash out in a way unseen in most modern conflicts.

One matter is obvious: the Russian military is on borrowed time in Ukraine. Russia largely does not have the combined political, social, economic or military capital to maintain a prolonged campaign in the country. As is consistent with a litany of other military mantras, the concept that the irregular defender has all the time while the professional invader may have all the watches (read technology or troop numbers) rings true even here.

As a result, Ukraine is digging itself in for a prolonged resistance, something akin to the opposite of Russia’s infamous salami-slicing technique of gaining territory without overt force. By slowly grinding the invading force to a point that they are not materially, politically, or financially able to continue, the image of victory begins to look like a stalemate. At the same time, the unrest on the homefront will begin to chip away at the campaign from the rear.

These alternative routes to victory deserve their own examination. Firstly, the information war has largely been in the hands of Ukraine, with Russia only recently attempting to push into this sector. However, much of Ukraine’s dissemination of information has been outward to the world to garner support. While this has been highly successful, it is also a tool to be used against the Russians themselves.

Ukrainian President Volodymyr Zelensky took the first step in this arena by offering financial rewards to Russian troops who surrendered. To complement this, a large virtual bombardment via mobile, social media, and print about the futility of their mission can have an immense effect on what is reportedly fragile Russian morale.

The second phase of this tactic, aimed at the Russian public and social or political elites, would slow or halt the Kremlin propaganda machine. Platforms such as VKontakte, essentially a Russian Facebook, can be infiltrated and used to bring the reality of their military’s actions to the people behind the force.

Finally, as the elites begin to question Putin’s actions and loyalty to the betterment of the Russian state, the popular foundation he stands on can start to give way.

There is an old military adage that states the moral material of an offensive force is far more important to their success than their physical attributes. Striking at the hearts and minds of the attacker is something Ukraine, with the support of NATO and the West, should prioritize alongside their aggressive physical resistance.

Moving into the future, there lies the inevitable horror that is already lurking in the dark for Russia: insurgency. As NATO found out in Iraq and Afghanistan, these are impossibly immense issues that large modern armies are virtually powerless to halt outright. Russia is already experiencing the early stages of these attacks, visible in the ambushes, asymmetric and irregular force buildup, and underground supply networks being implemented.

What makes Ukraine an even better petri dish for the growth of this resistance movement is that it has the ideal factors for an insurgency to flourish. Just as Iran, Syria, and others sent fighters and materials into Iraq to assist in combating NATO forces, Ukraine has the same external support structure. NATO, bordering Ukraine itself, already has the means and motive to ship arms, technology, and even facilitate volunteer fighters into the nation. Whether it is done overtly or covertly, it will fuel a forever resistance the Kremlin’s generals can never hope to win.

Nations in the past have tried to close off outside support as a component of their counterinsurgency efforts. The Americans in Vietnam, the United Kingdom in Northern Ireland, NATO in Afghanistan, have all been forced to chase proverbial ghosts supplying the resisting forces. It is highly doubtful that, even in the event of a Russian military victory, they will have the stomach to confront NATO at the Ukrainian borderlands.

The failure of Russian tactical agility, concerted strikes at morale, and deep rooted insurgent organizations, all combine to offer the invading forces little hope of the shining rays of victory and peace coming any time soon. While Russia still maintains a significant portion of its total armed forces, almost a third by some estimates, outside Ukraine it is unlikely that throwing more numbers into the fray will change what is already occurring.

With Zelensky playing with the idea of NATO exclusion, it may give Putin the energy needed to renew his push. In a recent statement, The Ukrainian leader said, “”We realized that Ukraine will not become a member of NATO. We understand this, we are adequate people.” This should come as an alarm for NATO and Western military leadership.

The West will need to stay the course, continuing their material support, if Ukraine is to employ its “life-support” system. It is not outside the realm of probability that Russia will continue to feed the conflict with more soldiers and equipment, thus fueling the flames further. Like the Irish Republican Army during The Troubles, a prolonged campaign aimed at all echelons of conflict can tire even the largest of adversaries.