How to Lift Our Political Ethics from the Nadir? 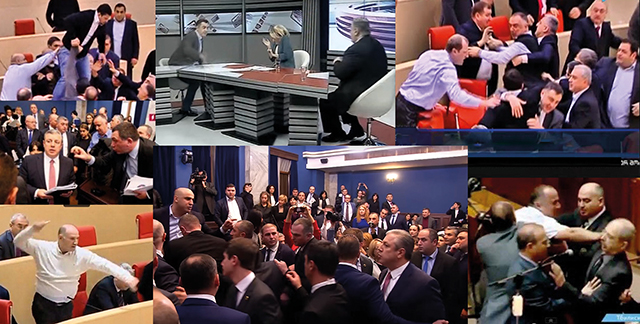 Nobody has ever asked if the use of dirty wit in the political arena makes any sense. It might, but only for self-satisfaction and to nourish the user’s sick complacency, nothing more. Obscene language brings no political dividends to its user, and here’s why: politics, as it is universally known, is an extremely serious profession that needs first to be mastered and then to be employed accordingly.

Yes, politicians are people, just like the rest of us, with all human senses and sentiments, sorrows and delights, but they serve a somewhat different cause that gives them a chance to hold power either directly or via special interest in having somebody else elected. As such, perhaps it is unfair to react negatively to the way either a ruling power or its opposition behaves publicly, the former trying to maintain its sweated-out authority and the latter attempting to grab it from them. Only their fist-fights and clashes keep the hot and viable political process up and going.

In our political reality, one of the most popular and practicable ways of fighting an opponent is the prolific use of libelous and offensive vocabulary, which is not a very rational way of politicking, because a discourteous polemical tone and uncivil manners have no way to achieve the final goal, and ultimate goal for a politician, which, as I said, is the fact of coming to power. This aim can only be achieved with the help of wise and stable logic, with the politician trying to show the electorate the prospect of a better life.

We, the kibitzers of that sinuous political process, might agonize over a politician’s obscenity because nobody likes to listen to those unprintable, filthy and indecent verbal expressions the Georgian politicians tend to use while addressing each other. Yet, what matters most in this presumably democratic process is merely this: The politician’s persuasive ability to make his convictions believable and his truth about a better future incontrovertible.

The opposition will never desist from talking and acting the way it thinks is most optimal for achieving power, and the ruling force should not be surprised by this. On the other hand, the opposition, for its part, must not shrug its shoulders at the government’s desire and work to maintain its extant position. They do not need at all to enter into rude and boorish diatribes against each other; instead, they should use a peaceful, balanced, scientifically justified, reserved and believable way in discussion, in other words, anything that helps them to win the hearts and minds of their constituency.

Uncouth, scandalous and insolent confrontation takes time and energy, and not only that – it destroys a politician’s image, speaking volumes about the level of his morality and mental ability.

The good and the comfort that we expect to come from the West have to find in Georgia a compatible model of behavior and way of life. Being proud of our ancient culture alone is not enough; to give only a cursory glance to Shota Rustveli and then brag about his genius being Georgian will not suffice. We have to follow both the spirit and letter of our exclusive culture, and make it so inclusive that our foreign friends show a desire to get involved deeply and wholeheartedly. Hearing from us on an everyday basis those nasty, vilifying, disgusting and often unfounded words addressed to one another might soon turn this culture and nation into a genuine pariah that nobody wants to identify with.