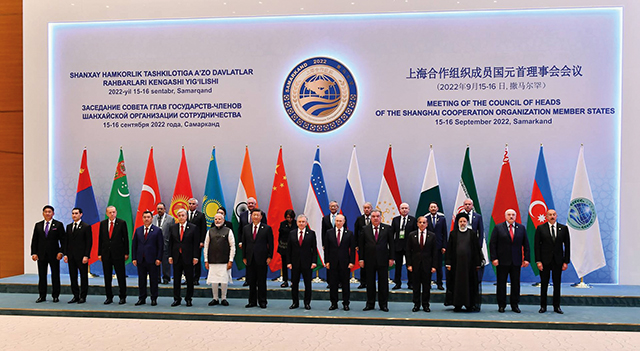 China has been active lately in Central Asia, the region which serves as a gateway for Beijing’s sprawling, though much-troubled, Belt and Road Initiative (BRI). The current moment is especially auspicious for China because Russia, its close but geopolitically inferior partner, is heavily preoccupied with its disastrous war in Ukraine.

The two Eurasian powers, it has been suggested, have an unofficial division of labor in the Central Asian states that lie between them, a consequence of their so-called authoritarian security community.

According to this understanding, Russia’s military superiority is largely uncontested, while China presses ahead in its quest for natural resources and trade growth with all five countries. The unstated deal allows both Russia and China to pursue bigger geopolitical ambitions without worrying about what the other is up to in their mutual backyard. This serves as a powerful glue. Animated by their opposition to the US, the two revisionist actors have preferred to downplay their differences.

Yet, increasingly, this arrangement seems to be falling apart. Badly weakened by its invasion of Ukraine, the Kremlin is simply too feeble to resist China’s widening presence. Xi’s people cannot do whatever they want, but they have greatly increased freedom of action.

As Russia’s fortunes seem increasingly volatile in Ukraine, President Vladimir Putin dearly needed a public appearance with Xi Jinping and preferably open Chinese support too. Xi did not voice any support for Russia’s actions, in stark contrast with his rhetoric in January, when the two proclaimed a partnership with no limits. This time, Putin had to reassure his colleague that: “We understand your questions and your concerns in this regard [Ukraine]”, a clear sign of earlier, presumably difficult conversations. (Putin had to make similar remarks to his Indian colleague).

Though for Russia the trip was mostly about China, for the latter the SCO summit was about advancing its ambitious agenda, which aims to cement its influence in Central Asia and the new opportunities that have emerged. Xi’s itinerary underlines this thinking and heightened Chinese expectations. Before the SCO meeting, he visited Kazakhstan, a key state in China’s BRI, and underlined China’s support for the country’s sovereignty against external threats. The official Chinese readout was particularly noteworthy in light of Kazakhstan’s difficult year. The unrest in early 2022, its quashing with the support of Russian troops, and subsequent questioning of Kazakhstan’s sovereignty, make the statement seem especially pointed.

This helps explain Kazakhstan’s emboldened policy toward Russia. Behind such confidence, there is surely pragmatism, but also the belief that China will serve as a counterbalance. The Russian aggression terrifies its Central Asian neighbors and pushes them to seek foreign policy alternatives to stave off potential future Russian adventurism.

China’s policies in Central Asia are channeled through the SCO, and are assessed on the basis of its own interests. For example, an agreement was signed in September with Kyrgyzstan and Uzbekistan on the construction of the regionally critical railway (CKU) connecting the three countries. Long-delayed, partially because of the revolutions and lack of finance from Kyrgyzstan, but also because of implicit Russian opposition, the project is now seemingly going ahead. The timing is notable; with transportation routes through Russia now hampered as a result of Western sanctions, China needs alternatives. The Middle Corridor seems attractive, but it needs infrastructure to make it work.

Russia had previously objected to a project on what it sees as its own turf. The fact that this fell away signals that it was simply unable to say no to China. China may have offered lukewarm support to the Kremlin’s war, but there is very clearly a price to pay. It’s fair to assume the rail project is a quid pro quo.
In its Central Asian push, China also signed $16bn worth of deals with Uzbekistan, dwarfing the $4.6bn agreements it made with Russia. Multi-billion deals were reached with Kazakhstan too.

Even in the security area, where Russia has been regarded as an uncontested power, cracks are emerging. Tajik-Kyrgyz hostilities undermined the Moscow-led Collective Security Treaty Organization (CSTO), of which both countries are members. To this should be added another slap to the Kremlin’s face when the Kyrgyz president canceled his country’s participation in the October 10 CSTO exercises. Sentiments in Kyrgyzstan are increasingly anti-Russian, as Tajikistan’s military activism is thought to be endorsed by the Kremlin.

Given the declining Central Asian faith in Russia, China can make economic and military inroads. For now, at least, Putin can only sit back and watch.