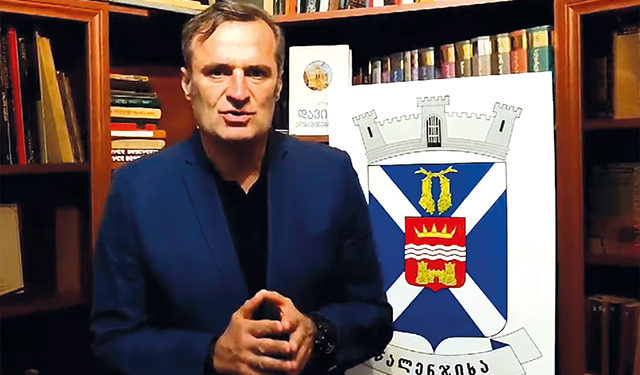 The United National Movement is celebrating electoral triumph in just one constituency in the entire country. Immeasurable exultation has followed; the celebrations are ubiquitous and overflowing, and they have already named the winning town “the land of the free.” The peaceful transition of power was finalized successfully, putting into place a new mayor who is proud to be the singular opposition winner of the mayoral elections in the nation, promising his electorate that he will turn his town from the epitome of a political conquest into the harbinger of prosperity in the region.

All this is happening in a little town in our beautiful Mingrelia, called Tsalenjikha. The place is truly beautiful. I visited it last summer and thought that the dwellers of this wonderful land deserve a lot better and more than they actually have. And now the UNM is there in the form of Mayor Giorgi Kharchilava, representing a party frustrated electorally, but still poised with enough revolutionary charge and vigor to pledge the rest of the country will soon see how their actions turn Tsalenjikha into an oasis flowing with milk and honey. If only!

The unlikely Tsalenjikha is now becoming an exemplary territory of radical social and economic changes, all with the blessings of the UNM’s revengeful enthusiasm, and the magic wand of businessmen-turned-politician, the famous Mamuka Khazaradze, founder of TBC Bank and now an elected member of the Georgian parliament. Having demonstratively surrendered his parliamentary mandate in protest at the “unfair” elections, he made a loud and curious declaration that he is to purchase a new abode in Tsalenjikha, move there, give a hand of friendship and assistance to the newly elected mayor, and to fight shoulder-to-shoulder with him to the immediate economic benefit of the region. Khazaradze is also trying to attract other businessmen to his innovative idea of pulling the depressed area out of poverty and hopelessness, suggesting that they move their accounts to Tsalenjikha and, consequently, leave part of the profit there for further economic development. Remarkably, his banker’s career has gone through many interesting vicissitudes in relations with the ruling parties of various times of the country’s recent history. He used to be and still is at certain odds with the UNM too, but now, as he says, it is time to stand together again in favor of the general good and national reconciliation. Nothing wrong about that!

The presumption is that, sometime in the near future, people will ask the question: What happened in Tsalenjikha? And this is where historic parallels emerge so vividly, as, a little less than a century ago, exactly the same question was asked, and became viral in the press, about another region of the selfsame Mingrelia, called Abasha. Abasha became a catchword for economic success in the soviet years. Those were the times of Eduard Shevardnadze, the prominent soviet statesman and Number One communist of Georgia. By soviet measures, the event was truly new and gigantic, and literally hundreds of newspaper and magazine features and interviews inundated the mass media. The exciting event? The first ever introduction of private enterprise in the Soviet Union after the Leninist New Economic Police (NEP) was abolished by Stalin, having admitted prior to it only the notorious collective farming. The peasants of Abasha were given land to cultivate without private ownership, leaving the entire crop to their own discretion, of course after having paid the taxes. The experiment became momentarily renowned in the soviet empire. Curiosity was worked up, but doubts were also persistent. The soviet power was afraid of nothing more than private ownership of property and land, and the authorities knew that its introduction could have a cancerous effect on communist ideology. And still, Georgia did it. And it worked to a certain extent, although the experiment never saw a time of great proliferation. Something got in the way. Something was wrong with the whole thing. Something did not live up to the expectations of those whose brilliant minds had conceived the idea.

I only wish for Georgia to prosper to the utmost. Let it start in Tsalenjikha if it must, although I am not a big supporter of the separatist development of the nation: I would rather see the entire country crank up the economic engine together so that we all feel the progress. Frankly, I have my own misgivings about the intended separatist success of the Tsalenjikha economic experiment, but, still, I wish them well!