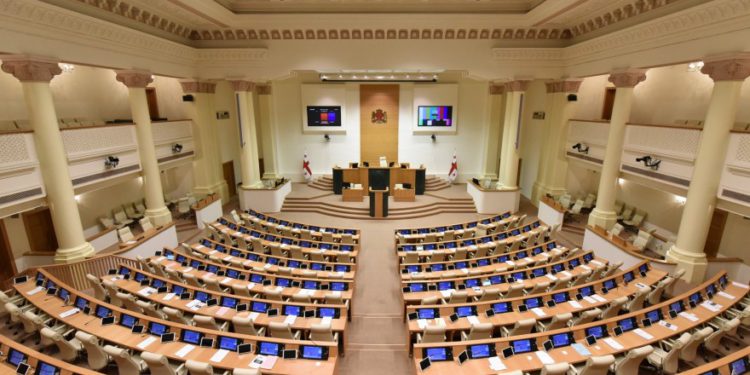 The legislative package, which abolishes the State Inspector’s Service, will be discussed in the first reading at the extraordinary sitting of the Parliament today.

Parliament will consider the amendments in an expedited manner, which means that the bill will be adopted in all three readings this week.

According to the project, instead of the State Inspector’s Service, two agencies will be established – the Special Investigation Service and the Personal Data Protection Service.

With the same amendments, several articles of the “Criminal Code” are added to the subordination of the investigative agency.

Georgia’s foreign partners have responded to the above decision, expressing concern regarding the planned abolishment of the State Inspector’s Service.

As acting Head of the EU Delegation Asunción Sánchez Ruiz told Interpressnews, the process initiated this week in the Georgian Parliament to adopt, in an expedited procedure, a law that will lead to the abolition of the current State Inspector’s Service bears high risks for Georgia’s democracy.

“Whereas there could be reason to legislate to improve the investigative and data protection functions currently vested in the State Inspector´s Service, such changes should be done in an open and transparent process, with a meaningful, broad debate, including civil society and the State Inspector´s Service itself. The State Inspector’s Service is Georgia’s independent mechanism for investigating ill-treatment and abuse of power committed by law enforcement officials and is thus a key institution for a well-functioning democracy and for the protection of human rights. The European Union was engaged in the creation of this Service and has invested substantial financial and human resources in its development. We are, therefore, very disappointed to see these actions, and regret the fact that it has not proved possible for EU representatives to engage with the Parliament on this matter,” stated the acting Head of the EU Delegation to Georgia.

“We appreciated the opportunity to meet with the committee chairs. We raised our concerns about the draft legislation pertaining to the State Inspector service, in particular provisions that would result in the dismissal of the entire staff of the State Inspector service. The committee chairs responded to our questions and I think they took on board our concerns, and I appreciate that,” Degnan noted.

German Ambassador Hubert Knirsch says it is difficult to understand why the project on State Inspector’s Service is being considered in an expedited manner.

According to Knirsch, State Inspector’s Service is an important element of Georgia’s government system. As the Ambassador notes, it is good when changes in institutional matters are made after careful consideration and only as many changes are made as it is needed.

Convicted former president of Georgia Mikheil Saakashvili believes the plans to abolish the State Inspector’s Service is related to the fact that the Agency has launched an investigation into torture and inhuman treatment used against him while he was being transferred to the Gldani Prison Hospital forcefully by law enforcers.

“The Office of the State Inspector is abolished due to the ongoing investigation into torture and inhuman treatment used against me.

“Also, because of the fact that the Inspector has not the edited footage, which was quite shocking to the world (but in their opinion it was the softest part) but the full version, which reflects much more brutal treatment.

“The expected conclusion of the State Inspector would provide a solid basis for my immediate release by the Strasbourg court,” Saakashvili’s stated.