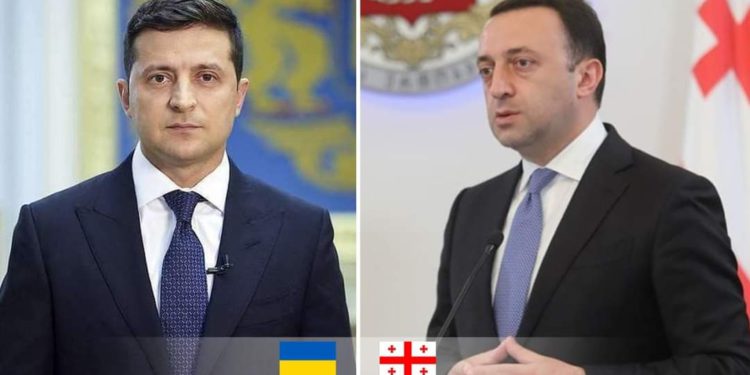 A phone conversation was held between Irakli Garibashvili, Prime Minister of Georgia and Volodymyr Zelensky, President of Ukraine with an initiative of the latter.

Zelensky expressed interest in the health of Mikheil Saakashvili, who is a citizen of Ukraine put under arrest in Georgia.

The government administration reports that as Garibashili noted during the phone conversation, “the condition of all prisoners, including Mikheil Saakashvili, is closely monitored at penitentiary institutions of Georgia and adequate medical services are rendered to inmates round the clock – 24/7.”

“According to the Head of Government of Georgia, Saakashvili is a citizen of Georgia, who is permitted to accept visitors. Lawyers, family members and members of the Parliament of Georgia (MPs) have been visiting him, and since admission to the penitentiary institution he has received over 100 visitors in total.

“President Zelensky touched upon the topic of Mikheil Saakashvili’s transfer to a prison hospital, upon which PM Garibashvili stated that the prisoner in question expressed resistance, along with verbal and physical abuse towards the staff and physicians of the facility. Accordingly, the administration of the penitentiary institution carried out measures promulgated in the law.

“During the conversation, the Head of Government of Georgia assessed the unlawful behavior of Mikheil Saakashvili as provocative, destructive and triggering threats for the stability of the country, thereby noting that citizens of Ukraine have no legitimate right to intervene in the domestic affairs of Georgia.

“The Prime Minister of Georgia also told the President of Ukraine that fugitive Saakashvili had entered the country by illegally crossing the sovereign border, when he was already convicted and charged for various grave crimes.

“Volodymyr Zelensky inquired whether a possibility could be considered for Ukrainian doctors to get permission to check the condition of Mikheil Saakashvili. In response, PM Garibashvili noted that prisoner Saakashvili is being taken care of by high-caliber healthcare professionals of Georgia,” reads the statement released by the government administration.