Georgia – Responding to a New Reality in the South Caucasus 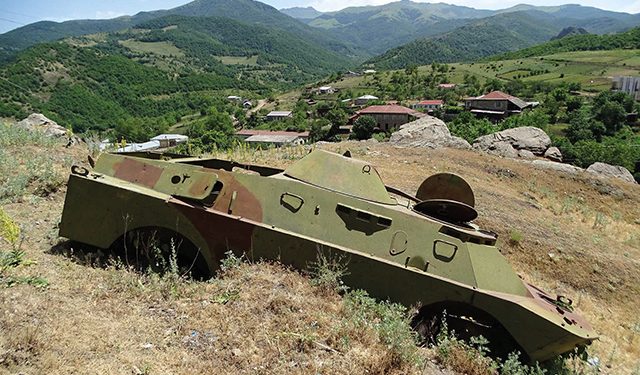 A destroyed military vehicle en route from Shushi to Karintak in Nagorno-Karabakh. By Adam Jones/Flickr.

Georgia, a West-aligned country, has often portrayed itself as the bastion of the remaining Western influence in the region. But the Second Nagorno-Karabakh War of 2020 revealed the lack of the regional security architecture when neither the collective West nor the OSCE’s Minsk Group (with Russia, France and the US as co-chairs) offered any viable solution to the conflict. This, much to Tbilisi’s chagrin, indicated the worsening geopolitical situation around Georgia with the West increasingly distancing itself from the region.

Though in the initial stage of the 2020 war, Russia remained passive, it eventually re-asserted itself. What remained unchanged was the sidelining of the collective West. For instance, Russia’s and Turkey’s plans to (re-)open trade routes which would increase the regional connectivity, potentially further sidelined the West’s role in the post-war settlement, which concerned not only the actual infrastructure projects. The West’s limited presence is also seen in the way the Western peacemaking standards and conflict resolution methods are being trumped by Russian illiberal alternatives. The sidelining of the West is also shown in the actual long-term political visions for the South Caucasus. Russia’s vision is versatile: a mixture of economic measures to keep Armenia and Azerbaijan closer, partly through military moves such as a physical presence on Armenian and Azerbaijani soil, and partly through fostering one-to-one bilateral ties, i.e. a transactional approach.

Turkey’s vision is similar, as is its pursuit of regional infrastructure development. Moreover, at the political level, the suggestion of creating a six-nation pact, often called the 3+3 platform, involving the South Caucasus states plus Russia, Turkey and Iran, could be seen as yet another example of growing Western political regress from the region.

What concretely disturbs political minds in Tbilisi is that after the war, Russia increased its military presence in the region by adding nearly 2000 peacekeepers in Nagorno-Karabakh – effectively establishing a new military outpost. Moscow now enjoys an unchallengeable military position in the region, with its bases in Armenia and in Georgia’s occupied regions of Abkhazia and Tskhinvali (South Ossetia). This allows Russia to establish direct military control (if it decides to) over the South Caucasus corridor, which includes critical pipeline and railroad infrastructure spanning from the Caspian to the Black Sea via the Georgian territory. For Tbilisi, this means that Russian troops are now essentially closing in on Georgia from all sides and could easily disrupt regional connectivity, the backbone of Georgia’s geopolitical importance to both China and the collective West.

Georgia’s political elites view the Russian peacekeeping force in Nagorno-Karabakh with much suspicion because of the country’s own experience of hosting Russian troops in the early 1990s. One of the conclusions is that Russian peacekeeping forces are a good tool for solidifying Moscow’s geopolitical positions in the neighborhood. Considering the unwillingness to withdraw from Abkhazia and South Ossetia, for Tbilisi, the Russian presence in Nagorno-Karabakh is more of a long-term perspective.

Tbilisi also understands that Russia will likely play a long game where, in order to persuade Azerbaijan to allow the Russian peacekeeping mission to remain on its soil beyond the end of 2025, it will use various tools such as incidents on the contact line in Nagorno-Karabakh. If this fails, a more concrete plan could be extensive supplies of military hardware to Armenia which will be used to build a battle-ready military capable of offensive operations, a useful tool for the Kremlin to secure its continued presence in the conflict zone. The context always differs, but similar developments were taking place in Abkhazia and South Ossetia in the 1990s and early 2000s. Instability provided Russia with perfect opportunities to interfere, and play a subtle game by increasing distrust between Tbilisi on the one hand and Sokhumi and Tskhinvali on the other.

Overall, Russia’s policies toward Georgia’s two regions have represented a building block in Russia’s emerging strategy since the early 1990s – namely, the use of conflict zones across the post-Soviet space in order to keep Moldova, Ukraine, and the South Caucasus away from NATO and the EU, often through the deliberate stoking of separatist conflicts. This policy has been successful so far, as the EU and NATO have refrained from extending membership to Georgia, Moldova, and Ukraine. In the Nagorno-Karabakh case, the West is largely absent, but Turkish influence has been on the rise, so Russia had to step in to keep Ankara at bay, and not let Baku gain control over its entire territory, as it would free Azerbaijan from Russian influence. Seen from this perspective, the Russian move to send its peacekeepers fits into the overall strategy of keeping its neighborhood from third countries.