The Embassy of Israel to Georgia released a statement noting that it regrets the fact that some of the words expressed by Ambassador Ran Gidor in yesterday’s TV interview were taken out of context and used for political ends.

“As the Ambassador clearly stressed during the show, Israel takes no sides in the current political crisis in Georgia. The Israeli Embassy joins the rest of the international community in hoping for a quick de-escalation and a mutually-acceptable compromise, based on a peaceful dialogue between all the relevant parties. 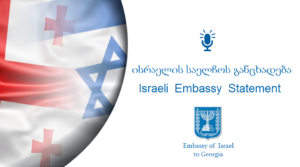 “Israel will continue to support Georgia on its path to prosperity and success,” reads the statement released by the Embassy.