Digital Networking for Multi-Functional Tactical Communications in the Georgian Army 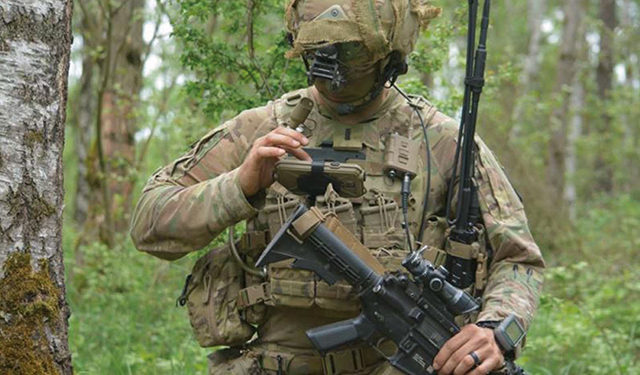 A US Army soldier uses the Nett Warrior end-user device to report information to his company commander in the field. Source: US Army photo/Spc. Joshua Cofield

The history of warfare is rife with examples of how communications mismanagement or miscommunication has caused complete disaster on the battlefield, regardless of their being superior forces. In the post-WWII era, the rapid development of tactical radios at the battalion and below level have cured many of these past woes. As the battlefield adopts some of the next generation of Command, Control, Computers, Communication, Intelligence, Surveillance, and Reconnaissance (C4ISR) technologies, the way our soldiers operate is changing rapidly.

The goal of these new systems is to remove much of the proverbial fog of war and increase total unit situational awareness, as well as to allow units operating in the initial phases of a conflict or in an expeditionary role to maintain effective C4ISR. In these early operations phases, many advanced connection nodes and systems may not have arrived, or may be disabled due to an electronic warfare attack.

The end-user system, often a commercial hardware platform such as a smartphone or small tablet, is linked to other units, command elements, vehicles, and UAS systems. The other linked elements are able to transmit real-time data about dangers and enemy positions, viewable by squad, platoon, and company level leadership, enhancing combat readiness. In United States Army tests, the link between armored vehicles and soldier end-user systems have shown to display “enemy” positions before the soldiers even exited the vehicle during their testing exercise.

To do this, the United States Department of Defense procured Samsung model smartphones, wiped the devices clean, and installed their proprietary software onto the devices before fielding them. The data has a multi-layered encryption but operates on a secure but unclassified network platform to enhance the speed at which the data is transferred. More advanced systems are being designed to include both unclassified and classified networks based on the type of data being sent.

In addition, due to the simplicity of use and that soldiers are already familiar with smartphone technology, the training and implementation timeframe is unusually short for such types of systems.

Some civilian versions of these apps are already available. Law enforcement, search and rescue teams, hunters and hikers, and even participants in shooting sports such as paintball and airsoft, have used these apps to great effect. They allow the user to navigate, drop “pins” to display various points of interest, and sometimes even communicate via in-app messaging capabilities.

For the Georgian Army, implementation of this type of system greatly accelerates the development of their C4ISR capabilities. This has routinely been an area of continual expansion and coordination with NATO’s existing systems. Georgia’s new line of UAS platforms promises a great advancement of ISR operability. However, much of the data gathered by these systems would only currently be available to senior commanders and their staff. That mission-essential information would then be parsed out and disseminated to lower level officers in the field, potentially allowing for a missed tactical opportunity.

With junior leadership, both officers and non-commissioned officers (NCOs), having access to this data is indispensable. Coupled with good military leadership skills and the encouragement for junior leadership to be proactive in exploiting tactical opportunities, the total technology framework allows for a vastly more effective force. Additionally, the near-future ability for this technology to be integrated into NATO’s existing technology systems makes Georgia’s ascension to the organization all that more promising.

During deployment, the new technology is able to operate offline sufficiently and effectively given Russia’s inclination for Electronic Warfare (EW). With any renewed invasion, the expectation for most mainstream military and communications to become disabled is natural. It will be of the utmost importance for leadership involved in the defense to communicate and share by-the-minute detailed information regarding enemy movements, breakthroughs, and withdrawals.

Further from Georgian territory, as the military moves abroad with their NATO counterparts, the need for expeditionary forces deployed in isolated areas to maintain the warfighting advantage in the C4ISR realm is crucial. In areas where military radio relay stations may be few and far between, the ability to utilize low and mid-level satellite, 4G and 5G, and other unconventional data transfer options overcomes the traditional obstacles faced by remotely deployed forces. Places like isolated areas of Africa, remote islands in the South Pacific, and parts of Central Asia are all locations where Georgian and NATO forces may find their C4ISR abilities stymied.

Connecting a disconnected battlefield has been a lofty goal for many decades, with attempts going back centuries. The misconception that weapons and munitions are what win wars is to enormously overlook the impact of effective C4ISR and its relevance in planning and execution of military operations. The addition of having small end user devices linked to even the most junior of combat leaders revolutionizes the face of small unit conflicts. With access to data that previously only brigade or battalion commanders would access, warfighters are empowered to operate successfully and reduce the propensity for human error and erroneous decision making processes.

The future of Georgian and NATO operations will require a far higher grade of operational precision and data sharing than any conflict seen before. From peacekeeping in Africa to so-called “small wars” in Asia, the need for small expeditionary teams to manage their tactical data and remain relevant in the information battlefield will be what decides the fate of the mission. Georgia’s implementation of this “ground up” perspective on battlefield data management and adoption of the next generation of C4ISR assets and systems will be what takes the nation’s defense forces into the future and ensures the country’s safety.