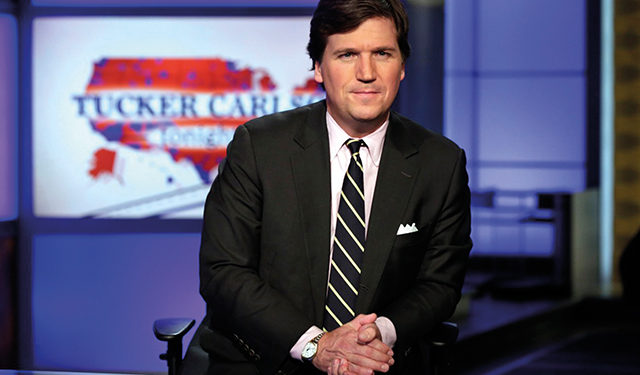 Fox News host Tucker Carlon, who compared the Southern border crisis to the border of Ukraine

For several weeks, the possible aggression by Russia toward the sovereign nation of Ukraine has been one of the most actively discussed topics in the panels of global affairs and international relations.

President Zelensky and the Ukrainian people have been in the global spotlight in messages of solidarity to prevent a devastating war and maintain peace at the very borders of NATO and the European Union.

Most politicians of the West, like Prime Minister Johnson, President of Poland, heads of state of the Baltics and others, became major supporters of Ukraine, checking Russia and warning its leader how destructive the possible war could be for not only Ukraine but even for Russian elites and common people. In this context, Secretary of State Antony Blinken eloquently mentioned during his press conference that “what really risks your security is a pointless war with your neighbors in Ukraine with all the costs that come with it”. The statement by Pentagon Press Secretary John Kirby about the rotation and extreme readiness of American soldiers in different United States bases was an eventual and probably very effective warning for Russia not to cross red lines.

But unexpected statements have been heard from the very characters of the American Republican Party to which the most proactive supporters of allies and partners of the United States are associated. One of the first was Fox News host Tucker Carlon, who spoke extremely out of context when he compared the Southern border crisis to the border of Ukraine, where an army of 100,000 Russian soldiers is still gathered. In that comparison, Tucker ironically declared that they (Democrats) suddenly care about borders.

In response, several GOP senators and leaders sent a message to Carlson and explained that “We’re the decision-makers on Ukraine, not you” which is formally true, but on the other hand, everybody knows about the influence Tucker possesses within the electorate of the Republican party, and that cannot be underestimated. For example, in one of his audio podcasts, famous activist Charles Kirk, after the 2020 elections, said that “Today Tucker is a Republican Party”, which very well describes the weight Carlson’s words could have.

Surprisingly, the rising star, Missouri representative in the Senate, Josh Hawley, called on the Biden Administration to drop support for Ukraine membership in NATO. His primary argument is that Ukraine’s NATO membership will make it problematic to strengthen US military forces against the rising threat of China in the Indo-Pacific. Yet, when Hawley is concentrating on China’s threats, he must also consider the strategic place on the globe of Ukraine and Georgia and also China’s rising ambitions to influence the whole of Europe. Couldn’t those countries very soon be possible partners even against the threats of China within the EU and in its neighborhood? The visit of Vice-President Mike Pence about the Anaklia Deep Seaport in Georgia in 2019 was part of US-Chinese rivalry for strategic infrastructure, which means Senator Hawley’s reference toward the Secretary of State may require reconsideration.

The supporters and ideologues of the Realist school spread the word against NATO eastern enlargement and, generally, much of the foreign entanglements too. As declared GOP supporters, their most common arguments against Ukraine are examples of Afghanistan and Iraq. In the recent podcast of The American Conservative under the name, Neocons are Back, those realists criticize so-called Neoconservatives who, by their explanation, say exactly the same things as about the Iraq War. But is that a real argument?

Shouldn’t the American Right pay more attention to the difference between people and regions, and properly estimate the loyalty of partners like Ukraine and Georgia? Or do they really want to tell us that we would be the same countries, with the same security and economy in case of 20 years of American military presence on our soil?

Or course, the answer is NO. There are Ukrainians who are ready for the bloody war against the rival without a single American soldier in that country. On the other hand, we have Afghanistan, where the people and government gave up power to the Taliban after decades of American presence and tons of dollars spent on Afghan security. And yes, some people around the globe perceive freedom and liberty as more valuable than many others, and I am sure Ukrainians are among the first.