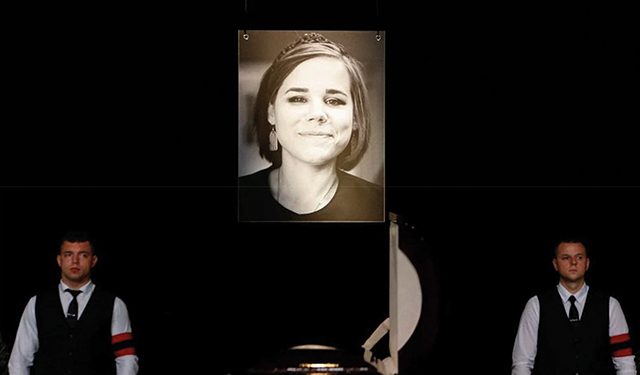 Honor guard members stand next to a coffin during a memorial service for Darya Dugina. Source: REUTERS/Maxim Shemetov

Despite attempts by international organizations, the maelstrom of war often claims the lives of anyone who gets involved. Aside from combatants, this includes civilians, aid workers, journalists, and political figures. Most modern armies abstain from targeting these groups outright.

While both Russia and to a lesser extent Ukraine have both been accused of wrongdoings in this area, one recent example shows an interesting facet of the war. The daughter of prominent Russian propagandist and political strategist Alexander Dugin, Daria Dugin, has made her own waves as a pro-Putin influencer, activist-journalist, and political operative. Writing first for Russian state-owned media outlet RT and later editor for notorious misinformation outlet United World International, owned by Wagner mercenary head Yevgeny Prigozhin, she has not been shy in her support of the “special military operation” in Ukraine.

On the evening of August 20, the Toyota Land Cruiser she was driving home in after the “Traditions” Russian culture and arts festival, exploded, killing her instantly. The subsequent investigation, headed by the Russian Federal Security Service, or infamous FSB, determined Ukraine was the culprit behind the attack. Their analysis of the lead-up to the attack pointed to a pair of Ukrainian nationals that had covertly entered and exited Russia.

The FSB stated that a woman had entered Russia from Estonia, lived in the same apartment building as Daria, and even attended the “Traditions” festival where Alexander was set to speak. Another male accomplice, also of Ukrainian nationality, assisted with forged documents, logistics, and even gave bomb-making supplies to the female assassin. According the FSB, the woman tailed Daria to and during her activities at the festival, attached a magnetic bomb to her car, and followed her home before remotely detonating the explosive.

While none of the official FSB narrative can be independently confirmed, as any other investigation is illegal, it sheds light on an interesting part of Ukraine’s special services. United States intelligence sources leaked to the New York Times that they believed Kyiv was indeed behind the attack. Additionally, after the attack, the spokesman for the Chief Directorate of Intelligence of the Ministry of Defense of Ukraine told The Washington Post that “I can say that the process of internal destruction of the ‘Russky Mir,’ or ‘the Russian world,’ has begun,” and said that “the Russian world will eat and devour itself from the inside.”

This introduces an interesting issue for Ukraine. If they were indeed behind the bombing, this could be seen as crossing a line between fighting Russia’s force for sovereignty and national survival, and state-sponsored assassinations of non-military individuals. The ramifications of the latter could be stinging, and frame the West as supporters of such activity by proxy, thus justifying much of the Kremlin’s narrative before and during the war.

On one hand, the attack could be seen as a massive overreach of Ukrainian offensive capability. The assassination of a non-military public figure is unlikely to win additional foreign support and have no tangible effect on the liberation of Ukrainian territory from Russian troops. As a result, this could become an unnecessary escalation of the situation with Moscow, similar to the bombing of the Crimean Bridge more recently.

Since Dugina is a civilian, unaffiliated with the Russian Armed Forces, her assassination would typically be outside the Law of Armed Conflict, and illegal. The only exceptions to this would be if her or her father were of some special status and taking some effective part in the conflict. It’s widely accepted that civilians are protected from attack, but under the International Committee of the Red Cross (ICRC), “civilians are protected against attack, unless and for such time as they take a direct part in hostilities.”

What constitutes “direct part” is somewhat complicated. The ICRC continues by saying that the following criteria must all be met in order for a civilian to be a legitimate target:
• The act must be likely to adversely affect the military operations or military capacity of a party to an armed conflict or, alternatively, to inflict death, injury, or destruction on persons or objects protected against direct attack (threshold of harm);
• There must be a direct causal link between the act and the harm likely to result either from that act, or from a coordinated military operation of which that act constitutes an integral part (direct causation); and
• The act must be specifically designed to directly cause the required threshold of harm in support of a party to the conflict and to the detriment of another (belligerent nexus).

However, Dugina has been described merely as a media figure and journalist, though at times a biased one and by Western sources as one rife with misinformation and propaganda. As seen in past conflicts, the ability of the media has been used to assist in committing atrocities. According to the “Final Report to the Prosecutor by the Committee Established to Review the NATO Bombing Campaign Against the Federal Republic of Yugoslavia,” the media can be either a target or protected.

The above report states in paragraph 47 that “whether the media constitutes a legitimate target group is a debatable issue. If the media is used to incite crimes, as in Rwanda, then it is a legitimate target. If it is merely disseminating propaganda to generate support for the war effort, it is not a legitimate target.” The ICRC agrees with this sentiment by outlining that “journalists are protected only as long as they do not take a direct part in the hostilities. News media, even when used for propaganda purposes, enjoy immunity from attacks, except when they are used for military purposes or to incite war crimes, genocide, or acts of violence.”

So the question is whether Dugina, or her father if he was the intended target, was within that legitimate target definition. Both she and her father were described as vehemently pro-Kremlin and pro-Russian Imperialist, and both were sanctioned by America and other nations. Despite this, they could not have been seen as directly involved in hostilities or taking part to spread atrocities, according to any evidence available.

On the other hand, Ukraine could easily say that her use of hateful and anti-Ukrainian propaganda served to bolster public trust in the war. It may also have made her a viable target, as the effects of her or her father’s removal would effect a win in the information war. However, others in the legal realm would be justified in saying that hatred and disinformation may not constitute a government-sanctioned assassination.

As a country fighting for its very survival, it’s difficult for one to blame Kyiv. Even if their tactics and methods to achieve the upper hand are somewhat questionable, some might surmise that it is reasonable in such dire circumstances. While it will likely be the victor in this war that decides if this case will be pursued in the international courts, it could open a legal precedent in future actions by both sides.