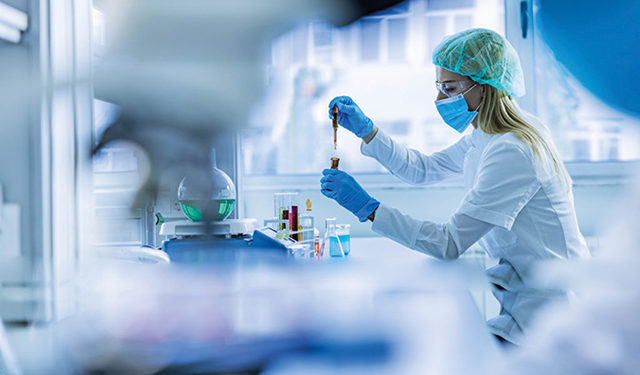 Young female chemist working with poisonous liquid in a laboratory.

Since the epidemiological situation has improved in some regions of Georgia, the government has decided to lift certain restrictions in February and in March, yet many others remain in place.
On January 22, the Interagency Coordination Council announced new decisions regarding the coronavirus-related restrictions countrywide.
Based on the decision of the Council:
• Municipal transport, schools, shops and trading facilities will be reopened in Batumi, Zugdidi, Poti, Gori and Telavi from February 1. On weekends, during February, there will be no transport, and food outlets and shops will continue in a take-away/delivery only regime;
• From February 1, outdoor eateries will be opened in Adjara, but the organization/celebration of weddings or other large parties will still be forbidden; Eateries in other regions will continue to operate in a take-away/delivery only regime;
• From February 1, shops and shopping centers will reopen in Tbilisi, Kutaisi and Rustavi;
• From February 1, all airlines will resume flights to all destinations, in compliance with regulations;
• Indoor and outdoor fairs will be able to open in all cities from February 15;
• From March 1, it is planned to restore schools and transport in Tbilisi, Kutaisi and Rustavi;
• From March 1, it is planned to open kindergartens and return students to universities and vocational schools, although the deadline may change;
• The night curfew remains in force until March 1, with movement prohibited from 21:00 to 05:00;
• All other restrictions remain in force, including restrictions in ski resorts;
• Intercity transport will remain limited to car and taxi;
• Face masks, queues, social distancing, etc. will still be mandatory for facilities that open.
Regarding the resumption of international flights from February, Minister of Economy and Sustainable Development Natia Turnava said that flights will be carried out in accordance with the rules of all medical protocols.
“Resumption of flights does not mean that from February 2 our skies will be filled with aircraft; it will take time,” the Minister noted, clarifying that procedures need to be followed and resumption of air traffic with countries where the infection rate is high will not be reintroduced immediately.
Vice Prime Minister Maia Tskitishvili further emphasized there are no plans to open ski resorts from February 1 due to the risk of high mobility, which will promote the rapid spread of infection.
Protests
The government’s latest decisions to keep certain restrictions in place led to protests from civilians, opposition politicians, and business sector representatives. Several protest rallies were held during the week, with protesters demanding the lifting of restrictions imposed during the pandemic.
Demonstrators noted that if the government does not do so, the protests will continue, because “these restrictions are destroying the country’s economy.”
In response, the Prime Minister stated that changes to the restrictions would be considered if the infection rate countrywide falls to 4% and stays there for seven consecutive days.
“When the community transfer rate will be 4% for seven consecutive days, we will be able to carefully and prudently reopen the economy. The current trend gives us grounds to be cautiously optimistic. That is why we need to start a discussion today on lifting the restrictions earlier if the trend is maintained for the coming week, as we managed to do last summer. It primarily applies to Tbilisi, Kutaisi and Rustavi. Reference is made here to education institutions to make sure that our children go to classes. It also relates to a gradual reopening of municipal transport, so that the achievements made as a result of our joint efforts in the last two months are not jeopardized. What is most important, we should do our best to maintain this achievement in a stable manner until we start a gradual reopening of the tourism sector. The economic team, led by Maya Tskitishvili, Deputy Prime Minister of Georgia, has been holding meetings with businesses for several days already to make sure that the reopening is sustainable, prudent and, most important, safeguarded,” the PM said.

Support for the business sector
On Wednesday, Economy Minister Natia Turnava announced that the government, as part of its measures to support Georgian businesses, will launch the Fitness Center Subsidy Scheme to provide relief to fitness center operators.
“In order to support fitness center operators, the government will subsidize interest rates for their loans. We also take into consideration that the fitness industry cannot be opened in February, which is why we will include it in the state program ‘Produce in Georgia,’ which is designed to help industries most in need to overcome financial difficulties arising from the suspension of their operations during the pandemic,” she said.
Produce in Georgia, implemented through a government initiative, aims to provide funds for and support businesses in the local production market.
Back in August, the government announced that Produce in Georgia would support six new economic activities in order to specifically tackle the economic hardships caused by the coronavirus pandemic.
The ban on fitness centers, intercity public transportation, swimming pools, as well as the restrictions in place for Georgia’s ski industry, have been kept in effect until further notice.

New Cases
Currently, the epidemiological situation in the country appears relatively stable. Georgia is recording 700-1000 new cases on average daily, with the capital, Tbilisi, still in the leading position in term of virus spread, followed by the Adjara and Imereti regions.
On Wednesday, Georgian Foreign Minister David Zalkaliani tested positive for coronavirus.
He wrote on Facebook that he “feels well and is undergoing treatment at home,” noting that he went into self-isolation after contact with an infected individual.
“After contact with the infected individual on January 23, I moved to self-isolation. The PCR test today confirmed today I have contracted Covid-19. I feel well at this point and hope to return to my usual way of life soon. Let us take care of each other and follow the recommendations of the Ministry of Health as much as possible to avoid risks,” he wrote.
This week, the death toll on a daily basis has decreased to a minimum 12 and maximum 25 fatalities.
Notably, the number of recoveries is relatively high, with at least 1000 cases daily.
At this point, there are approximately 6,920 active cases of coronavirus in the country.

Vaccination
Regarding the vaccine, health officials vow only WHO-authorized and highly trustworthy vaccines will be imported to Georgia at the end of February.
“We are expecting the vaccine to arrive at the end of February. We have already sent a request to all clinics and medical institutions to provide a detailed list of all their staff in order to properly plan the vaccination process,” stated Health Minister Ekaterine Tikaradze, adding that no vaccine will be imported into the country that will not have high trust status. She also noted that the vaccination of 60% of the population, as is planned, is sure to help increase economic activity.