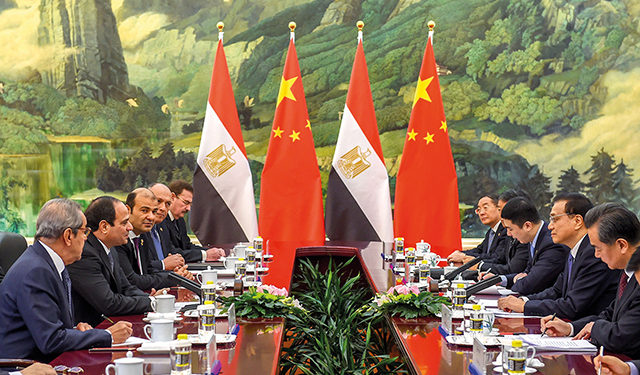 Leaders from China and Egypt conduct discussions during a meeting in the Great Hall of the People in Beijing, China in 2019. Photo by Greg Baker-Pool/Getty Images

There is much debate both within and without China over whether or not its economic interests in the region will force it to play a more active security/military role in the Middle East. In fact, recent political and economic trends in the region indicate that a shift in China’s approach to the Middle East along these lines has already started.

This is not an isolated case. China is also the UAE’s largest trading partner. More than 200,000 Chinese nationals reside in the UAE, and the Dubai Port is a vital global shipping and logistics hub for Chinese goods.

In the last decade, as Chinese fears have grown over the safe operation of sea lanes, the Red Sea, the Suez Canal, and the Bab al-Mandeb Strait have come under increased Chinese attention. The gaining of influence in and around geographical choke points for global trade and oil and gas shipment has become pivotal to Beijing’s foreign policy in western Eurasia.

No wonder Egypt features so strongly in China’s investment agenda. Billions of dollars have been invested by Beijing in Egypt. China is helping Egypt build a new administrative capital in the desert outside Cairo, as well as a Red Sea port and industrial zone in Ain Sukhna. Several high level trips were made by Egyptian officials to Beijing since 2014, compared to just two to the country’s traditional security partner, the US.

The growing connections between Middle Eastern states and China are sensitive for the West. The US’ evolving international position has led it to discard some of its responsibilities in Eurasia, which has had the effect of causing small countries to revisit their relationships with the US and consider the rising China.

Another interesting Middle Eastern partner for China is Iran. Tehran wishes to establish relationships with global powers to balance US pressure. Its growing partnership with Moscow fits this paradigm, as does its increasing closeness with Beijing.

Iran could prove much more important to China than other Middle East states. Its growing isolation from the West is likely to continue in the coming years, which will push it to work ever more closely with China. Iran’s strategic location and human resources, as well as its intention to serve as a civilizational center of gravity for neighboring states, could divert American military and economic capabilities away from the South China Sea, which would work in Beijing’s favor.

Iranian troops or their allies are operating in many countries around the Middle East, and the Iranian navy is active in the Persian Gulf and the Strait of Hormuz. All of this dilutes US power across the Eurasian continent. Moreover, Iran’s location can enable China’s Belt and Road Initiative to pervade the region, whether on land or sea (the Caspian and the Persian Gulf).

China publicly rejects any notion of its seeking military or security dominance in the Middle East. Beijing understands that it still lacks the knowledge, networks of contacts, and necessary authority (on a par with Western authority) to proclaim its geopolitical aims in the troublesome region. Despite this, westerners often take it for granted that China is in fact seeking domination in Eurasia. After all, why would the country want to spend billions and station hundreds of soldiers either in the Middle East or elsewhere in Eurasia?

There is a grand debate within China itself on whether Beijing’s economic interests in the Middle East could force it to become a more active security/military player in the region. Though there are hopes that this can be avoided, there are already signs pointing in this direction.

Beijing recently announced its intention to take part in anti-piracy initiatives in the Persian Gulf following incidents with oil tankers. With the US diminishing its presence in Eurasia overall, China will have to address the geopolitical vacuum. Spending billions will not solve every problem, but economic development of the region could forestall tensions for some time.

It is likely that China will have to increase its presence in Western Eurasia. Concrete steps have already been taken: Beijing opened a base in Djibouti and set up military installations on the border with Afghanistan and in Tajikistan.

As China grows its position in the region, it will need partners to manage inter-state conflicts. Russia is a likely choice, but the latter, like Turkey and Iran, will not be particularly interested in sharing military/security positions in the Middle East that were gained by waging war in Syria and working in concert to constrain the American position.

Overall, it can be argued that Beijing will continue to be extremely careful not to become too involved in the region. As far as China is concerned, Russia and the US can keep responsibility for security in the region. What is crucial for Beijing is multipolarity, and it will pursue that principle assiduously.
But as time goes on, China will find it increasingly difficult to stay above the fray in the Middle East. It will have to become more responsive to rising challenges to its businesses and sea and land trade routes.
This will inevitably lead to greater insecurity between the US and China. Top US officials have been warning about China’s efforts to gain influence in the Middle East, which could undermine defense cooperation between the US and its traditional regional allies in the region. The Middle East is thus transforming into yet another arena of competition between the US and China.