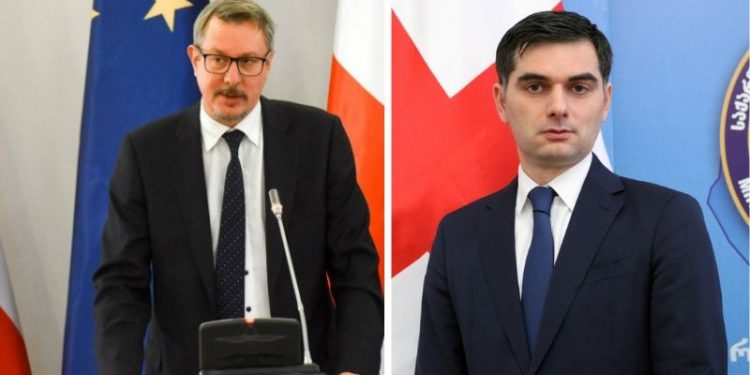 EU Ambassador to Georgia Carl Hartzell said that the Georgian Ambassador to the EU had been summoned to the EU headquarters in connection with the secret recordings. As Hartzell told reporters, the meeting took place in Brussels yesterday.

After scandalous files were spread on the internet this week, it became clear that the State Security Service has also been listening to foreign diplomats, including the EU Ambassador to Georgia.

At the same time, Hartzell notes that listening to diplomats contradicts the Vienna Convention and he “considers it unnatural from a partner like Georgia.”

“We take this very seriously because it raises questions. Diplomatic relations are defined by the Vienna Convention and we do not consider it natural that such a close friend and partner as Georgia is involved in such actions against us.

“For this reason, the Georgian ambassador to the EU was summoned to a meeting at the EU headquarters in Brussels yesterday in order to discuss the EU positions and take further steps,” Carl Hartzell said.

Hours after the EU Ambassador’s statement, the Foreign Ministry’s Press and Information Department stated that the Permanent Representative of Georgia to the European Union had already talked to the representatives of the organization regarding the leaked secret recordings and provided them with full information on the investigation.

“Georgia is committed to all the international obligations that ensure the full, smooth functioning of the diplomatic corps in the country and adheres to the principles of the Vienna Convention,” the Foreign Ministry’s Press and Information Department says.

“The Georgian Prosecutor’s Office is conducting active investigative and procedural actions regarding the secret recordings disseminated by the media. The Georgian Prosecutor’s Office also applied to the United States and other countries for legal assistance. Investigative actions are aimed at establishing the authenticity of the materials, their origin, etc. We are obliged to wait for the results of the investigation. In general, Georgia is committed to all international obligations, which provide for the full, smooth functioning of the diplomatic corps in the country and adhere to the principles of the Vienna Convention,” stated the Ministry of Foreign Affairs of Georgia.

Files containing covert surveillance and illegal eavesdropping were leaked to the internet last week. According to the materials, the state security officers illegally listened to clergy, journalists, politicians, and foreign diplomats. The Prosecutor’s Office has launched an investigation into the illegal wiretapping.