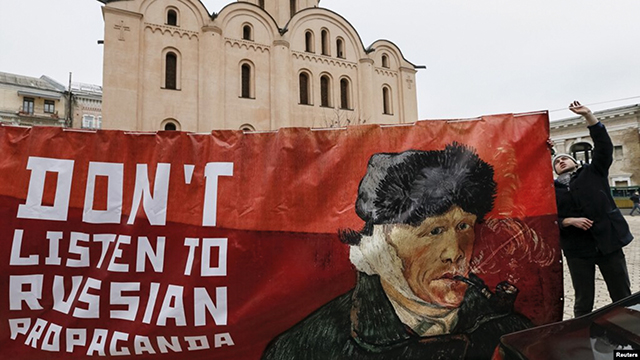 Propaganda is a powerful weapon of the Russian hybrid war. By influencing people’s emotions, it achieves on the one hand the neutralization of an active minority, and on the other mobilizes unconditional support around the ruling regime/leader.

Propaganda manages to “capture” the “emotions” of the people by using a plethora of factors, including ongoing economic and security problems. However, in our blog, we will review merely the emotional pillars of the propaganda structure, and its main patterns and results.

Propaganda structure
The provocativeness and focus on emotions largely determine the effectiveness of the Russian propaganda. Modern Kremlin propaganda, in contrast to Soviet, is devoid of ideology or logical coherence. Often, messages are contradictory, even if they relate to the same story. For example, government propaganda spread 138 contradictory false narratives about the poisoning of the Skripals.

It is worth noting that the seemingly incoherent process, devoid of ideology, is in fact fully structured, and its purpose is to create an impulsive emotional momentum, where the truth is neglected, i.e., the Kremlin creates one or more false realities, and the audience connects to this falsehood via a simple and provocative message. The content of the message is so emotional that it easily penetrates the human consciousness, triggers subconscious impulses, and takes them into an emotional-illusory world where propaganda has a ready-prepared recipe for a “logical” defensive solution: distancing from the active political process or consolidating around the ruling regime.

It is a difficult and almost futile process to counter the kind of propaganda that exploits emotions with dry argumentation. Any exposure/criticism or public protest against the Kremlin’s propaganda is linked to a plan for war, revolution, and chaos. Their main pillar of propaganda is now the inducing of fear and hatred in their audience, which thus puts on hold any public demand for human dignity and freedom.
Before discussing this fear and hatred as pillars of propaganda, let’s review what that propaganda has been up against.

The main target of propaganda – “The Western Threats”
Following the collapse of the Soviet Union, efforts the weakened Kremlin made to cooperate with the West revealed to it that the West is accompanied by “dangers”.

The second “threat” is criticism, which is a natural extension of democratic political culture. The West criticizes non-democratic regimes and demands justice in governance and protection of human rights. Western criticism of Russia’s authoritarian political system could potentially increase domestic distrust of the regime, giving voters legitimacy for public protest. This would not only make the regime unpopular over time, but would put its inevitable removal on the agenda.

The third “threat” is the West as an alternative to Russia in the region. Russia is no longer the only player and center of gravity in the region. The West has offered substantial material benefits and all other types of development assistance to post-Soviet countries that choose the path of democracy.

The Russian government, whose main concern is to maintain power and its control over neighboring countries, began to fight these Western “threats” with propaganda of fear and hatred, silencing the voices calling for human dignity and freedom.

Fear – the emotional basis of propaganda
Propaganda of fear is based on the memory of the “enemy” (external threat), and aims to scare Russian citizens. Besides the fear, everything negative is to be associated with this “enemy”. The “enemy” was the collective West (US and EU).

The propaganda of fear had two stages. First – outline the goals of the “enemy”, which the propaganda presents as follows: The West desires war, chaos, and instability. The relevant propaganda seeks to convince its audience that the West is meddling in Russia’s internal affairs, as if to “promote democracy”, criticizing the policies of the existing regime and forcing upon it a supposedly “just” standard. Propaganda dictated to the audience a “logical” solution to free the country from any influence of the West in order to protect the country’s sovereignty.

In order to convince Russian citizens that the West wanted a war, and to associate war with the West, the Kremlin used the bloody conflicts that arose as a result of the breakup of communist Yugoslavia. The aim was for the viewers to associate the videos and photos of bombed infrastructure, murdered children, burned houses, and tortured, displaced people spread in the media with NATO’s military force. The Russian propaganda, with the involvement of state and private actors, claimed that the West had attacked Russia’s ally, Orthodox Serbia, and that this terrible war was the result of Western policies. The reality was very different – NATO in fact stopped the ethnic cleansing of Bosniaks and Albanians by Serbia and brought peace to the region.

Part of this propaganda stage was to later equate the causes of terrorism and various conflicts with collective Western politics. According to the propaganda, this was the result of and forced counter-aggression to the West’s “willingness” to impose the same, supposedly just, style of governance on the rest of the world.

The second stage in the structure of the propaganda of fear is to connect the “external threat” (foreign enemy) with the “internal threat” (domestic enemy), which was formulated as follows: The West uses internal opponents of the regime to create chaos and revolutions. The West finances criticism of the government (media, non-governmental organizations, activists, opposition). The West organizes coups d’états and brings to power marionette politicians. The “logical” solution for propaganda purposes was to keep a distance from critics of the government because they were associated with the “foreign enemy” of the country.

The Kremlin has used this basic propaganda template to deal with domestic situational crises, for example, when there were internal protests against Putin’s policies (the dissident march in 2006-2007, the actions organized by “Strategy 31” in 2009, the “Million March” demanding fair elections in 2011-2012, the demonstration demanding the release of opposition leader Alexei Navalny in 2013, and a Russian anti-war rally organized by Boris Nemtsov on March 1, 2015 in support of Ukraine. Before the rally, on February 27, Nemtsov was assassinated, but the rally still took place. The Kremlin propaganda linked these rallies and the anti-corruption protests of 2017-2019 to the West, as if they were Western-sponsored riots aimed at encouraging radicalism in Russia in the name of democracy. During the protests, the Russian special services demonstratively arrested the “radical” organizers of the rally on “connections with the West”.

The equating of “external threat” (the West) with “internal threat” (protests) was preceded by peaceful revolutions in Georgia and Ukraine in 2003-2004, and the 2004 expansion of the European Union with 10 new members, most of which were former communist countries. Added to this was the explicit foreign priority of the USA and European Union to promote the spread of democracy in the region.

It was from this period that the Kremlin’s propaganda saw the West’s “plan” behind popular anti-government protests: Where the peaceful revolutions in Georgia and Ukraine actually represented the victory of the will of the people over the rigged elections, according to Kremlin disinformation propaganda, it was a coup d’état organized by the West at the Russian border to bring into power its own proxies.

The government’s propaganda of connecting the “external threat” with the “internal”, and intimidating the audience with riots, resulted in the disruption and polarization of the protest unity, consequently marginalizing demonstrations, and finally mobilizing voters around the Putin regime.

Since the West was a “threat”, the Kremlin’s propaganda declared its bordering countries and allies of the West – Georgia and Ukraine – as a “threat” also. The small successes of the European integration of these countries enhanced the Kremlin’s disinformation and aggressive campaign against them, which on the one hand was again supposed to mobilize the voters internally through the approach of the “external threat” and, on the other, was supposed to see the West abandon its attempts to spread democracy, as Russia threatened war against the neighboring countries so as to legalize the Russian spheres of influence.

Putin openly demanded this. In 2007, one year before his invasion of Georgia, in a speech at the Munich Security Conference, Putin demanded that the West enable a multipolar world which allowed multiple spheres of influence. Putin declared that since the planet was under the dictatorship of one country (America), Russia would not allow a unipolar (only American-ruled) world, and would risk going against American hegemony.

Similarly, after the full-scale invasion of Ukraine in 2022, Putin reiterated that this “operation” (Russia’s war in Ukraine) would shatter the US-led world order and shift the world from American liberal-global egocentrism to a multipolar system.

The Kremlin’s wars in Georgia and Ukraine were unsuccessful in forcing the West to agree to redistribute the spheres of influence and abandon the promotion of democracy; however, the propaganda of fear, invigorated by the approach of the “external threat”, gathered voters around Putin once again.

Hatred – the emotional basis of propaganda
To keep it at a constantly high level, the Kremlin feeds its propaganda of fear with propaganda of hatred. Along with fearing it, the inhabitants of Russia must also hate the West. Therefore, since 2008, identity-related messages have been added to the propaganda of fear: The West is fighting religiosity – Orthodoxy; The West is against the concept of family and traditions; The West imposes over us pedophilia, homosexuality, and a depraved lifestyle.

According to the Kremlin’s hate-propaganda, the West is fundamentally unacceptable because of its values and way of life.

The propaganda of hatred – “spiritual Russia vs the depraved West” – worked. A 2018 Levada-Center survey found that 53% of Russians did not consider themselves “people of Western culture”, and 45% had a negative attitude towards the Western way of life in general. In addition, 75% of respondents considered Western countries to be the “enemies of Russia”. By comparison, indicators of 19 years ago saw 70% of the respondents considering the Western countries as a model for the development of Russia.

The results indicate that in the early 2000s, before the propaganda took hold, Western values and the development model were acceptable and shared by Russian citizens. As a result of the Kremlin’s 22-year propaganda, however, the West has become fundamentally unacceptable.

Conclusion
The answer to the question of whether the Kremlin will continue to “capture emotions” depends on the political system in Russia. If the Putinist authoritarian style persists, then the “emotional capture” will become increasingly intense, as it is precisely the combination of fear and hatred that helps the ruling regime maintain credibility and fight Western “threats”. However, at the same time, it backs the regime into a corner. If the Kremlin reduces any of those mechanisms, then the population will react to the deteriorating economic situation inside the country and the impotent state institutions, which may lead to anti-government protests. As such, the Kremlin’s propaganda needs to constantly maintain those impressions of threat (generating fear) and hatred in order to maintain the unconditional support of the audience. An integral part of maintaining this unconditional support is the constant struggle with the “foreign enemy”, even against neighboring countries who crave Euro-Atlantic integration.

BLOG by Nino Imedashvili for GFSIS